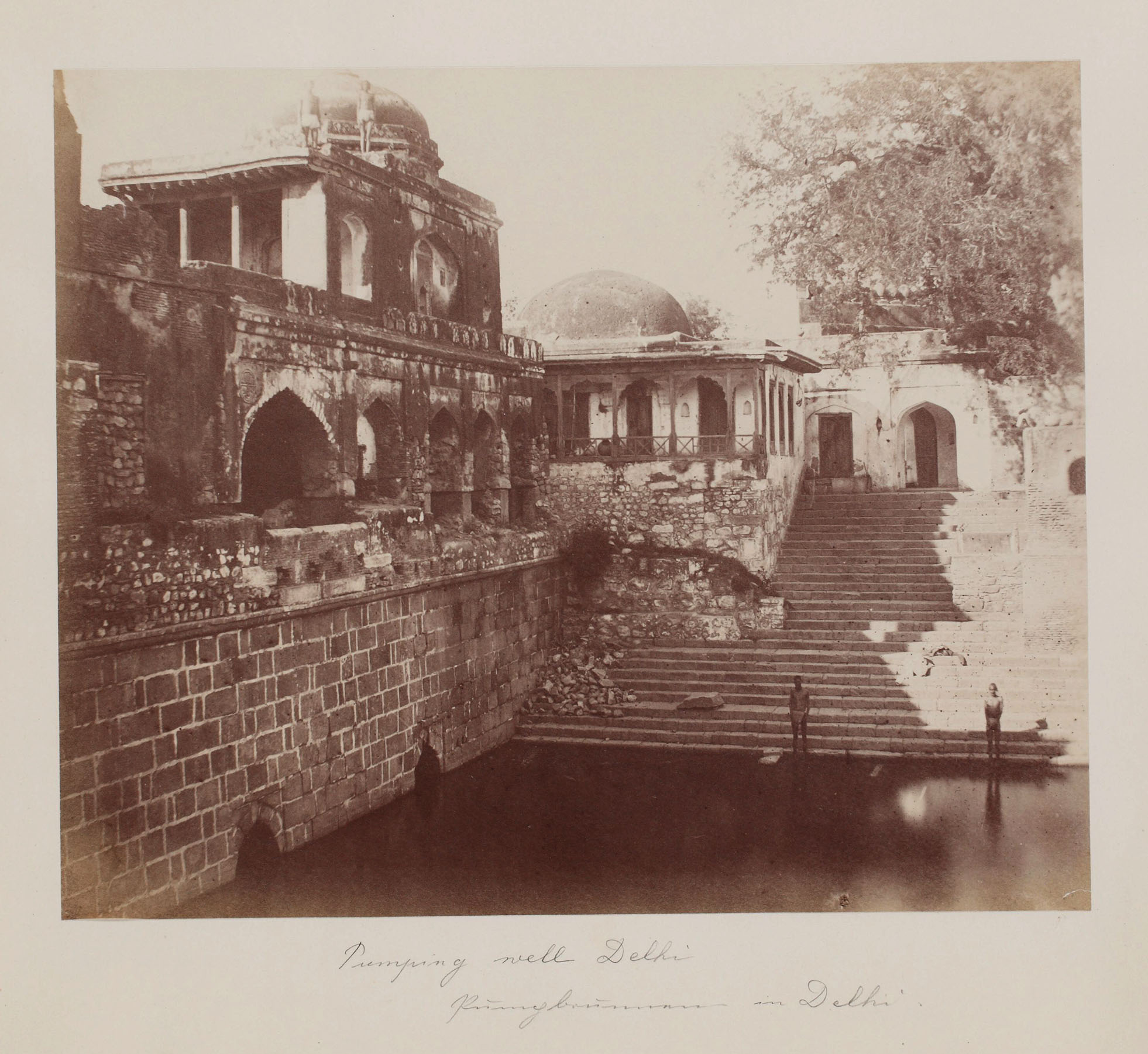 “…for 1,000 years Delhi evolved a continuous and sophisticated water system. The philosophy was simple: if you take, you must put back. Whenever they sank new wells they also built new tanks. These tanks captured monsoon rain so that it did not run off the river, and they allowed this water to gradually seep down and recharge the water table. By the Mughal period, Delhi had 800 of these water bodies. Some were small, some as big as lakes.”

At the height of their popularity, it is believed there were over a hundred baolis in the city of Delhi. A baoli or stepwell is a communal space built to provide citizens access to underground springs. In the Medieval era, stepwells were marvels of architecture and a component of urban planning. Because they were shared spaces, they fostered a culture of conservation. But as Delhi found more modern ways to provide water to its growing citizenry, this culture became a casualty. Only 30 stepwells survive in the capital today, some of which owe their existence to recent restoration efforts.

Stepwells are commonly found in the western half of the Indian subcontinent and its more arid regions. Some of the more famous ones outside Delhi include Chand Baori in Rajasthan, Rani ki Vav and Modhera in Gujarat, Hampi Pushkarani and Lakkundi in Karnataka. Pakistan is home to a few, but there is no evidence of this type of well existing in any other part of the world. 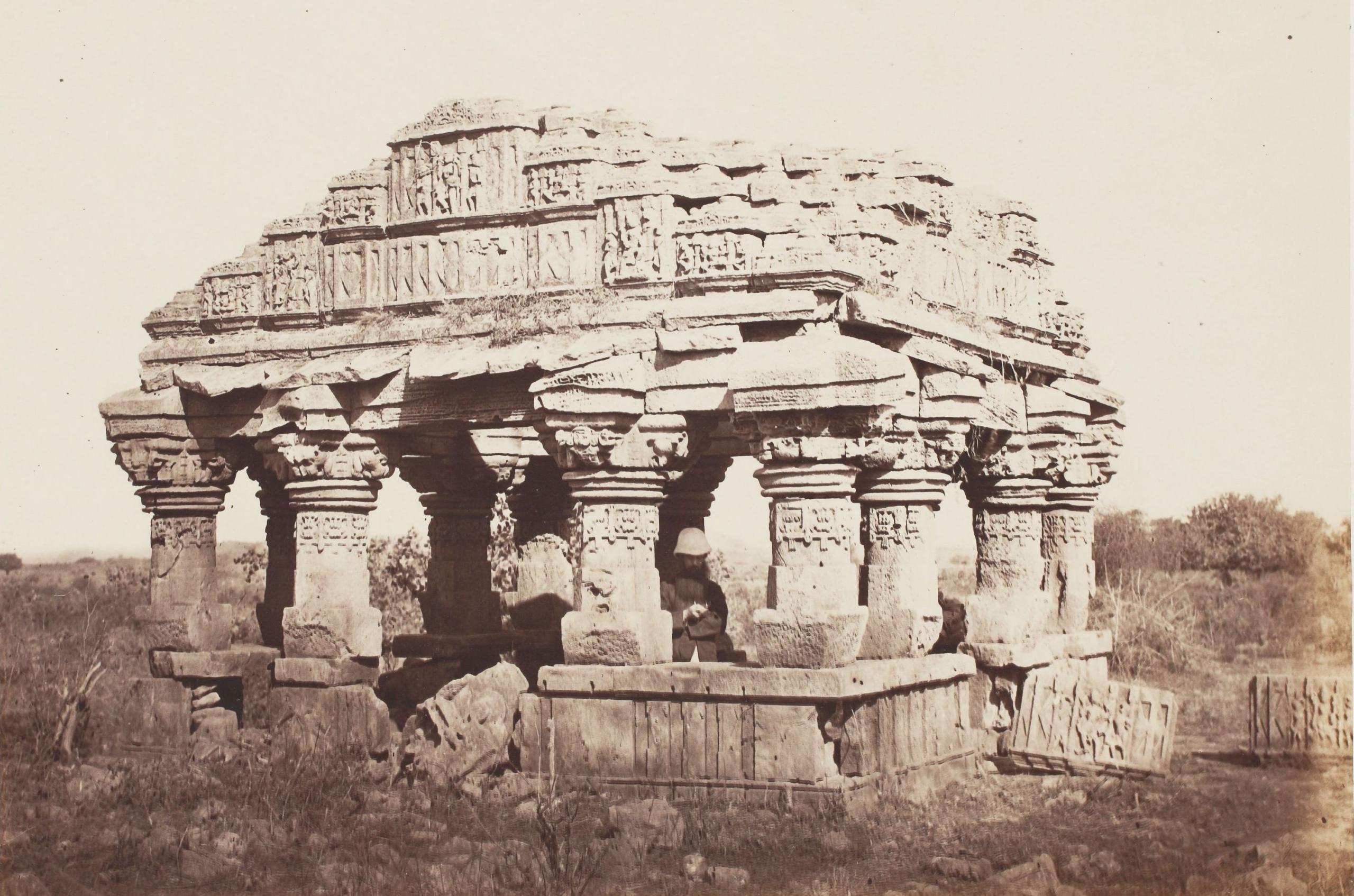 Chattri or pavilion at the entrance to the Vikia Vav, near Mukhana in Kathiawar, Gujarat 1874 from the Sarmaya collection 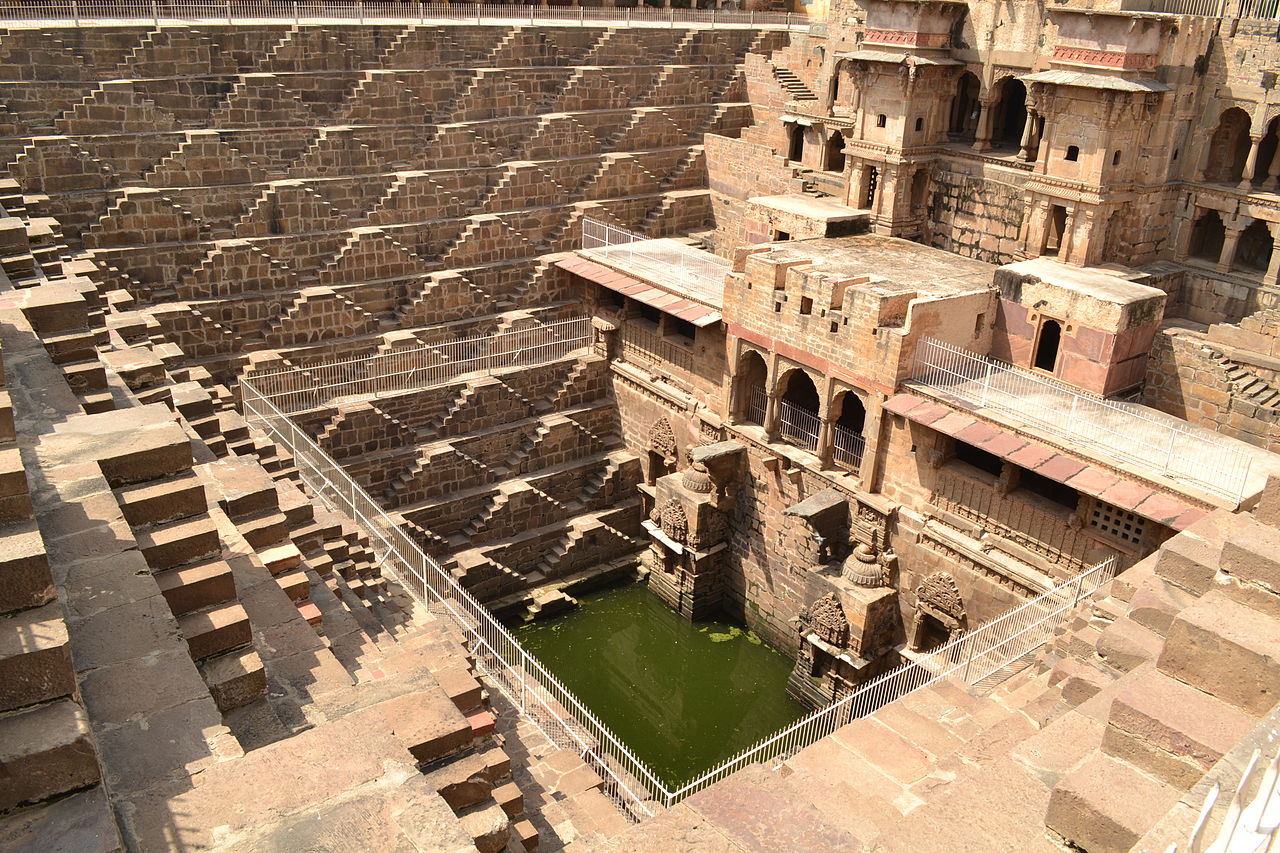 Stepwells were constructed to harvest rain during the monsoons, recharge aquifers and help people survive periods of water shortage. The earliest ones date back to the 3rd Century BCE and one of the oldest and largest stepwells still standing is the 9th-Century Chand Baori. With time, their design went from utilitarian to ornate. Some stepwells housed temples, and some were built with elegant carvings, pavilions and other architectural flourishes. Some Delhi baolis were constructed only to conserve water, others also provided shelter to travellers and caravans.

“The science behind baolis is amazing. The architecture allows for processes like sedimentation and the play between pressure and surface area to work,” says Vikramjit Singh Rooprai, a heritage activist and educator, and author of Delhi Heritage: Top 10 Baolis. The book is part of a series that will explore the built heritage of Delhi. Vikramjit chose baolis as the subject of the first instalment partly because the former IT professional’s passion for heritage education was sparked during a visit to Rajon ki Baoli in 2009. He goes into greater detail about the science undergirding these structures in this video.

In an email interview with Sarmaya, Vikramjit shed light on the role played by baolis in the history and cultures of Delhi. Most of the city’s surviving stepwells date to the Tughlaq era, he tells us. While the general design principle is the same, baolis are customised for the geography they serve. Their construction considers such factors as the depth of the groundwater table, the population of surrounding towns and the presence of minerals underground. Delhi’s baolis were built to last. Vikramjit says, “When a baoli was being constructed, a wooden ring would be placed on the ground to mark where the digging should start. This circle formed the rim of the well. When the Aga Khan Trust for Culture was restoring Nizamuddin Baoli, they found the original wooden rim intact from several centuries ago.”

Stepwells were once lively social spaces. An unwritten rule prescribed that men would use them in the mornings and evenings, and women would gather to bathe and collect water at noon. Some baolis house cool inner chambers and niches along the walls for lamps, suggesting they served as resting houses that were also used at night. Shaped by continuous intimate contact with the people who used it, a baoli developed its own unique character. If the Purana Qila Baoli has all the charm of a treasure hidden in a fort, Agrasen ki Baoli wears the unmistakable air of celebrity. 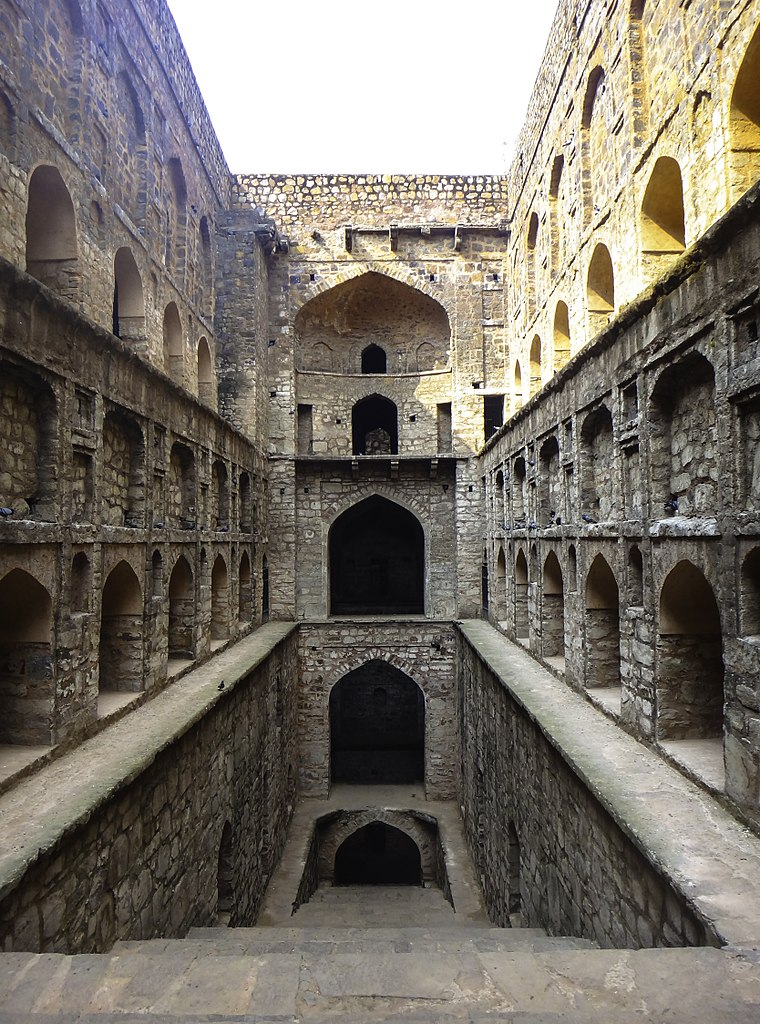 Named for a legendary king who is believed to have ruled Agroha (present-day Haryana), the stepwell was rebuilt in the 14th Century in a style characteristic of the Delhi Sultanate era. The stately and atmospheric Agrasen ki Baoli is a favourite with travellers, filmmakers and photographers. Its austere symmetry, cathedral-like scale and the 108 steps leading to undisturbed darkness, all make this a popular setting for ghost stories.

Built in the 13th Century by the first of the Delhi Sultans, Iltutmish, Gandhak ki Baoli is one of the largest stepwells in the city. It was dedicated by the Sultan for the use of Sufi saint Qutbuddin Bakhtiar Kaki. Later, Gandhak ki Baoli became a spot for locals to gather socially and watch the more intrepid among them dive into the well. Next door to it is Vikramjit’s favourite: “History and architecture wise, I like the Rajon ki Baoli. It was the most ornate stepwell and is associated with the person who brought Babur to India. Daulat Khan, the governor of Lahore, was buried in this Baoli after his fate took a U-turn with Babur and made him a traitor to the Lodhi empire.”

A miraculous aura hangs over the 14th-Century Hazrat Nizamuddin Dargah Baoli. The construction of the baoli began under the direction of beloved Sufi saint Nizamuddin Auliya in 1321-22. At the same time, Delhi’s Sultan Ghiyas-ud-Din Tughlaq was building his glorious new capital, Tughlaqabad. The Sultan forced everyone building the baoli to go to work on his dream project instead. Hazrat Nizamuddin requested the labourers to build the baoli at night, after their work for the Sultan was done. When he found out, an enraged Tughlaq clamped down on the sale of lamp-oil so no one could work at night. The saint cursed the fort of Tughlaqabad, which was soon abandoned for lack of water, and instructed that the lamps around the baoli be lit with water—it worked and the stepwell was finally built. Ever since, Nizamuddin Baoli has been a mainstay for pilgrims who consider its waters to have miraculous properties. 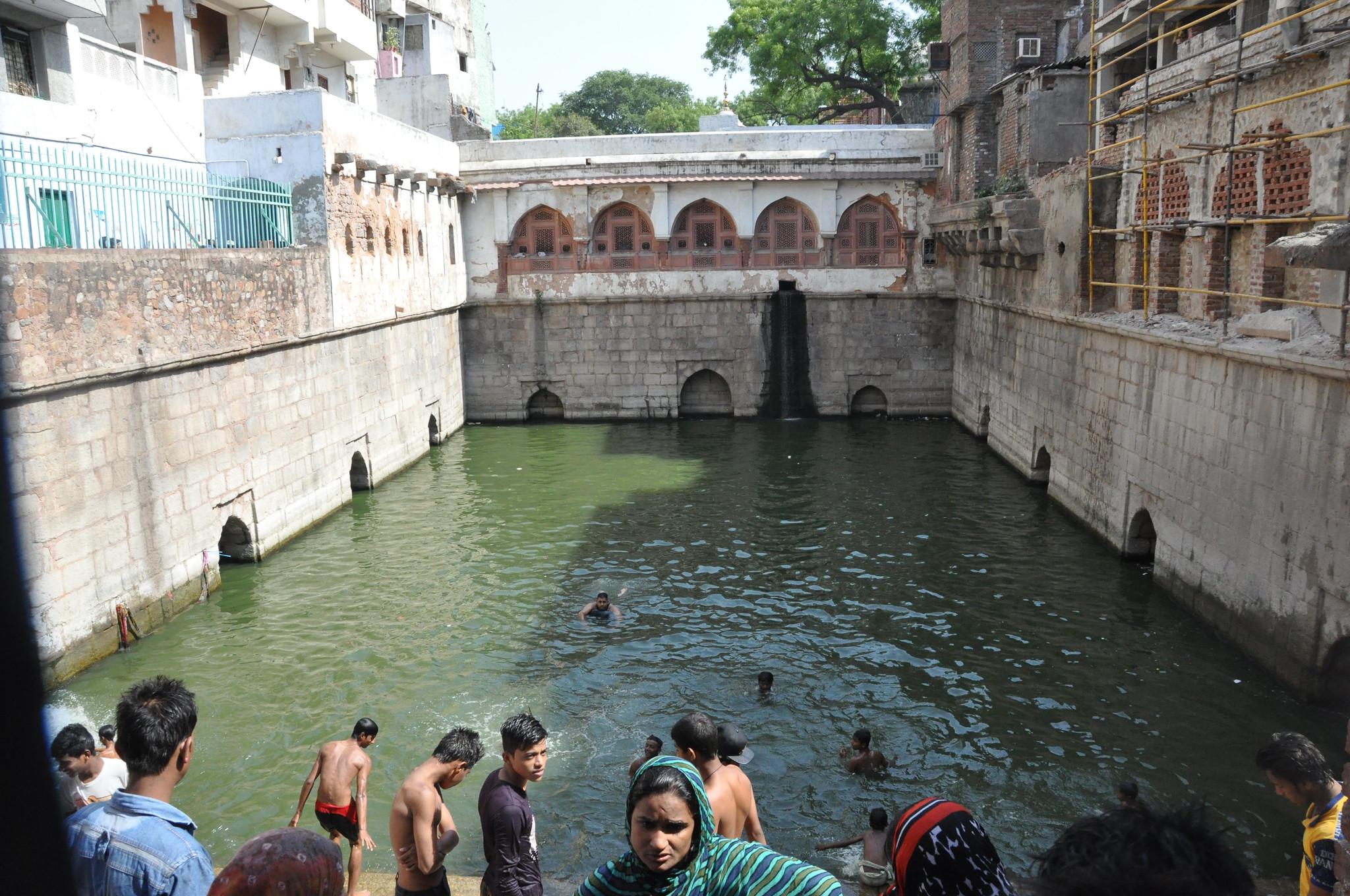 Not even divine protection has been able to keep Delhi’s baolis from falling into an abject state of disrepair. They have survived invasions, earthquakes and drought, but have fallen to pollution, apathy and neglect. Stepwells are important symbols of the city’s resilience and as the world today faces climate change and water crises, they have important lessons to teach us. Vikramjit says, “Baolis are still connected to underground water channels and if there is proper will, we can use them to save water. We need adequate catchment areas demarcated around every baoli, which usually don’t exist due to urbanisation. Wherever it does exist, we need to formulate a method to fetch and utilise stored water, which will require collaboration between multiple government agencies and in India, this is not an easy task.”

While water conservationists have their work cut out for them, heritage activists and organisations have begun the process of preserving the architectural splendour of Delhi’s baolis. Hazrat Nizamuddin Dargah Baoli was restored through a public-private partnership between the Archeological Survey of India (ASI) and the Aga Khan Trust for Culture. Last year, the Delhi Jal Board announced they had taken on the restoration of three baolis, two at Tughlaqabad and one in Mehrauli. 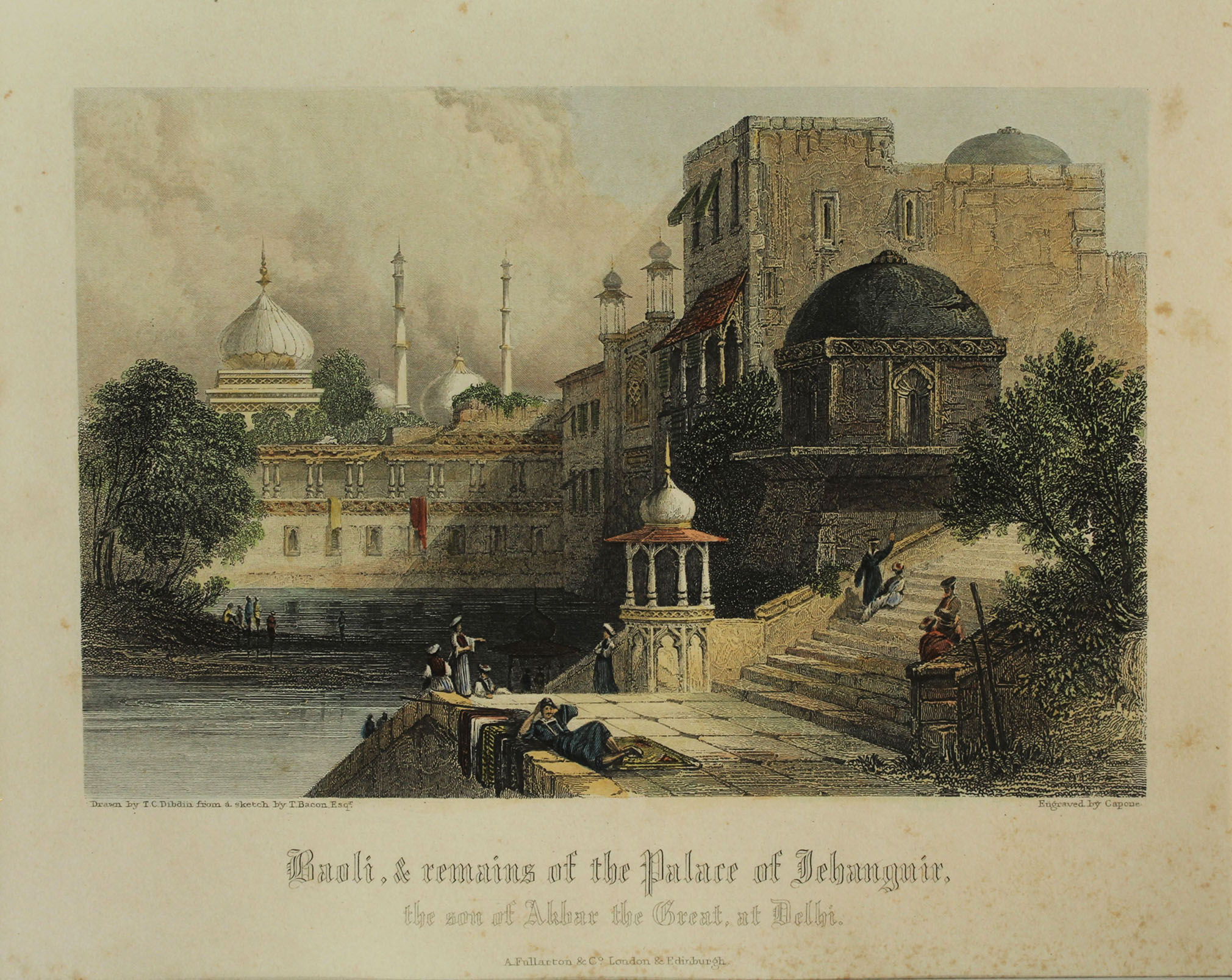 This 1839 engraving from the Sarmaya collection is a fictionalised rendition of a stepwell. Despite the misleading title ‘Baoli and remains of the Palace of Jehanguir, son of Akbar the Great, at Delhi’, no such monument existed in the city

With inputs from Sravya Ronanki