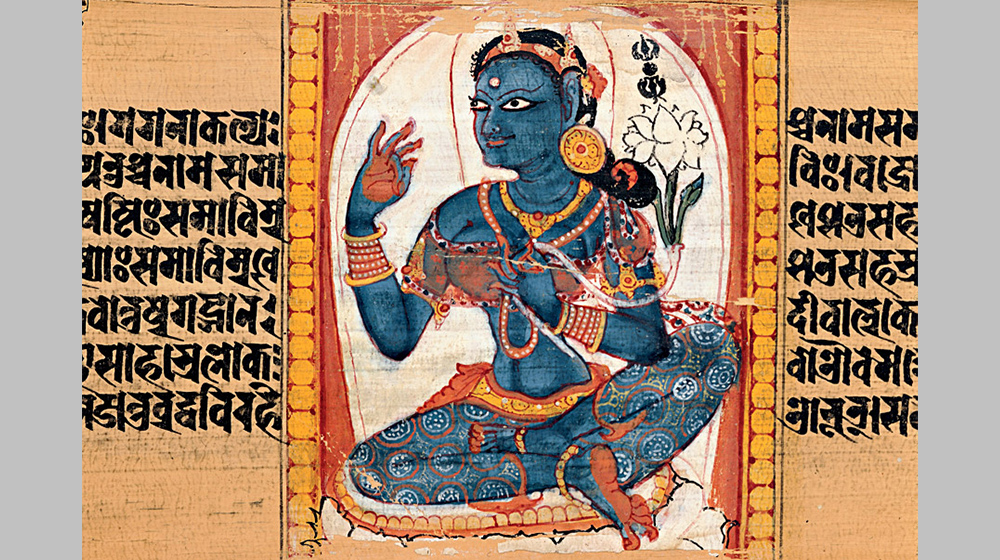 Painting in India is many things: an ancient legacy nurtured by generations of creators; a layered art form that developed through centuries of trial-and-error; and a priceless reflection of our shared histories and syncretic pasts. It’s hard to imagine any one word or phrase that would do justice to the scale and scope of Indian paintings but the word most commonly used seems particularly reductive.

Artworks born of the subcontinent’s many art traditions—over centuries, across cultures and representing whole communities—are often clubbed under the label of ‘miniatures’. According to the Merriam-Webster Dictionary, the word is derived from the Latin ‘miniam’, the name of a pigment used to develop the colour red. By extension, ‘miniare’ meant ‘to colour’. In Italian, the meaning of the word broadened to mean ‘to decorate a manuscript’ and eventually ‘miniatura’ came to refer not only to manuscript illustrations but also to any small portrait or painting. When early colonists in India encountered such works, they started calling them ‘miniatures’ and the label just stuck, soon attaching itself to any product of India’s many painterly schools.

Eventually, of course, miniature came to mean anything rendered on a small scale. And this is where the problem of perception began. The word represents nothing of the vitality or diversity of indigenous traditions; it suggests that these artworks are restrictive in size or function, which they aren’t; and most of all, it insinuates that what Indian painters create is somehow smaller in scale or scope than the art produced by their counterparts elsewhere in the world. However, some words have a stubborn way of sticking in the imagination and it looks like we are stuck with ‘miniatures’ for a little longer. All we can do is use every opportunity to qualify it and demonstrate just how vastly it under-serves the worlds it represents.

Indian paintings vary greatly from region to region when it comes to techniques, materials and processes. While we may not be able to elaborate on every school and style, we’ve attempted to structure them into a concise narrative and present an overview here. 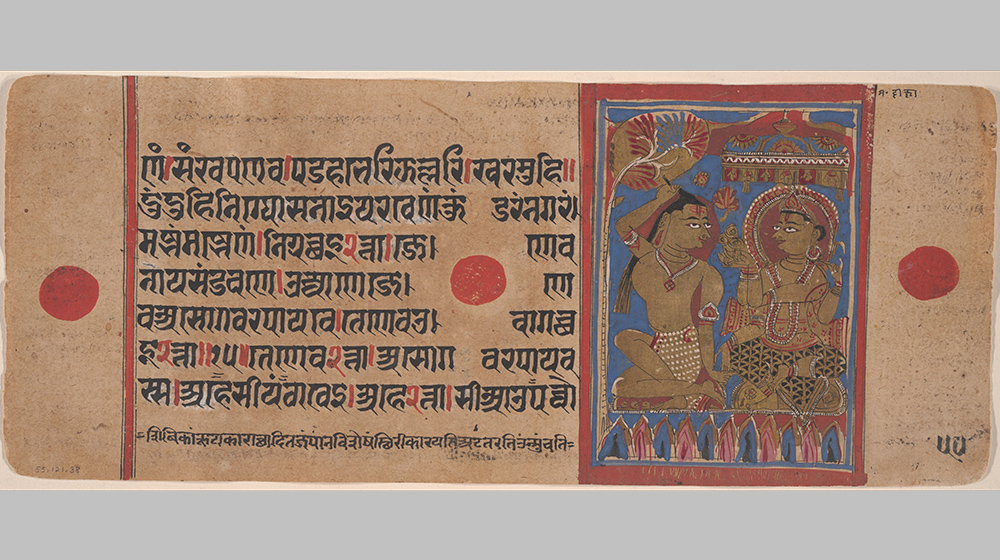 The earliest surviving ‘miniatures’ of the country are from 11th century eastern India. They are in the form of manuscript illustrations and calligraphy that accompanied Buddhist religious texts on palm leaf and featured on their wooden covers. Over 200 years old and made in the region encompassing Bengal, Bihar and Nepal, eastern Indian paintings were remarkable because they seem to be influenced by the ancient mural traditions. This might lead one to speculate that there was a common visual language understood across the country, from the cave walls of Ajanta to the manuscript covers of the Astasahasrika Prajnaparamita.

At the same time in the western corners of the country, a similar tradition developed thanks to the patronage of Jainism. It took root in present-day Rajasthan and Gujarat and comprised of illustrated manuscripts on palm leaf and paper. They were mainly stories about the Jain tirthankaras or other saints, and thus had immense scope for narrative illustrations. The iconography that gradually developed in Jain manuscript paintings was characterised by flat backgrounds, 3/4th profiles, narrow waists, full chests, beautiful details of textiles and that remarkable drawing of the elongated eye that sometimes extended beyond the contours of the face.

A watershed moment occurred with the arrival of paper in India in the 14th century, and the arrival of Islam. The Sultanate kingdoms with centres in Delhi, Malwa and Jaunpur commissioned the illustration of a whole range of Persian texts. But the artists they employed were of course local men trained in native Indian styles. For the first time, the visual vocabulary of India witnessed the merging of Indian and Iranate elements, a process that would reach its peak during the reign of the Mughals a few centuries later.

The Malwa Nimat Nama (now at the India Office Library, London) and the Laur Chanda manuscript (now at the CSMVS) are some remarkable examples of this early syncretism. In the paintings, one witnesses men and women of various nationalities milling about, creating perfumes and frying samosas. In one spirited instance, two girls are shown fighting over a boy! 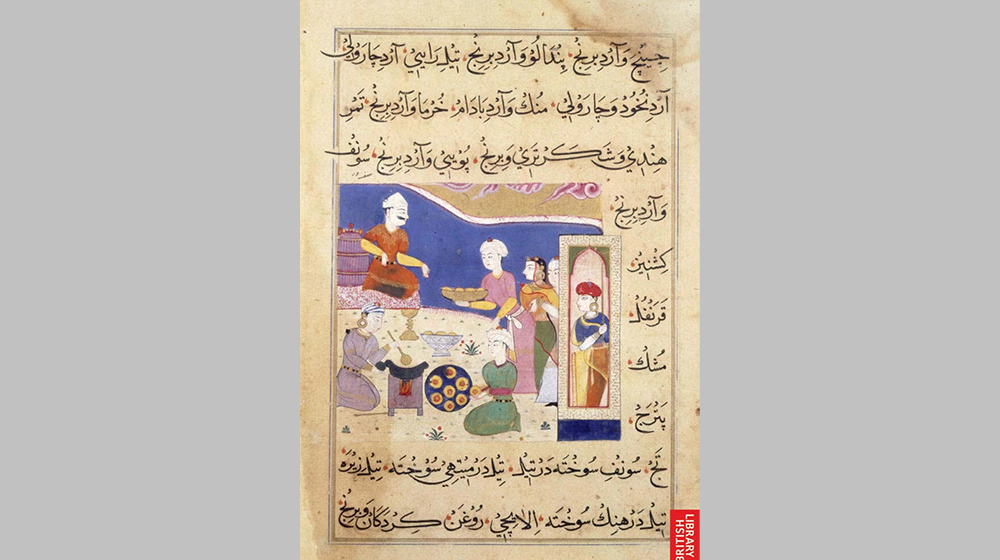 By the early 16th century, the Hindu kingdoms of Rajasthan were busy creating what we now know as the ‘Early Rajput School’ of painting. Broadly, the iconography belongs to the Chaurpanchashika style, named after the Sanskrit text by Bilahana and literally meaning ‘ fifty stanzas of the love thief’. The style generally employed a continuous pictorial narrative with flat backgrounds and high horizons. The body types were marked by full breasts and narrow waists, faces in true profile, large eyes and sharp noses.

The heroine of the Chaurapanchashika, Champavati is the epitome of this style. As she steps out of her house to meet her lover in the dead of the night, her gait is as graceful as the swan’s and her eyes like a deer’s. (Stanzas above each folio lead one from the text to the image.) Bees abandon the larger-than-life lotuses at the pond and now hover over her. Inside the house, the bed is readied with flowers, perfumes and paan for an anticipated night of love-making. 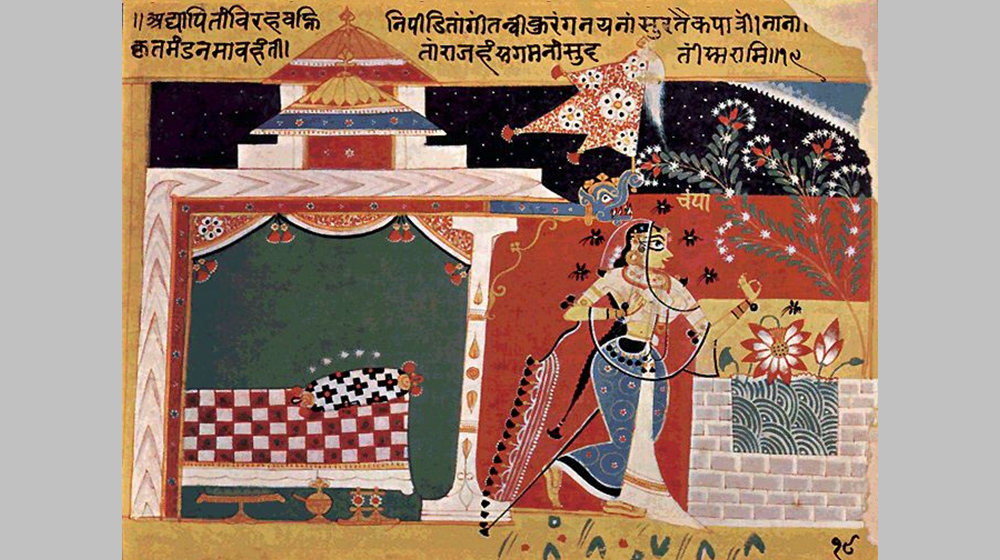 Amid this Renaissance-like atmosphere of early medieval India, where poets were singing love-songs and painters were visualising the sacred and the sensuous like never before, a little-known village in northern India called Panipat had just witnessed a war. In 1526, the 1,00,000-strong army of Sultan Ibrahim Lodi clashed with a 43-year-old ‘state-less’ ruler from Central Asia, Zahir-ud-din Muhammad ‘Babur’. Lodi was defeated, Babur took control of Delhi and established the Mughal Dynasty, changing the landscape of Indian art forever.

In addition to being able administrators and strong rulers, the Mughals were connoisseurs of art and culture. Indian paintings from this period are the most well documented and annotated, allowing us to even discover the names of popular court artists.

It was during the rule of Babur’s grandson Akbar that Mughal painting really came into its own. An atelier or karkhana of artists was officially set up, manuscripts were illustrated in large numbers, Hindu epics such as the Ramayana and Mahabharata were translated, and the life and times of the rulers were chronicled in masterpieces like the Baburnama and the Akbarnama. Akbar’s secular attitude was also reflected in how he encouraged the coming together of Iranian and Indian styles, and welcomed the European elements being brought to India by Jesuit missionaries and travellers. 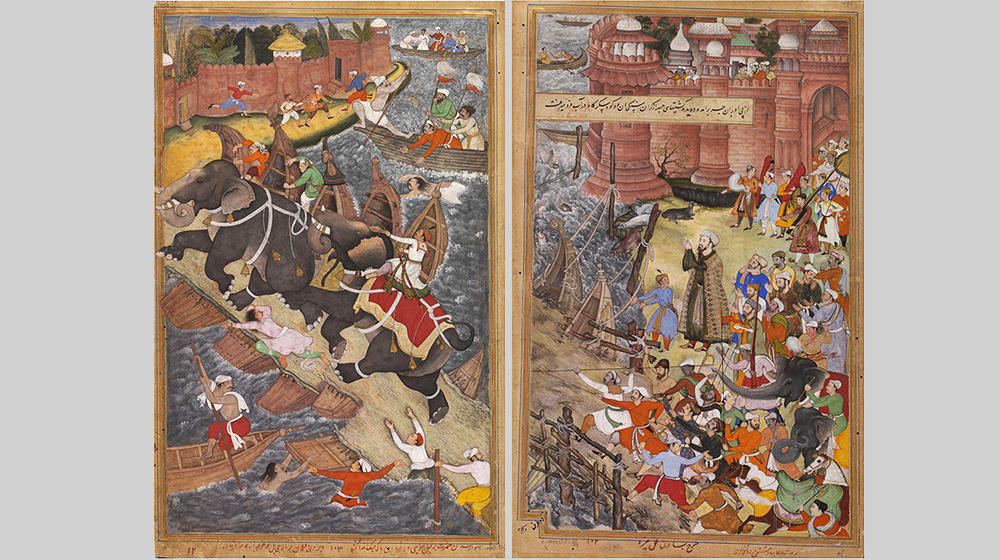 Akbar was followed by his son Jahangir, who was not as interested in manuscript illustrations as he was in commissioning individual paintings. Various genres like durbar paintings, portraits, hunting scenes, etc. were commissioned and bound in exquisite albums to be enjoyed and shared at leisure. Portraiture at this time reached its peak in the court—the depictions of royalty and nobility were rendered with remarkable refinement and with great attention to detail.

The later part of Jahangir’s life also saw the commissioning of allegorical paintings. These are some of the most mysterious and modern among the works of the period, laden with metaphors and symbols, situated in dreamscapes but also making strong political statements. In these paintings, Jahangir sometimes sits atop a sand-clock attending to Sufis, and at other times stands on a globe vanquishing poverty or aims his arrow at the decapitated head of Malik Ambar, an Ethiopian military leader of the Deccan and enemy he never managed to defeat in real life. 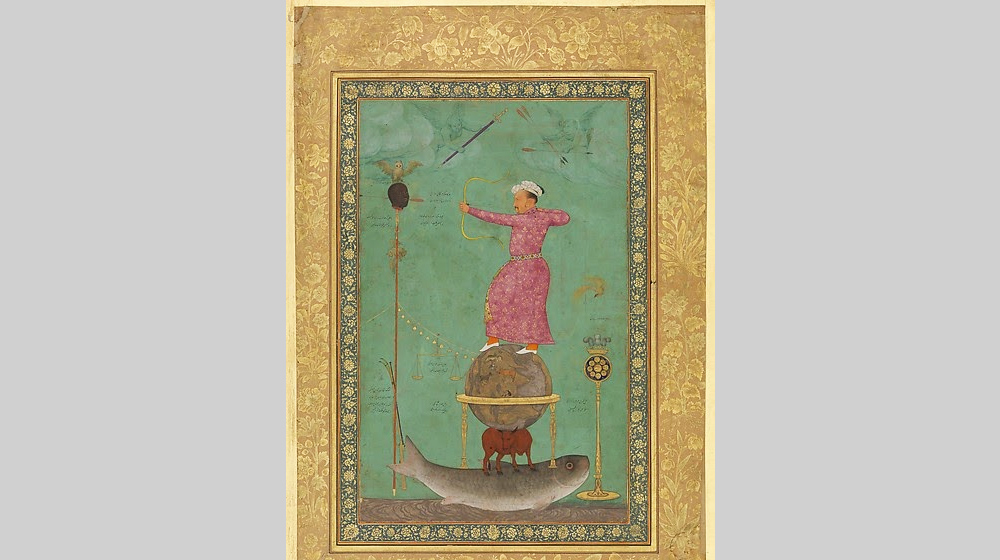 Jahangir shoots at the head of Malik Ambar by Abu’l Hasan. 1616. Image courtesy: The Metropolitan Museum of Art

Under Jahangir’s son and successor, Shah Jahan, the opulence of the Mughal empire continued undimmed and was reflected as much in its paintings as in the durbars and architecture of the age. Much like Shah Jahan’s favourite jewels and precious gems, the paintings he commissioned too seemed to shimmer and glow from within. Artists used gold foil liberally, their compositions were filled with decorative motifs resembling the original pietra dura works, and the likenesses of court nobility were executed in great detail. 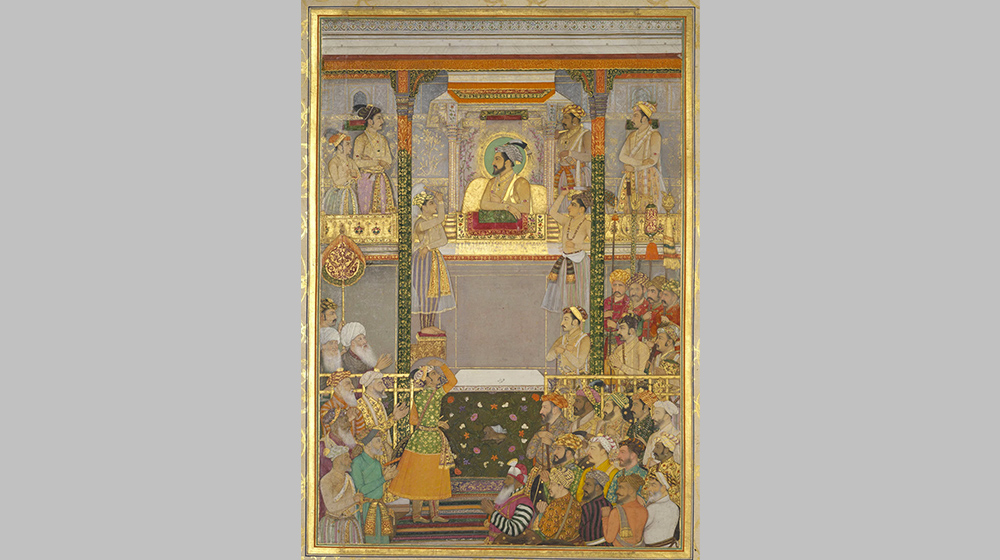 Painters continued to receive patronage under the later Mughals too, but royal commissions declined with the entrance of the East India Company in the mid-1700s. This, of course, began another interesting chapter in the saga of Indian paintings but that’s a story for another time. With the decline of the Mughal ateliers, many artists migrated to centres in Rajasthan and Punjab and further fed the syncretic culture of art-making already prevalent in these regions.

Rajasthan was dotted with multiple kingdoms and rulers, each a patron of the arts. Each state or thikana boasted artist families with their own signature styles working for the royals and the nobility. Centres such as Mewar, Jodhpur, Jaipur, Bundi, Kotah and Kishangarh, among others, rose to prominence as they illustrated page after page of court scenes, hunts, myths and portraits. Each centre, moreover, specialised in a certain style and theme. While the artists of Kotah were expert naturalists, Kishangarh painters preferred to immortalise their king and his beloved in the ‘Bani Thani’ style. 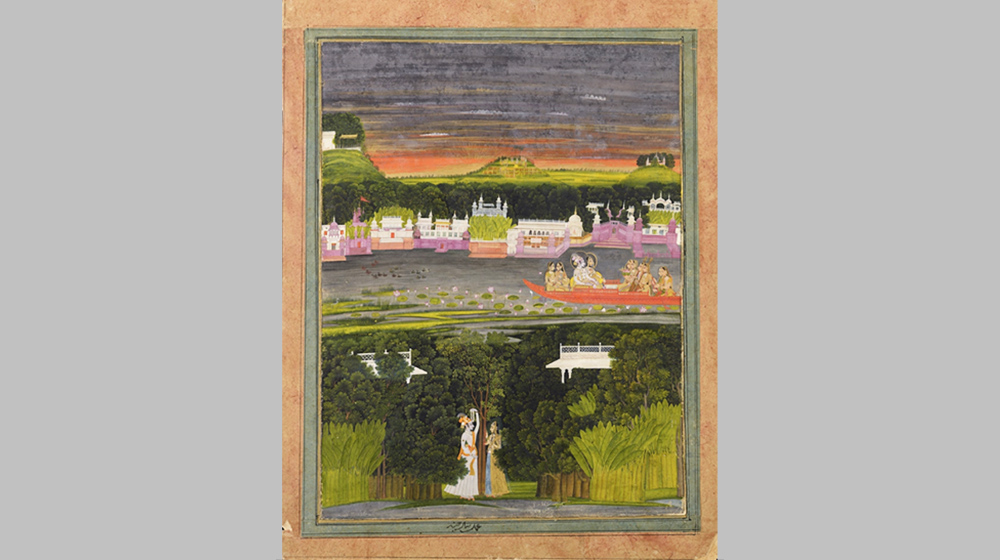 Similarly, a lot of large and small states make up the Pahari or ‘Punjab Hills’ school of painting. The originis of the school are lost to obscurity, but like with the Rajasthani thikanas, artist families called gharanas determined the style of each state here. Of these, the most famous was, of course, the gharana of Pandit Seu, who lived and worked in 18th-century Guler. The oeuvre of Pandit Seu and his sons, Manaku and Nainsukh (who worked at the court of Raja Balwant Singh of Jasrota all his life), came to epitomise the visual vocabulary of the Pahari school. 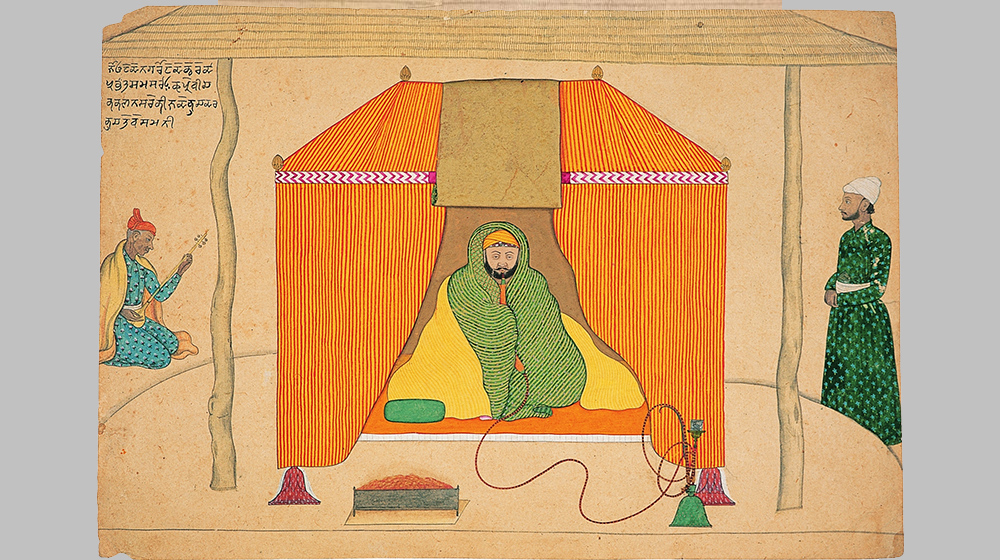 Balwant Singh in a Tent at Nagrota, Pahari, Jammu, attributed to Nainsukh, circa 1760. Image courtesy: Rereeti.org

At the same time that these northern Indian kingdoms were undergoing major developments, the Muslim courts in the south were experimenting and creating their own unique masterpieces. The Deccan courts in Ahmednagar, Bijapur and Golconda housed great patrons like Murtaza Nizam Shah, Ibrahim Adil Shah II and Abdullah Qutb Shah. 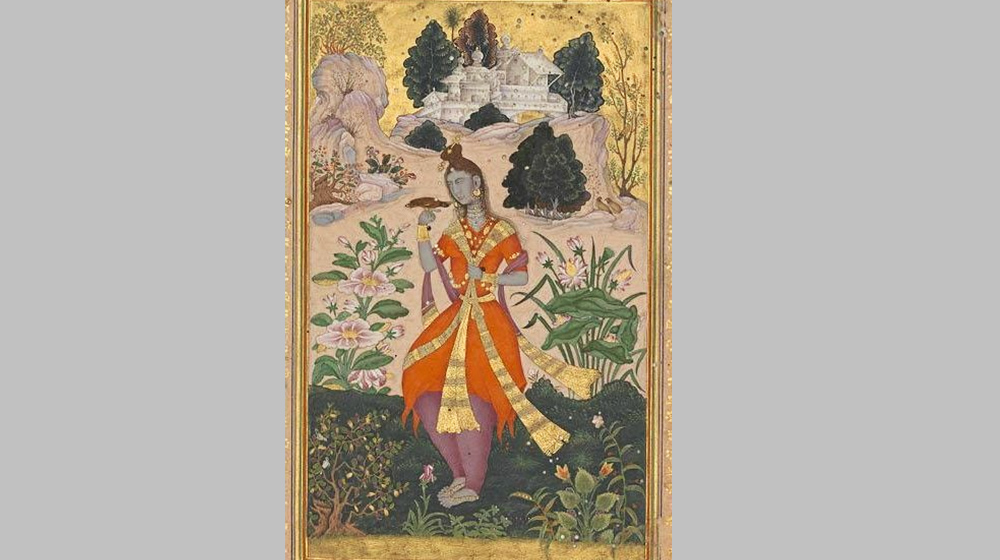 The Deccani school, now considered as important player in the historical development of art in India as any other, was characterised by tremendous cultural complexity and intermingling. The aesthetic sensibilities of the Hindus, Muslims, Arabs, Persians and Africans native to the south created a hybrid when they came in contact with influences from the big Islamic power centres outside India, such as in Iran, and this shaped the art from the region. While in Ahmednagar, men wearing translucent jamas waved muslin cloth over their rulers, mysterious ash-smeared yoginis roamed around magical gardens in neighbouring Bijapur and fantastic islands with speaking trees populated the painterly provinces of Golconda. 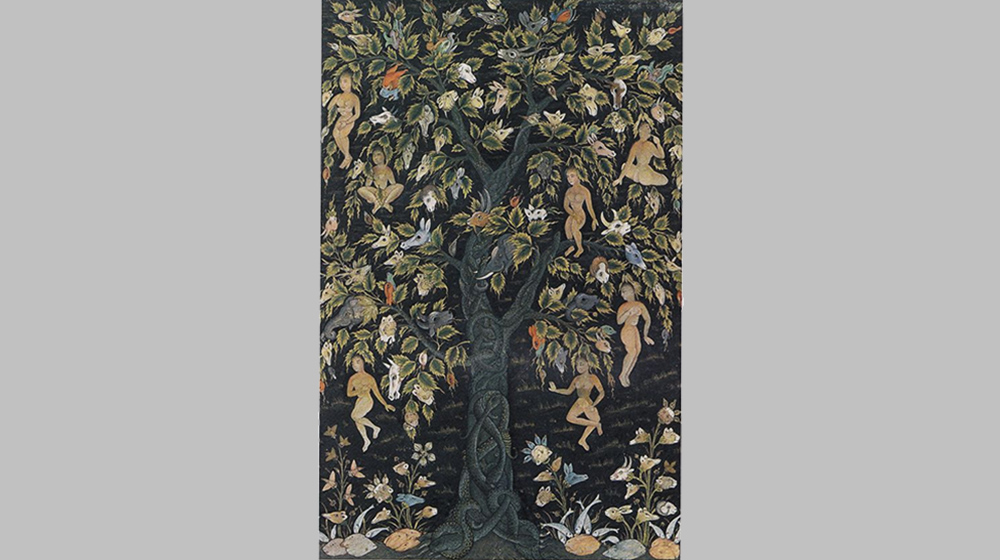 ‘The speaking tree in the island of Waqwaq’. Golconda. Late 17th century. Image courtesy: The Metropolitan Museum of Art

Given their stunning diversity of expressions and the sheer multitude of influences they absorb and transmit, Indian paintings are not amenable to neat, clinical categorisation. In a way, it makes sense that the British chose the first word handy to label this sprawling, ancient, endlessly imaginative enterprise. ‘Miniature’ is as good a description as any other, if only for its delicious irony.