The stage is set. On plain ground, a bamboo frame is erected with a white cloth stretched across it to serve as a screen, with the warm glow of oil lamps shining through. The audience is seated on mats in front of the screen, waiting. And then, the shadows appear. The flat, intricately detailed outlines of wide-eyed, colourful puppets, their moving limbs in the hands of master puppeteers, dancing wildly to the tunes of a troupe of musicians. Welcome to the world of Tholu Bommalaata.

Literally translated, ‘tholu’ means ‘leather’, ‘bommalu’ means ‘puppets’ and ‘aata’ from ‘attam’ means ‘dance’. Thus the dance of leather puppets, Tholu Bommalaata is a shadow theatre art from Andhra Pradesh and some parts of Karnataka. It is one of seven shadow traditions in Southern India, from where scholars say it spread to Indonesia, Sri Lanka and gradually to the rest of Asia. Several words and phrases found in religious texts from the 2nd century like the Mahabhasya and Mahabharata indicate that shadow puppetry — or some form of it — existed as far back as the first millennium BC. The legends of Tholu Bommalaata corroborate the date of origin estimated by scholars. 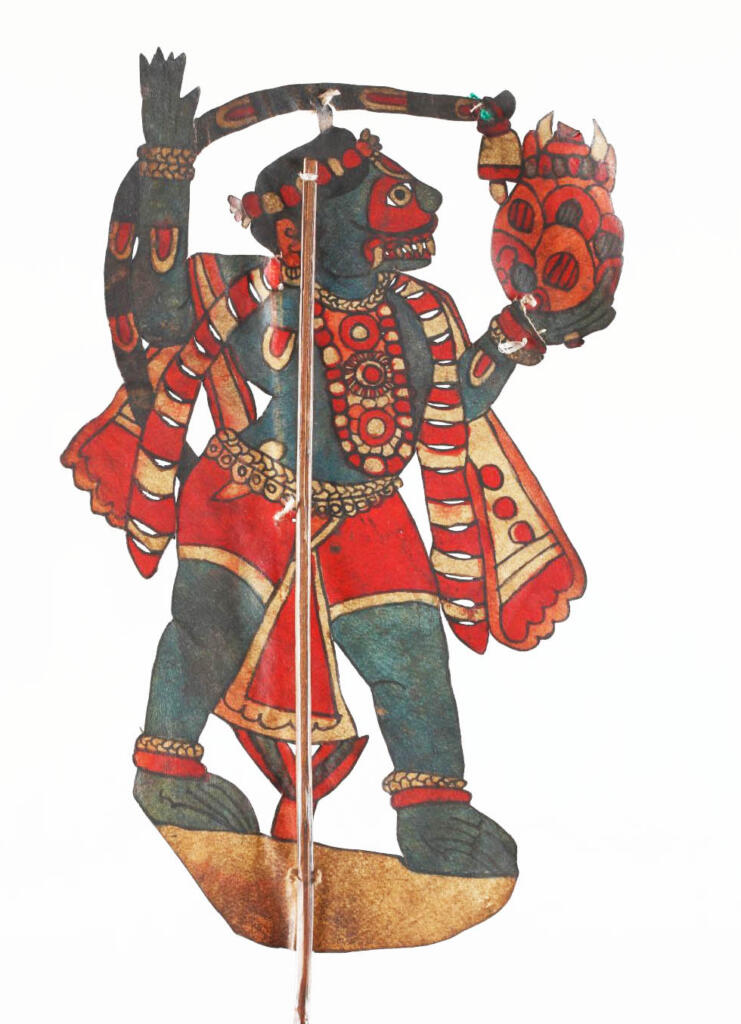 Hanuman in the Ashokavana, leather puppet in the Karnataka style

Shadow puppetry first received royal patronage in Karnataka under several ruling dynasties, the earliest being the Satavahanas in the 2nd century, with other influential patrons like the Rashtrakutas in the 10th century and the Vijayanagara Empire in the 15th century. It was during the expansion of the Rashtrakutas to Maharashtra and Odisha that the art form spread to these areas. Many Marathi-speaking dayatikas or ‘those who paint tanned leather’ moved to Belgaum, Karnataka during this time, later moving to Andhra Pradesh and other parts of southern India. This is the reason that many Andhra-based puppeteers can speak Marathi as well as Telugu. 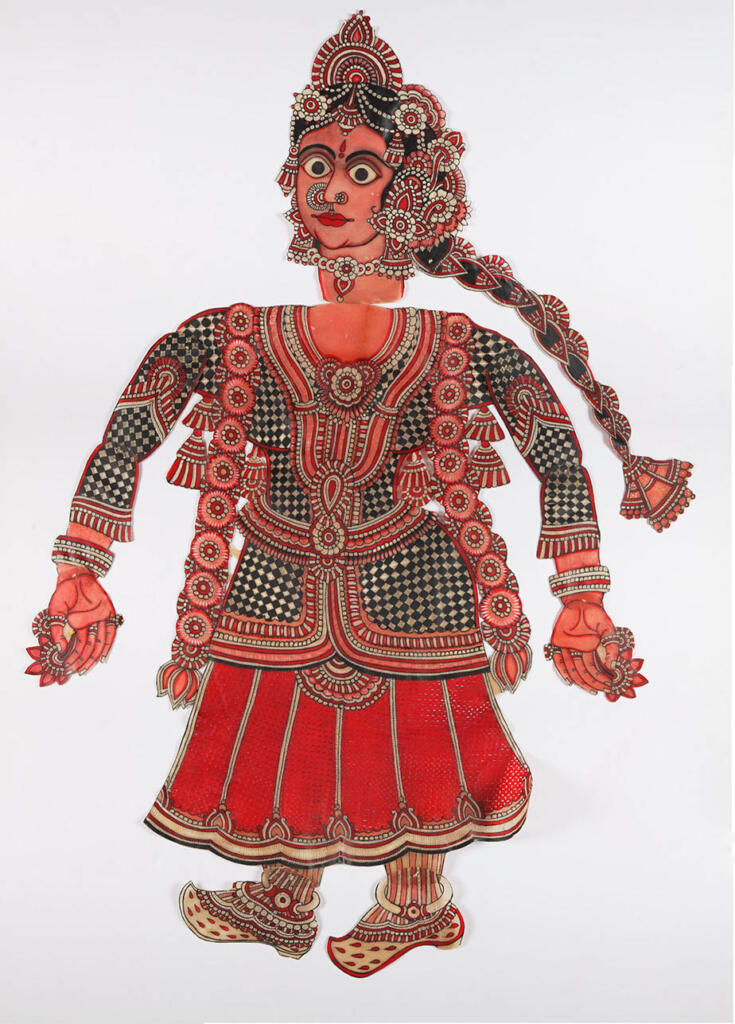 Tara, the Queen of Kishkinda and wife of King Vali and later Sugreeva from the Ramayana

Between the 13th and 15th centuries, under the Vijayanagara Empire, shadow puppetry reached its peak. In the mid-14th century, the establishment of the Bahmani Sultanate increased the influx of an Islamic population in the region, which in turn led to the wonderful influence of Turkish puppetry on the art form, lending us colourful garments and sumptuous jewellery, as well as long beards on male puppets. We see a lack of references from the 16th to 20th centuries in shadow puppet performances. As the Vijayanagara empire and Bahmani Sultanate fell, royal patronage to the tradition shrank significantly, and performances became restricted to temple villages, as is still prevalent today.

Traditionally, the plays were performed in Bhajana, a form of congressional worship involving song and dance. Later, religious texts like the Bhagavata purana, Ramayana and Mahabharata began to be narrated in poetic verse. Under the Kakatiya dynasty in Andhra Pradesh, poet Gona Buddha Reddi was commissioned by his father Vithala Natha to write a script for a play, based on the oral version of Valmiki’s Ramayana, to be performed exclusively by shadow puppeteers. This script was titled the Ranganatha Ramayana and was written in Telugu. The text uses a simple style of dwipada meter, which can be recited as a poem or sung with musical instruments, and features a scene-by-scene narrative, as well as detailed information on colours in which the puppets must be painted. 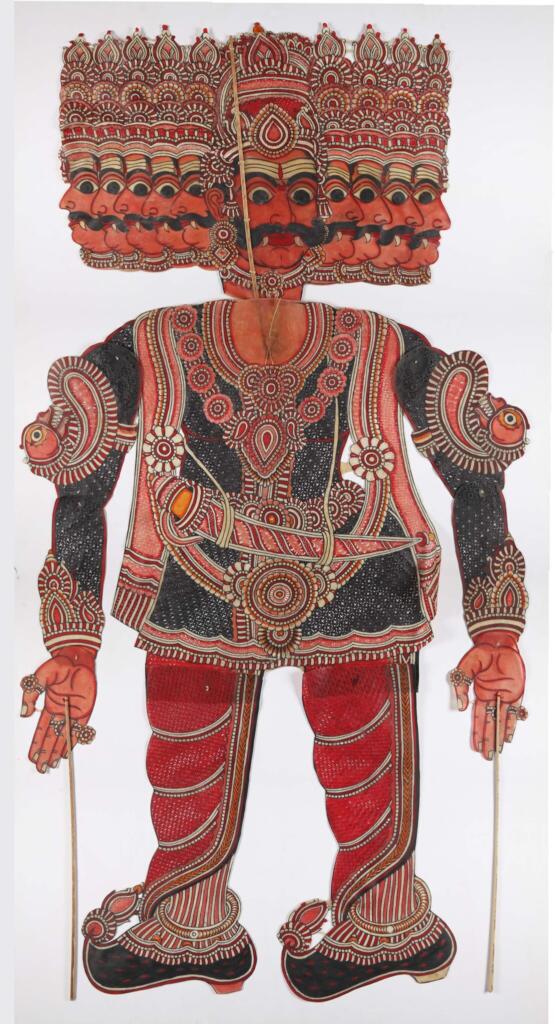 Today, as economic and cultural shifts take place, Tholu Bommalata is staying afloat by appealing to global interests or national programs for heritage preservation. National Award-winning puppeteer Sindhe Chithambara Rao, whose puppets fill the Sarmaya collection, says his troupe still receives a sizeable audience from villages, and government and cultural forums. However, his journey is fraught with difficulty. Villagers, while keen to watch the performance, do not contribute enough to generate income for 8-10 people.

Rao laments the state of the art itself and wishes, like many of his fellow artists, that the government would do more to save the art form itself instead of extending support to a select number of artists. A school or centre where shadow puppetry is taught and offered as a career option would go a long way towards saving it and making it sustainable. It would give contemporary artists the impetus to tell new stories to both educate and enthrall new generations and urban audiences who remain largely unaware of the art and its beguiling, arresting beauty