A National Award-winning puppeteer from Dharmavaram village in the Anantapur district of Andhra Pradesh, Sindhe Chithambara Rao is an artist par excellence. He is the director of the ‘Shadow Puppet Forum’ in the state, and he and his troupe are famous for vibrant performances in and around his village, in national cultural forums, as well as at international festivals and exhibitions. Sarmaya’s collections house many puppets from the artist, ranging from characters of both epics to modern characters like British officials. 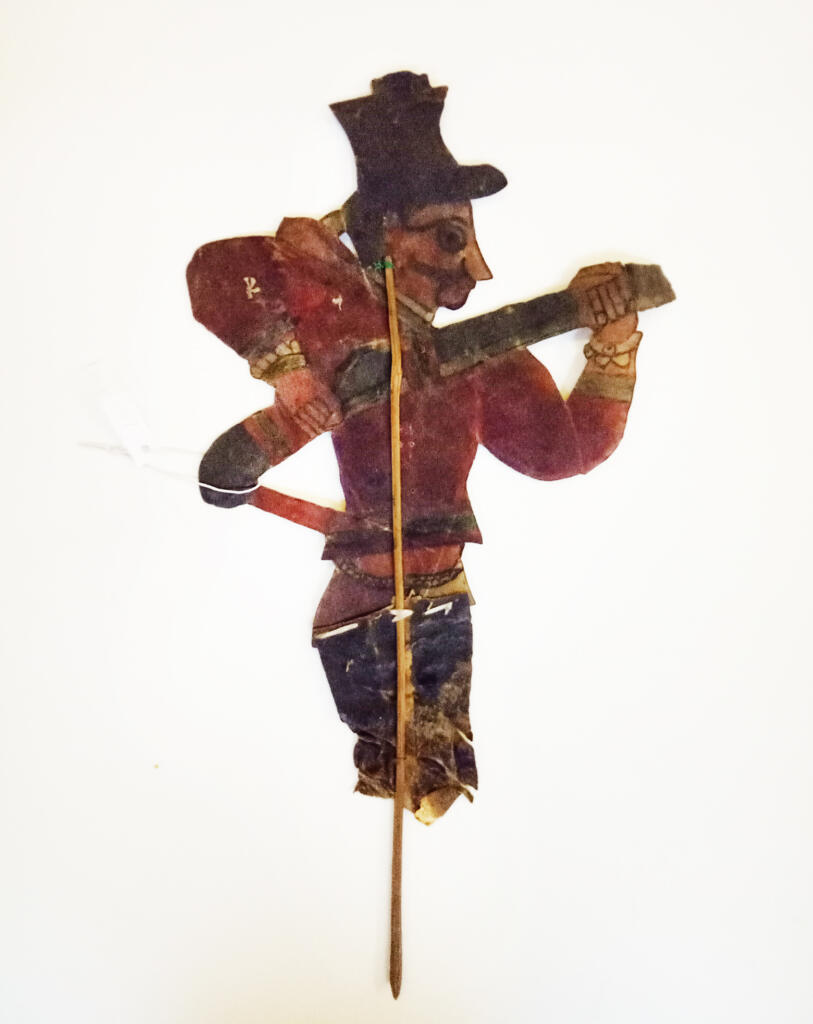 Chithambara Rao’s great-grandfather, Nayanappa Rao, was the first puppeteer in the family. He migrated from Solapur district in Maharashtra to Kolar district in Karnataka. Here he met with many leather puppeteers, forged friendships and learnt the art form. His son, Chinaveerappa Rao, moved to Dharmavarama and started practising the art in Anantapur district. From one generation to the next, Tholu Bommalaata was passed down to the hands of Chithambara Rao. 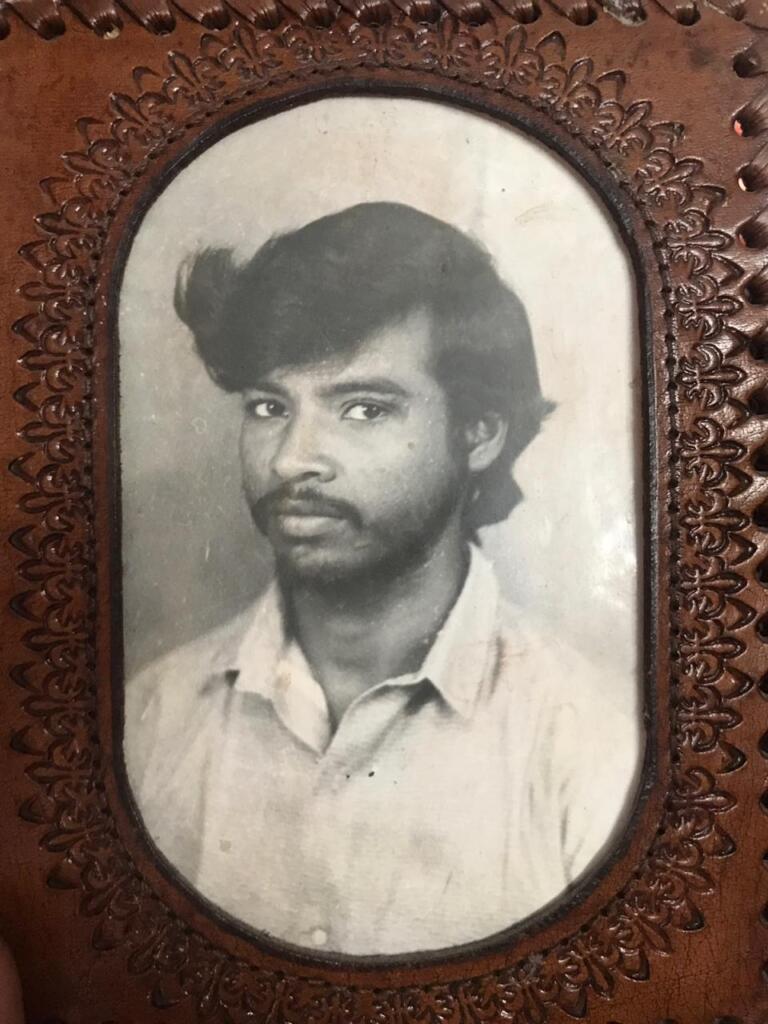 A young Chithambara Rao. Image from the Sindhe family album 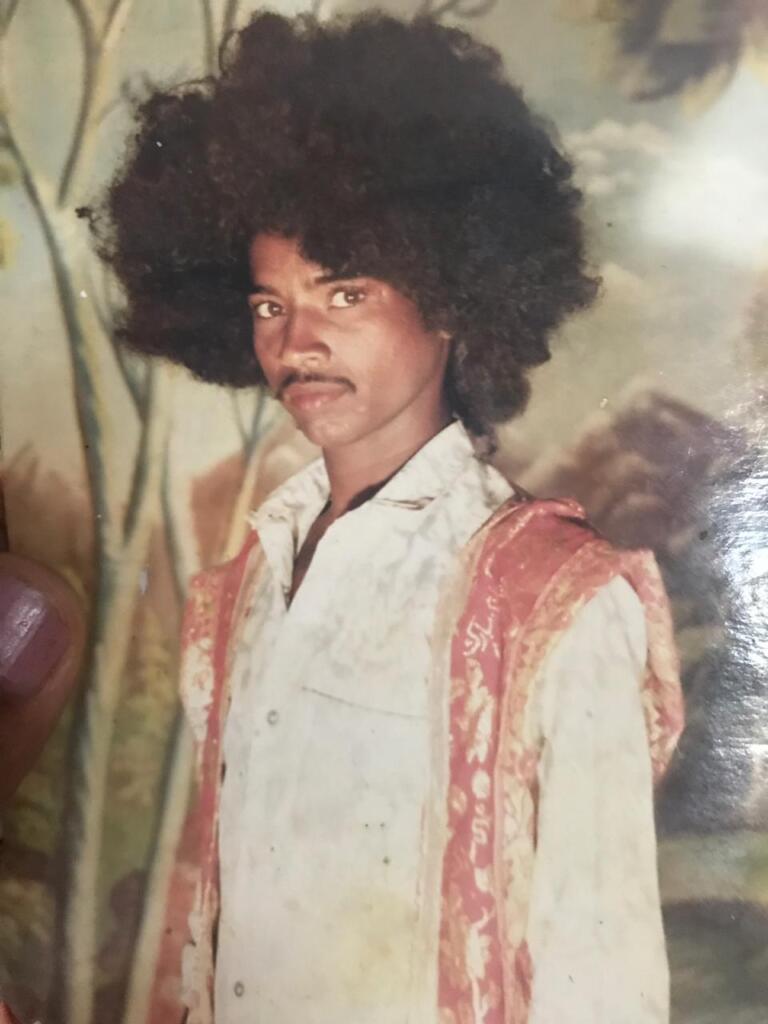 Young Chithambara Rao with a glorious head of hair! Image from the Sindhe family album

He now performs with his wife, two older brothers and three nephews. Their troupe is called Chaya Nataka Brundam, which literally translates to ‘Shadow Drama Troupe’, and has performed in many cultural spaces across Europe and Asia. Three of the men are puppeteers and the others are musicians and singers. Chithambara Rao himself is both a singer and a puppeteer.

Puppets created by Chithambara Rao and his wife Chinna Venkatamma are nothing short of breathtaking. They range from 3 to 7 feet in height. Iconic characters like Hanuman, Ganesha and Ravana are usually made in three colours primarily: red (or pink), black and white. They are decked heavily with flowers and jewellery, with even their skin having flower motifs punched on them. Striking designs like the stylised dhoti-pants of Hanuman, elongated headgear of kings and royals and soft faces of the female characters adorned with bright pink flowers catch the eye immediately. 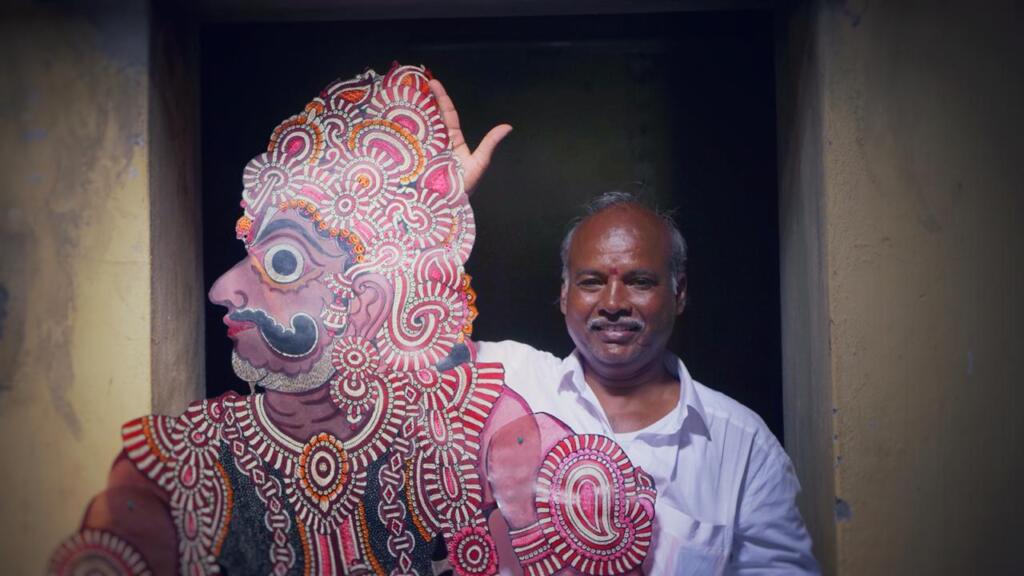 The detail and finesse in each puppet is a testament to the Sindhes’ unparalleled skill. Here, Chithambara Rao tells us about his journey as a Tholu Bommalaata artist and his deep love for the art form.

Tell us about your background and how it ties in with the history of Tholu Bommalaata.

“My ancestors were from Maharashtra. They migrated to Andhra Pradesh, Karnataka, Tamil Nadu, Kerala and Odisha. This was over 2,000 years ago. Everyone chose different professions to pursue. Some of them became daily wage workers. But many of these families didn’t know what to do. Some great man advised my ancestors to perform plays in the villages to earn a living. They followed his advice and that’s how it all began.”

“Initially, it was just basic storytelling without songs. They thought it best to narrate. They asked the Brahmins for advice about which topics would attract the public, and were advised to talk about the Ramayana. They felt that God would also bless us.”

“In the past, they used deer skins to make the puppets. But during my father’s time, deer skin was banned, so he started using goat skin. My parents had five sons and two daughters, including me. I am the youngest. All of us used to go to the village to perform plays, that is how we earned a living.”

How was your interest in Tholu Bommalaata born?

“I’ve been interested in Tholu Bommalaata since I was 8 years old. I used to watch my father, my older sister and brother synchronise the puppets to the tunes of their storytelling. Since I loved puppetry, my father began to train me. He would ask me play the puppets all night. The puppets used to weigh a lot, at least 3-5 kilos each. Since I was really young, it was hard for me. But that’s how I learnt the art.”

“After I lost my parents in 1992, I used to play the puppets but never knew the stories. I didn’t know how to make a living for myself. At that point, even getting food was difficult. I didn’t even have a spare set of clothes. I used to borrow clothes from the village every day. That’s how I would survive. Then my four brothers, my sister and I formed a group. We worked together for over 10 years.” 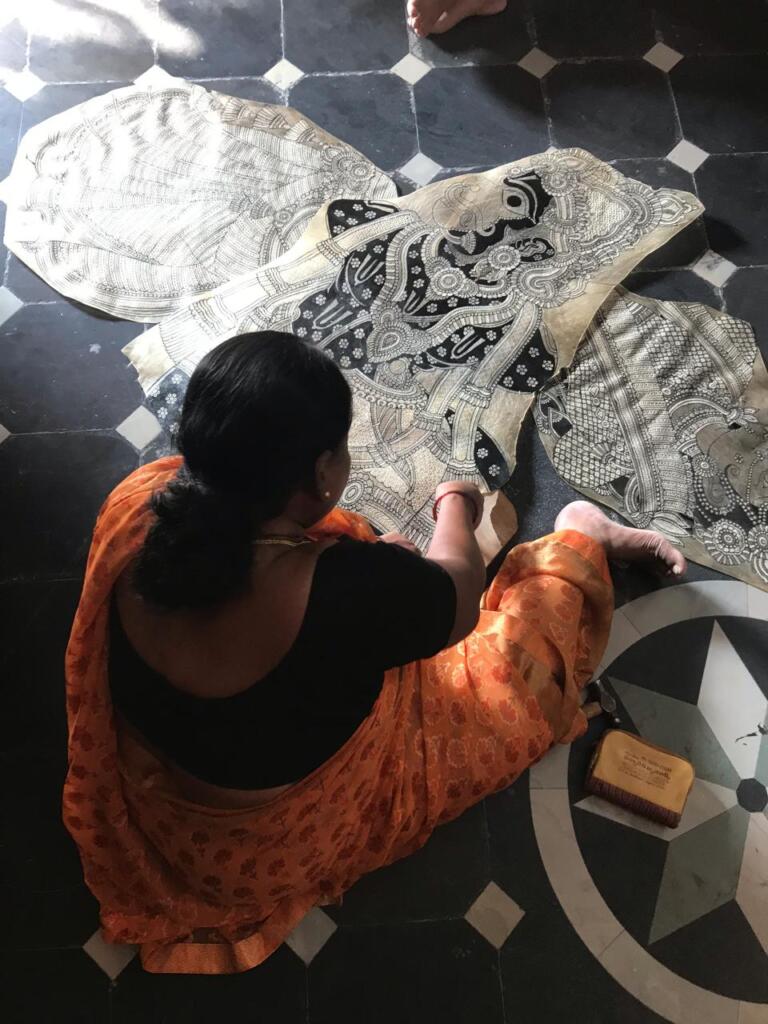 How do you and your family practise this art? Who plays what role?

“My wife and I work together to make the puppets; from pressing the goat skin to removing the hair, my wife is always with me during the entire process. We fix the skin to the frame of a bed and leave it in the sun for two days till it becomes transparent, like glass. Then we sketch the characters of the story on it with chalk, and reinforce the drawing with a needle. We polish it using a sharp blade, make a pen from the stem of a bamboo plant and make black marks where the design has to be drawn. After that my wife cuts out the design of leather. She is far more talented and hardworking than me in every aspect.”

Where do find inspiration?

“There is inspiration all around us. There’s a saying that ‘An artist’s imagination reaches places where even the sun’s rays don’t reach’. It’s true for people like me who make handcrafted objects, it’s like making a song — deciding the tune and the raag that suits the song best. That’s how we form our ideas as well.” 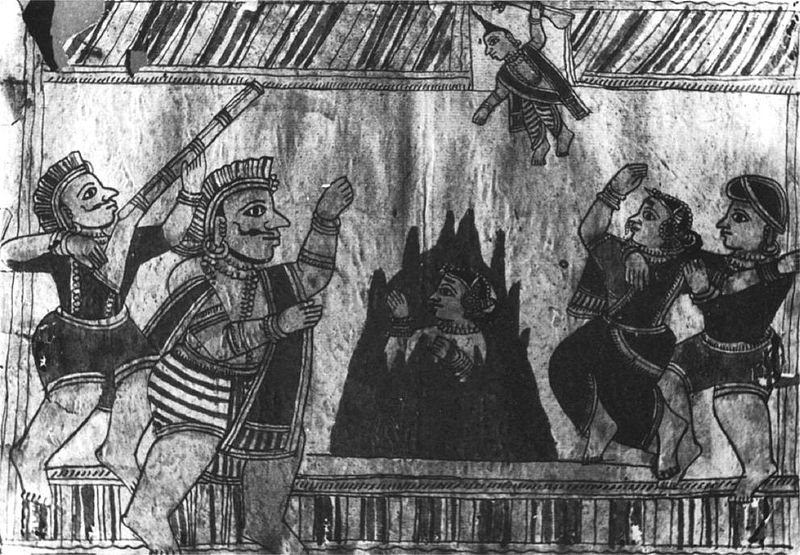 Painting from Pinguli village, Sawantwadi, Maharashtra, 19th Century. Image from Wikipedia Creative Commons—click on the image to visit the page

Can you give us an example?

“There are some old temples, statues and pictures that serve as inspiration, an ancient art known as the Pinguli style. I go to the old temples to observe the movements, the lips of the sculptures, the eyes, the distinctive ears, the unique poses of Ram, Hanuman, Ravan, Kumbhakaran, Indrajit, and the distinctive features of the Pandavas. Eighty percent of our ideas are derived from here.”

“I don’t take photos. I see the image, register it in my mind and store it in my memory. I come home and start drawing a few times. If I get a few details wrong, I don’t even feel like sitting near the puppet, it’s upsetting. But when I get it right, there’s no greater happiness. Tholu Bommalaata has a distinctive style — the eyes or lips, the way of holding weapons like a sword or mace, the style of holding a bow and arrow. You cannot change these, as that would dilute its authenticity.”

How have you modified the art form to make it more compelling to today’s audiences?

“The major attraction is now comedy, that really engages them. Narrating the Ramayana is not enough anymore. They ask for a joke or two. We also try and showcase social issues like mobile addiction, wastage of water, domestic violence, family planning etc.” 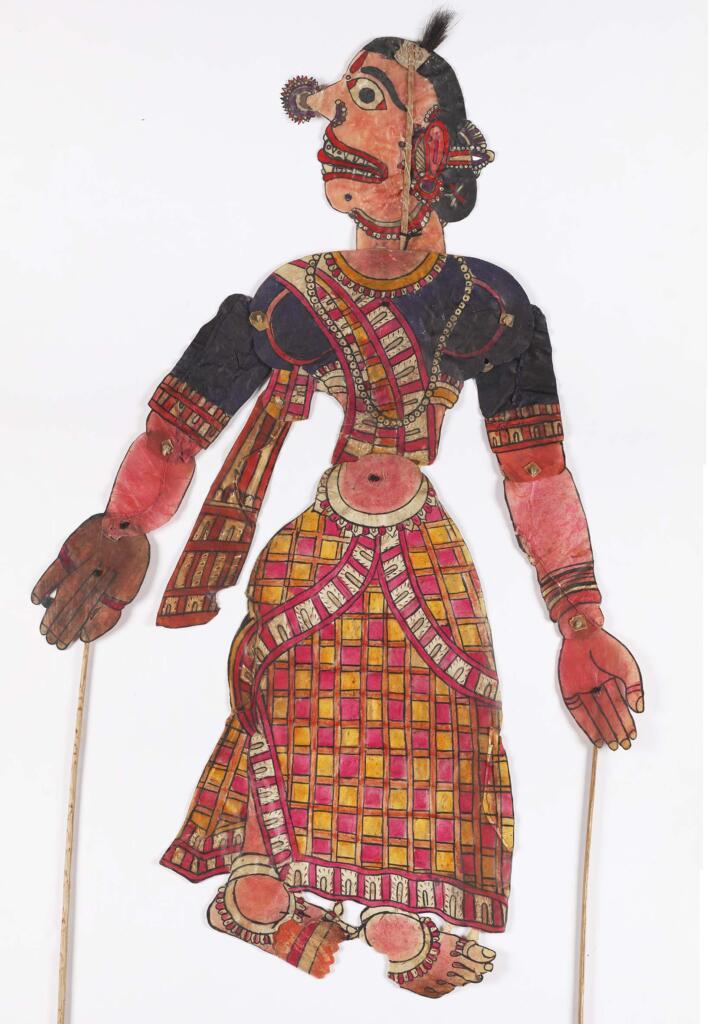 Can you tell us about the concept of ‘pandita haasyam’?

“For comedy, we have characters called Bangaarakka, Jutupoligaadu, Khetigaadu and Alaatapaagaadu. As soon as these characters come on to the stage, the kids start laughing uncontrollably. The kids come to watch just for these characters. Kids love jewellery, and the characters are created accordingly. We try to convert the humour into something useful for kids—it’s what’s known as pandita haasyam. It’s not crass humor, it carries a message.” 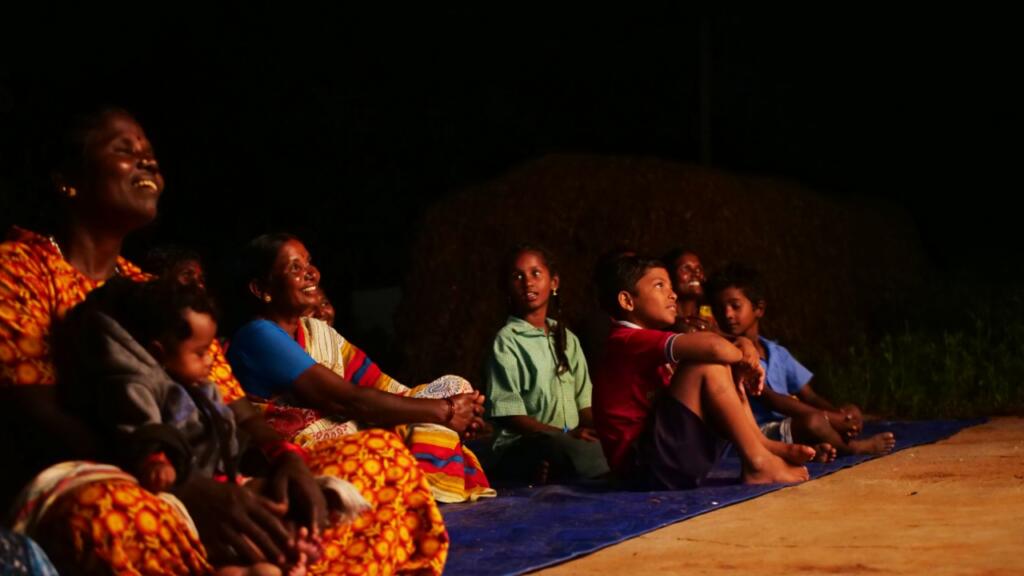 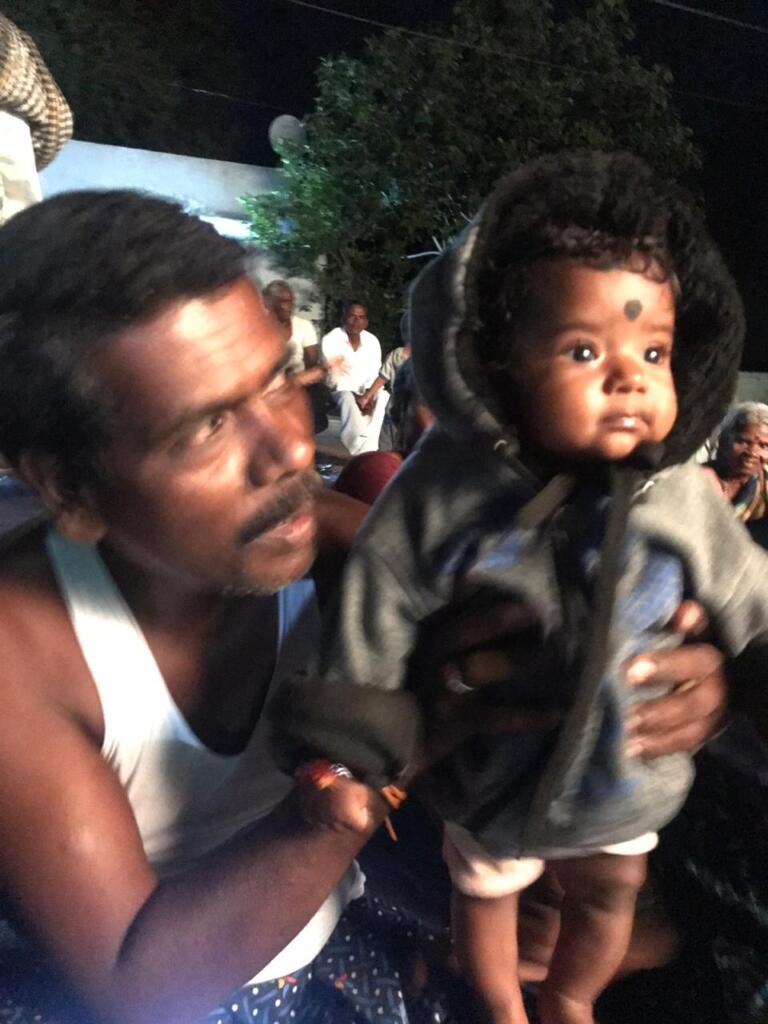 A baby at a Tholu Bommalaata performance by Chaya Nataka Brundam. Image by Storyloom Films

How many shows do you do and how do you advertise them?

“It all depends on luck. I do about 15 programmes in a year. I conduct programmes on Mahashivratri, Ganesh Chaturti and Ugadi. In the villages, during Ganesh Chaturthi, they seat the god for 4-5 days. At that time, we talk about the Ramayana. As we attract the audience towards our material and plays, we start getting offers from other places as well. Sometimes the state government asks us to perform in a places like government office quarters. When they like our material, we get more programmes.”

Is that how you got the opportunity for Swachh Bharat Abhiyan?

“Yes. For Swachh Bharat, we made around 35 puppets to talk about the subject. We made characters who were Muslim, Hindu and Christian, to showcase how everyone comes together for this cause. We’ve also addressed preservation of the environment, not cutting trees, using natural fertilizers (cow dung) instead of chemical fertilizers, using organic food instead of food grown with pesticides and chemicals, eating other grains like bajra, jowar etc.”

What is the future of Tholu Bommalaata?

“During my parents’ time, in Andhra Pradesh, there were over 180 groups in 13 districts. Now there are not even nine groups. We don’t have an audience anymore. As a result, our groups have started pursuing other professions. We are trying our best to make sure this art doesn’t disappear into oblivion. But we need support to keep this going. If this art is developed, many families will be benefitted. We need help from the government or private organisations to strengthen this art.”