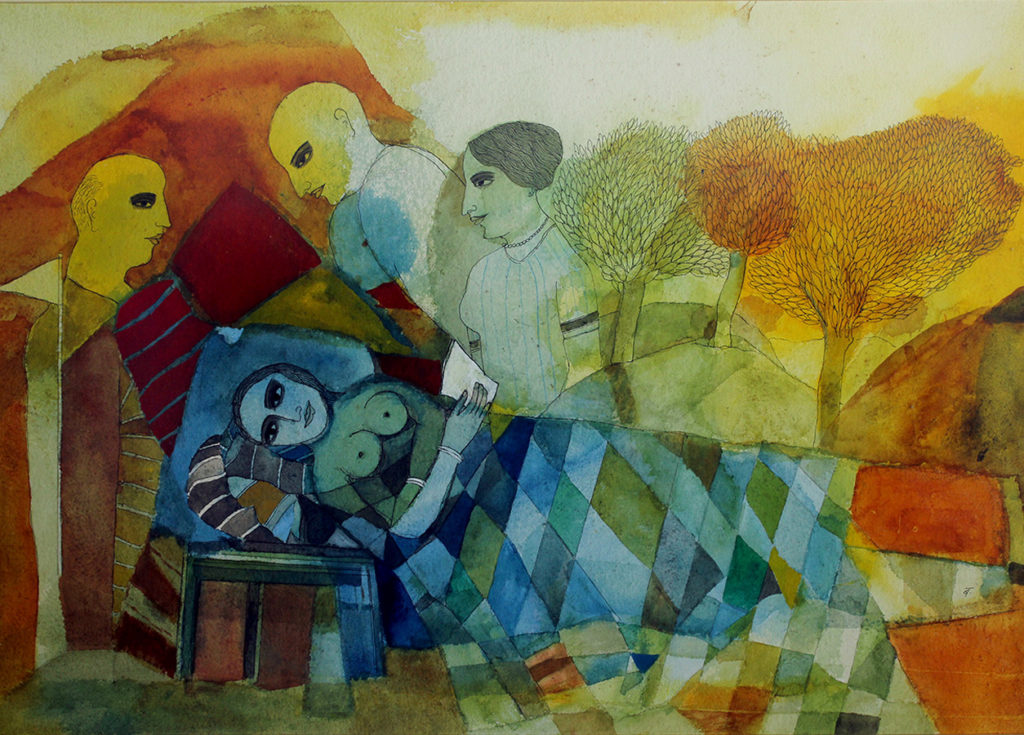 ‘Letter of Dream’ by Badri Narayan from the Sarmaya collection

Badri Narayan made his debut as a painter fairly young. When he was 19, his work was included in the All India Art Exhibition organised by the Hyderabad Art Society in 1949. He made art prodigiously since then, showing at galleries around India and the world and winning honours like the Padma Shri in 1987. Badri passed away in 2013, but he painted almost till the end. That’s over 60 years of honing a craft for which he already had a precocious gift. The Sarmaya collection has works created at various points in his career—from the early paintings on ceramics to the more spiritual explorations of the later years—and examining these works, a few key characteristics seem to stand out. Certain techniques and aesthetic preferences shaped his evolution as an artist. While he worked in different mediums, he was drawn most strongly to the fluidity afforded by watercolours. His influences ranged from temple murals to Byzantine art, but Kalighat paintings held a special fascination for him. And throughout his life, he was enchanted by the colourful, expressive and passionate world of Indian miniatures.

So if you want to know if the painting before you is a Badri, just look out for these classic giveaways. 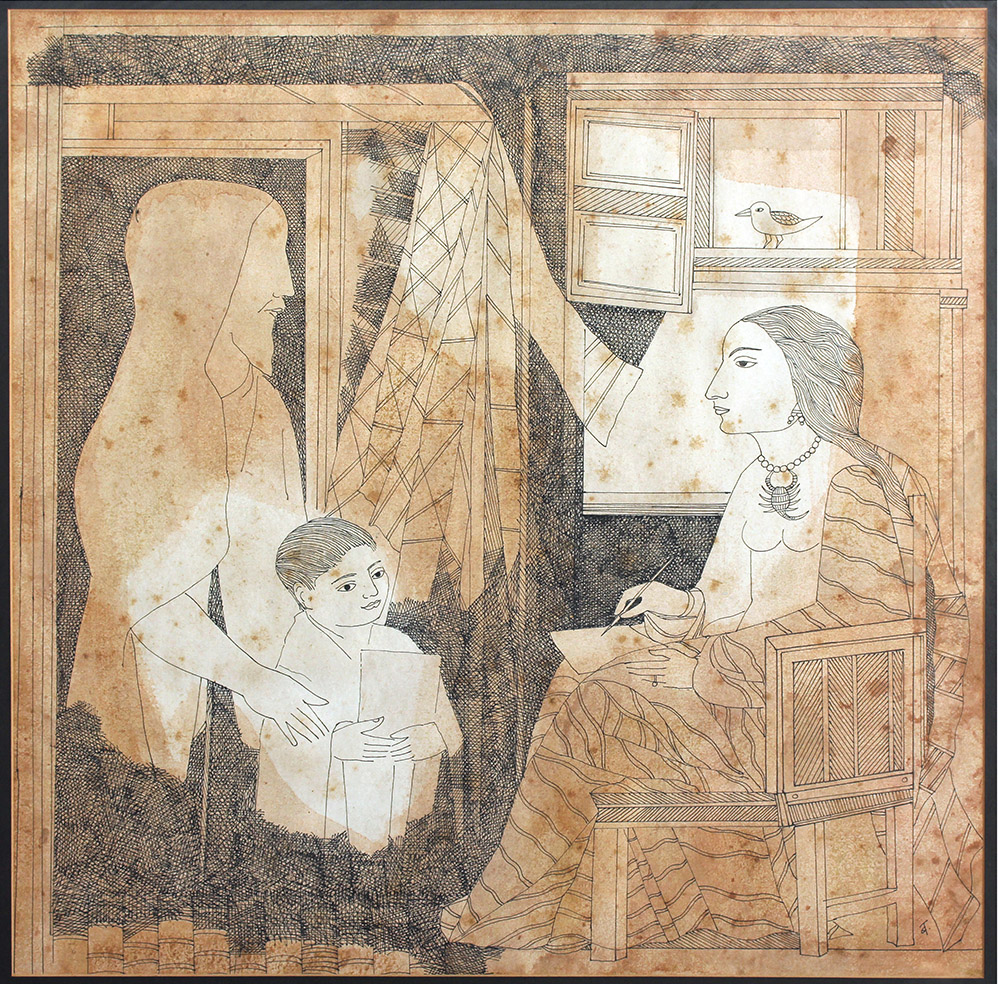 Untitled by Badri Narayan from the Sarmaya collection

Artists use the technique of hatching to add texture and atmosphere to their work. It involves the drawing of fine parallel lines to create tonal or shadow-like effects. Many Badri paintings feature it in some form or the other. The lines are sometimes straight and parallel as in the window frames in the painting above, sometimes curvy as in the woman’s hair and sometimes at right angles to each other, creating a cross-hatch effect as you see on the wall. This cross-hatch extends to make it look like the wall is merging with the shadows in the room—the little boy emerging from the darkness looks almost radiant in contrast. 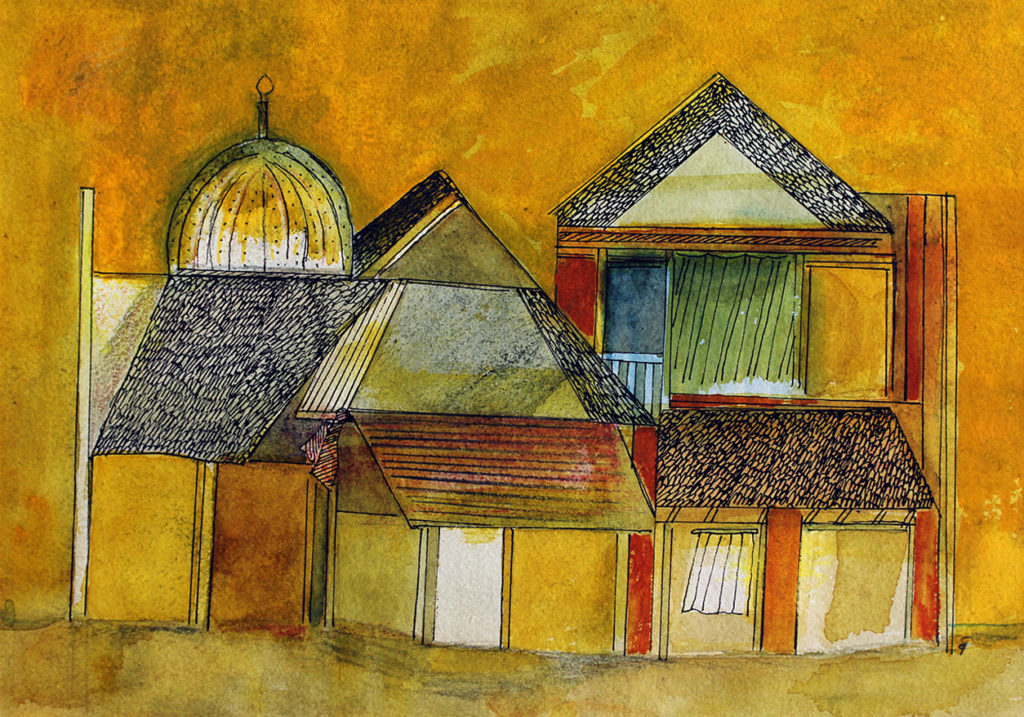 ‘Houses’ by Badri Narayan from the Sarmaya collection

Badri embraces the two-dimensional nature of the medium and even leans into it, creating what art critic Sumitra Srinivasan described in an exhibition note for the art gallery Pundole’s as a “serene flatness… in consonance with the lack of defined perspectives of Indian miniatures.” Both background and foreground are given the same visual treatment, giving the impression that these lovely washes of colour are being held in place only by the artist’s will embodied in those dark lines. 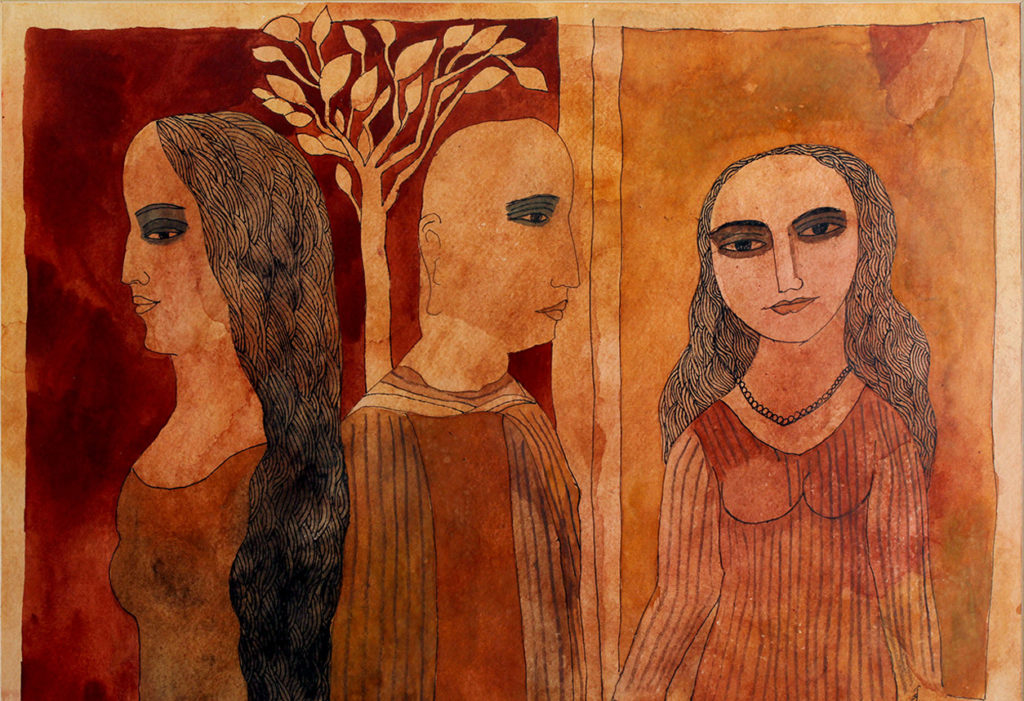 Untitled by Badri Narayan from the Sarmaya collection

As critics have observed, Badri was very influenced by the tradition of Indian miniature paintings—not just their outward form, but the sentiments behind the aesthetic choices. As he himself explained in an exhibition note, again from Pundole’s: “Colour, in the composition of the Indian miniatures, is used emotively. The aesthetic base of the miniature schools was built on the deeply felt emotion or sentiment, rasa; upon the psychological qualities of the line, colour and manner of colouring, sinuous contours and visual rhythms present in the total pictorial organization. Again, importantly, the aesthetic order of the miniatures is not dependent on physical size or dimensions to attain the feeling of the monumental.” 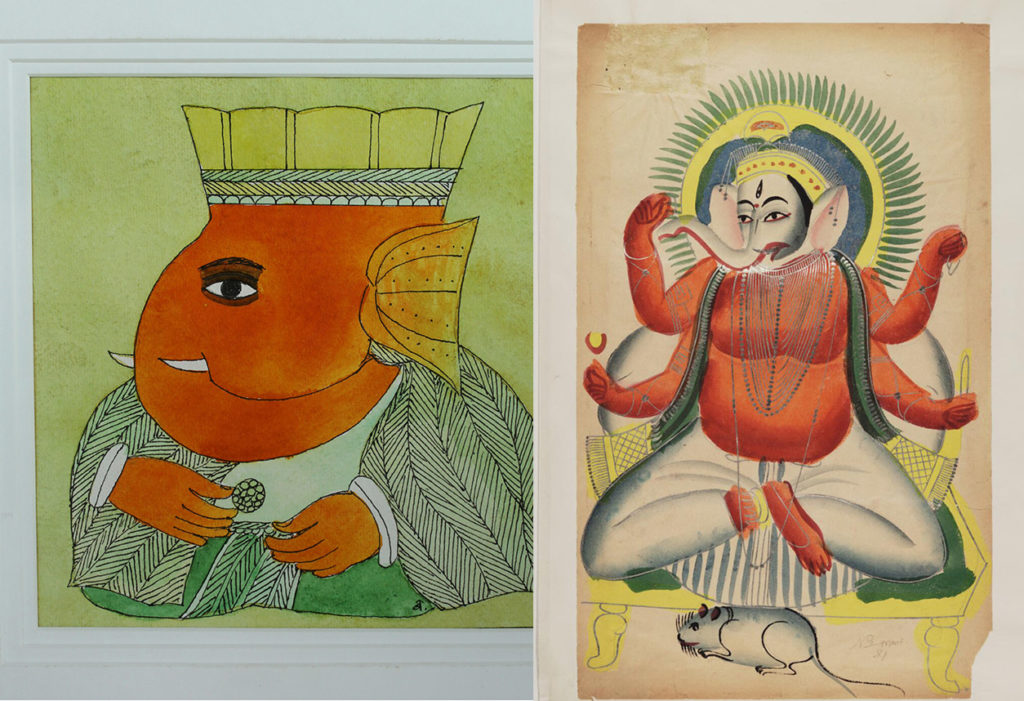 Like many of his contemporaries, who came of age at the same time as independent India was being born, Badri too believed there was enough in the subcontinent’s traditions for any ambitious artist to draw from. As he put it in an interview with the Illustrated Weekly of India, “…as a modern painter, I find that in the Indian tradition I am heir to (especially in its less-refined phases) the accrual of an aesthetic experience which finds self-awareness in such minds as can partake of the glory of Godhood.” As with Jamini Roy, Badri too sought inspiration from the 19th-century tradition of Kalighat paintings, which were an amalgam of devotional Indian art sensibilities and the more continental tastes of their British patrons. So although he respected European masters like Cezanne and Mondrian, Badri confessed a partiality for Matisse—“if only for the reason that his lines, colours and forms arc surprisingly similar to the folk-painting of the Kalighat school.” 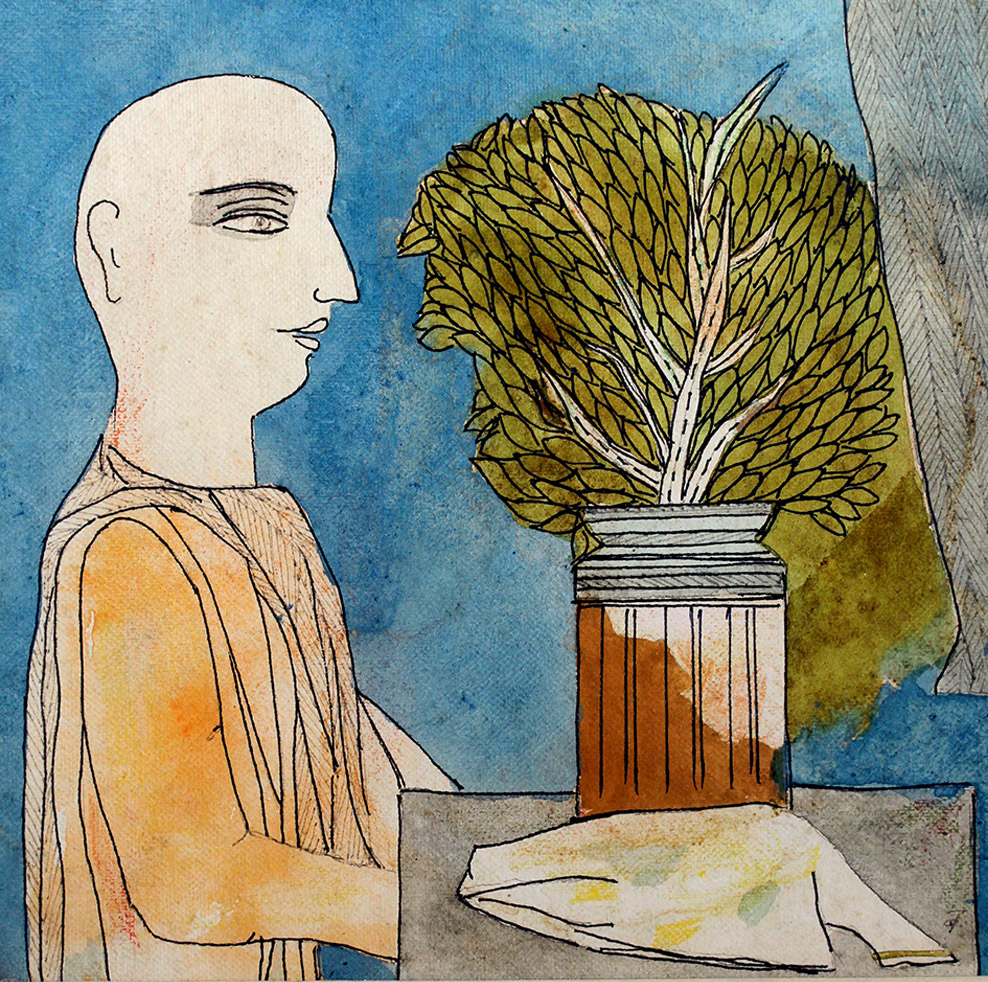 ‘Meditating on the plant’ by Badri Narayan from the Sarmaya collection

According to this article in The Hindu, Badri gave up working with oil paints because his daughter developed an allergy to them. Watercolours became his medium of choice. “I like the medium which I can handle with softness or fluidity like watercolour on paper. The art of painting is such that every line and colour expresses a statement.” Over the fluid waves of colour, Badri imposes order with ink. As Srinivasan notes in the same exhibition note from 1996: “The wonderfully flowing drapery with colour washes staining one another is held in control and enhanced as all Badri’s figuration is, by ink lines, which he adds later. These rekha-lines gives Badri’s imagery a definition and constitute a personalised signature of his visual vocabulary.”