Nelson Mandela once famously said, “The greatest glory in living lies not in never falling, but in rising every time we fall.” This rings particularly true to the revolt of the Indian sepoys against British rule in the summer of 1857. Even though the Uprising did not ultimately result in favour of the Indians, it gave the British and other foreign officials residing in the subcontinent at the time a tough confrontation, and put focus on the need for the nation to revere and preserve its dharma and its deen. 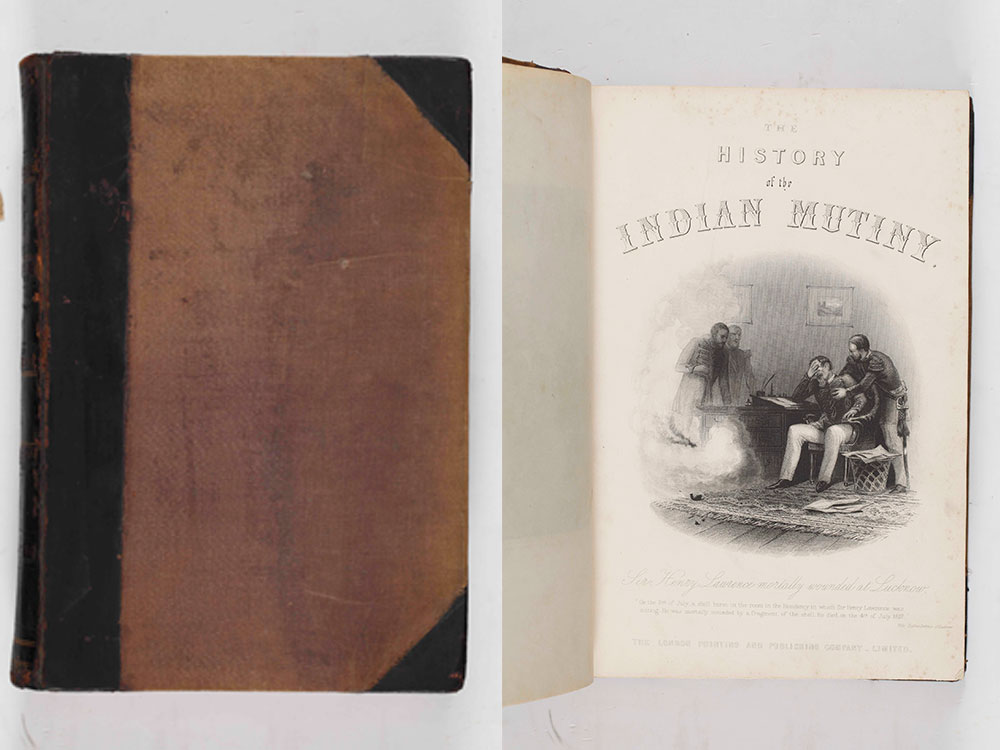 British accounts of the Uprising of 1857 refer to Indians as ‘barbaric deviants’, ‘the enemy’ and ‘pollutants’ who could never level up to the unmatched power of British rule. Charles Ball’s book titled The History of the Indian Mutiny, Volume I, c. 1875, illustrates some wholly fictitious and highly dramatic scenes, particularly with regards to the efforts of the British officials at Kanpur (anglicised as Cawnpore) and other North Indian cantonments against the “imperfect and easily suppressible Indians.” According to Ball, the “Indians [were] threatened by the power and prestige of the English flag,” and therefore failed to put up a challenging fight. A more accurate title for Ball’s book might be The Indian Mutiny and the Great British Imagination. 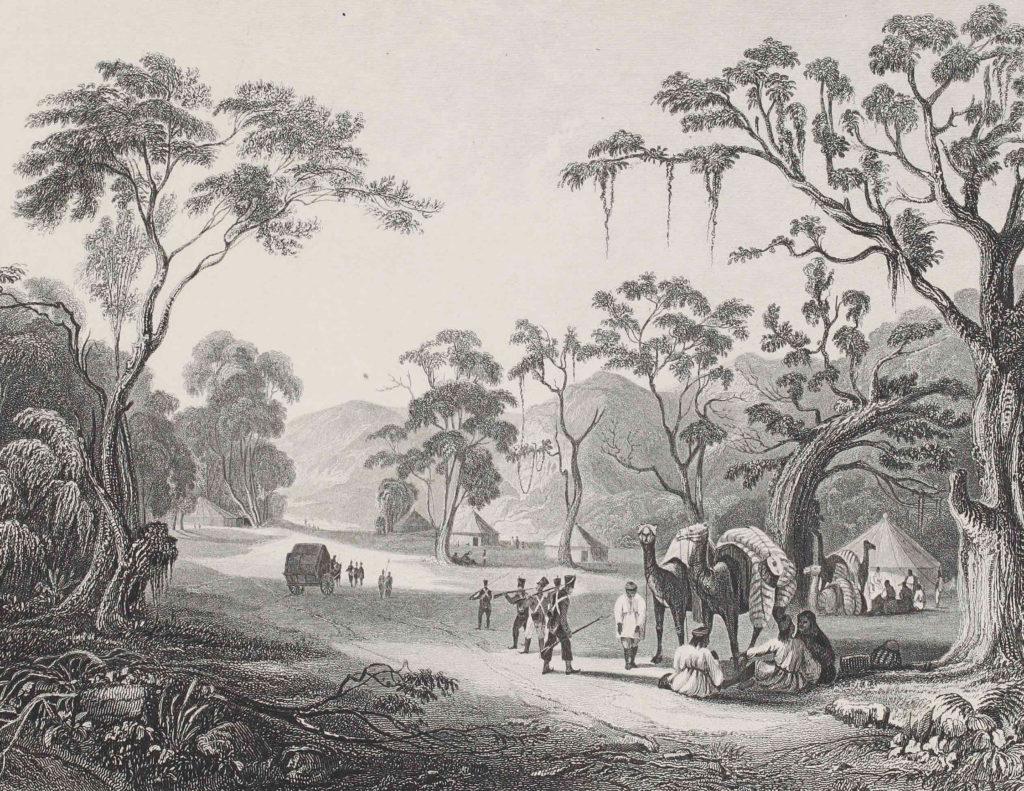 ‘Troops Encamped at the Entrance to the Keree Pass, North of Meerut (about 50 miles from Delhi)’ from Charles Ball’s book

Ball goes on to derogatorily pass commentary on the people of India in Volume II of the book, stating, “even though Indians populate India, they fail to improve it,” as though British rule had no part in ravaging India’s untainted wealth and resources. This evaluation of the Indian subcontinent and its people seems personally and vindictively directed by Ball in his writings. He consistently describes Indian sepoys as “powerless” against the British, which is objectively incorrect, as the events of 1857 almost resulted in the decline of British Governance. 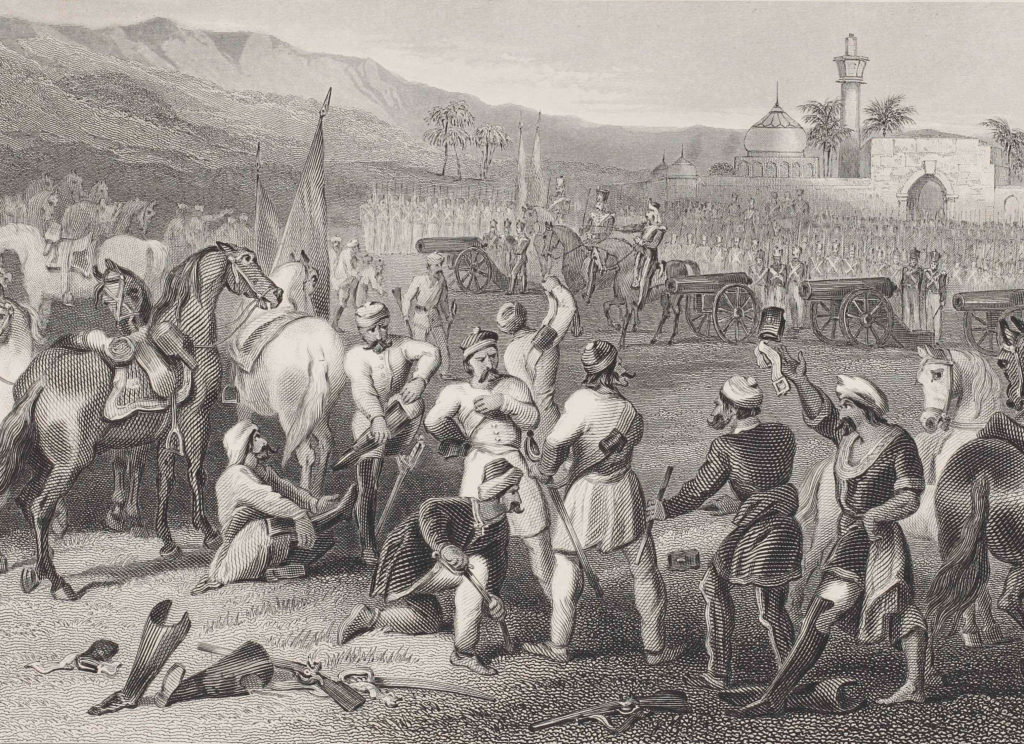 Attached to the events of 1857 were a number of rumours and wide conjecture that generated a lot of controversy. Some of these speculations included spreading secret messages through chapatis, cartridges greased with animal fat, mixing animal bone dust with flour and numerous other antics used by the British to dishonour Indian sepoys’ faith. Several of these tales were believed to be the initial sparks that ignited the fury that led to the uprising. In 1857 India, caste meant a great deal — it was people’s inherent identity, which the British were intent on destroying. And so “caste [was] intimately connected with the rising of the mutiny” [1857: The History of an Uprising by Rudrangshu Mukherjee]. 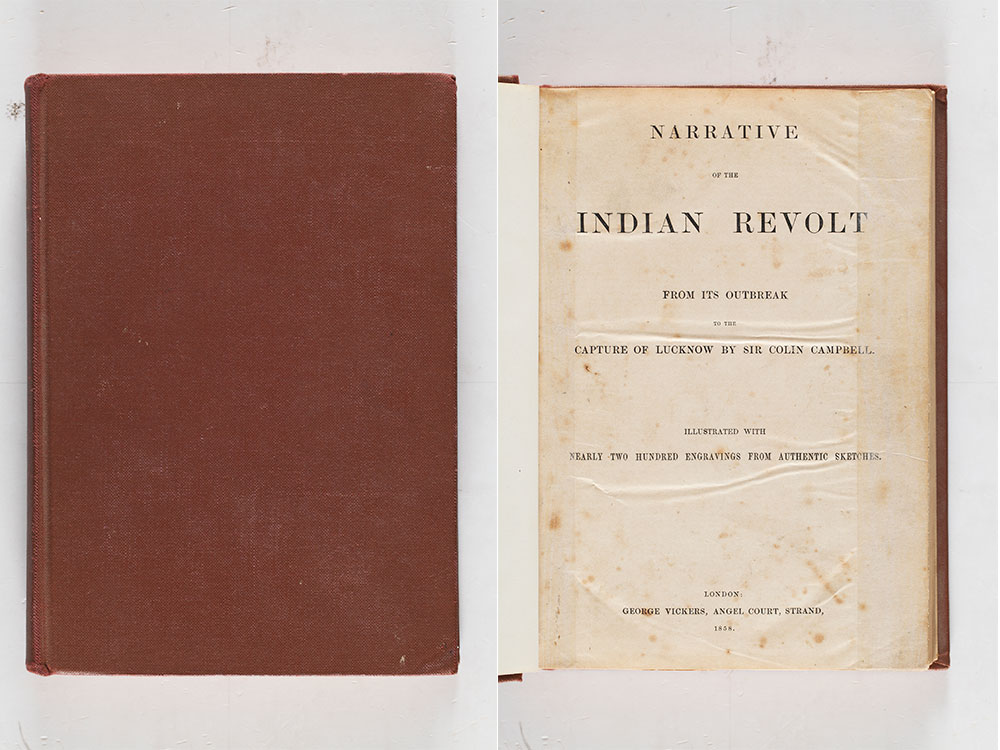 Cover of ‘Narrative of the Indian Revolt from its outbreak to the capture of Lucknow’, c.1858 by sir Colin Campbell

Sir Colin Campbell’s book, Narrative of the Indian Revolt from its outbreak to the capture of Lucknow, c.1858, was also very much in favour of the British. Campbell states that the British never meant to compromise the sensitivities of Indians towards their own religious beliefs, and that “there seems to be little doubt that offence has been given in terms of caste to the [Indian] troops.” Contrary to this opinion, Indians felt ill-treated by the British who thoroughly demeaned everything about them — from physical appearance to faith. Ball, Campbell and other British historians believe that it was just a “matter of the cartridges and the introduction to the conversion to Christianity that prompted the revolt of the Indian sepoys against their rulers,” while in truth it was a build-up of a series of atrocities committed by the British against the Indians that actually caused it. 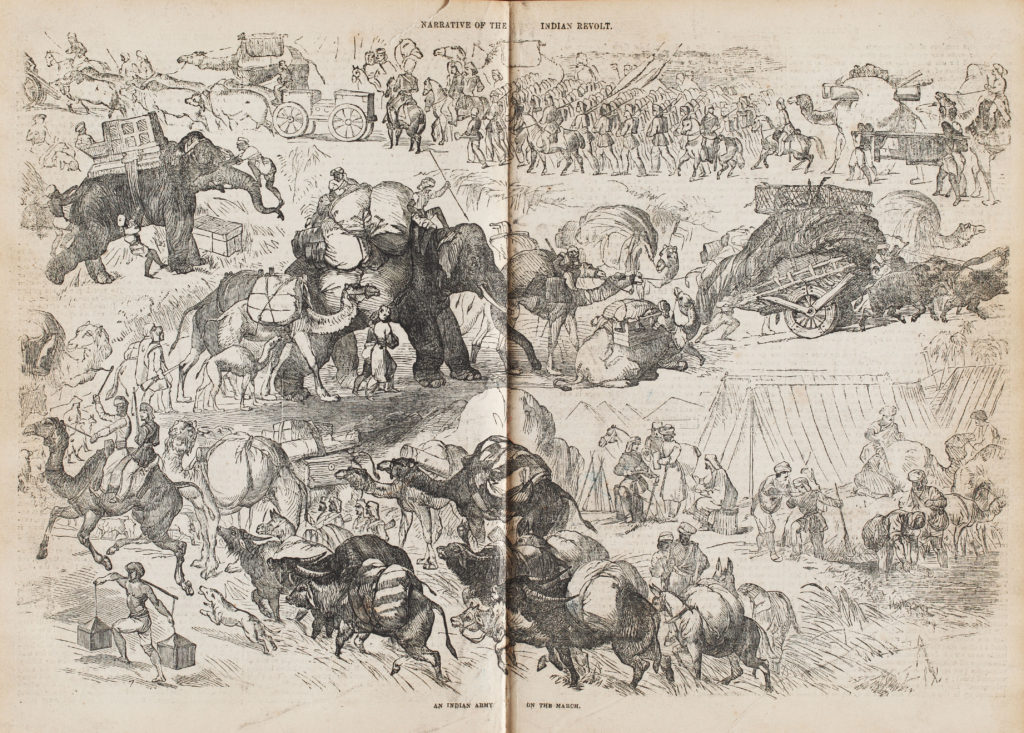 ‘An Indian Army on the March’ from Colin Campbell’s book

While Campbell defends the British in their knowledge of “how tenacious is the sepoy of his caste, and how suspicious he is of anything that is likely to affect his religion,” he belittles Indians by mocking “the absurdity of their fears that they entertained for their religion.” Ball too, in his writings, addresses the sharing of lothas among different castes, saying that “the pride of the caste would be brought low, as the sharing of lothas would cause disruption and contamination.” While it is true that the caste system was (and remains) archaic and suppressive, it is still ironic that it was criticized by the British when they were in fact India’s biggest oppressors at the time. 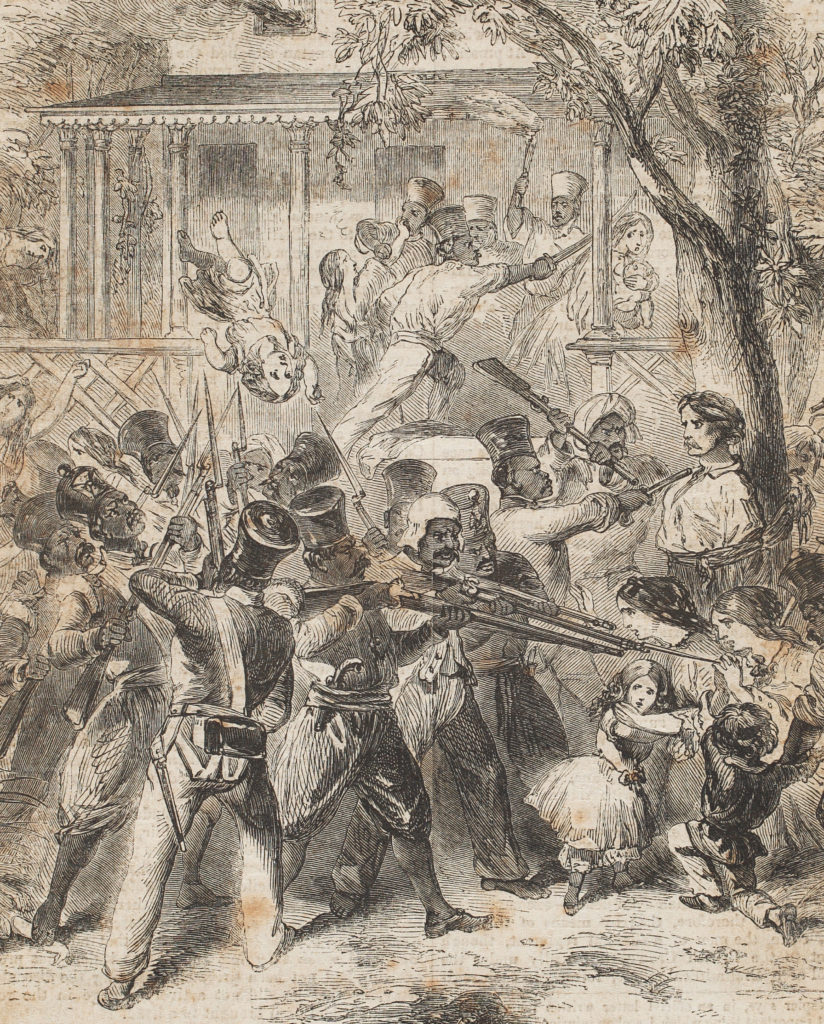 ‘The Massacre at Delhi’ from Colin Campbell’s book

Ball and Campbell staunchly continue to defend the British and their understanding of the Indian belief system. Ball states, “the local officials even sent out an appeal regarding [the animal fat greased cartridges] to the highest authorities in England, which resulted in the cartridges to be made and greased locally, using anything other than animal fat so as not to hurt the sentiments of the Indian sepoys.” This tale may cast the British in a sympathetic light, but is far from the truth.

The British made it a point to segregate the cantonments of the British soldiers from those of Indian soldiers. Indian soldiers were subjected to harsher conditions and not given the same rights or privileges as their British counterparts. They also forced their own beliefs upon the Indians, instead of allowing them to follow their own religious views. Several Christian missionaries were brought to the subcontinent to open schools and churches to convert Hindus and Muslims so that they would align with Western sensibilities. 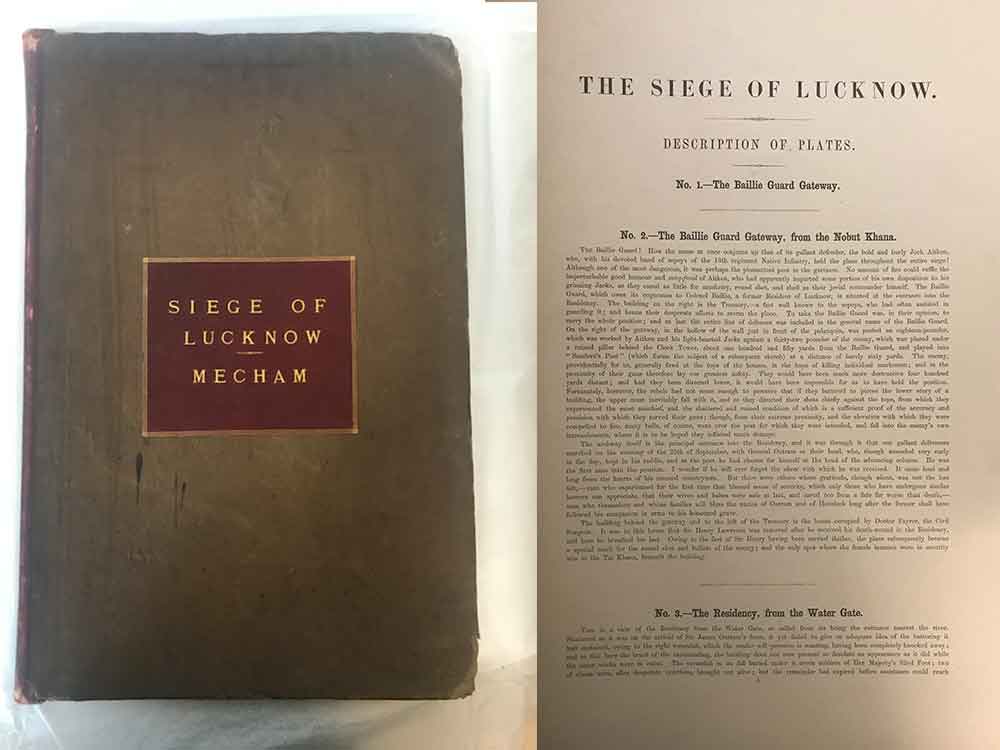 ‘Sketches and Incidents of the Siege of Lucknow’, Clifford Henry Mecham 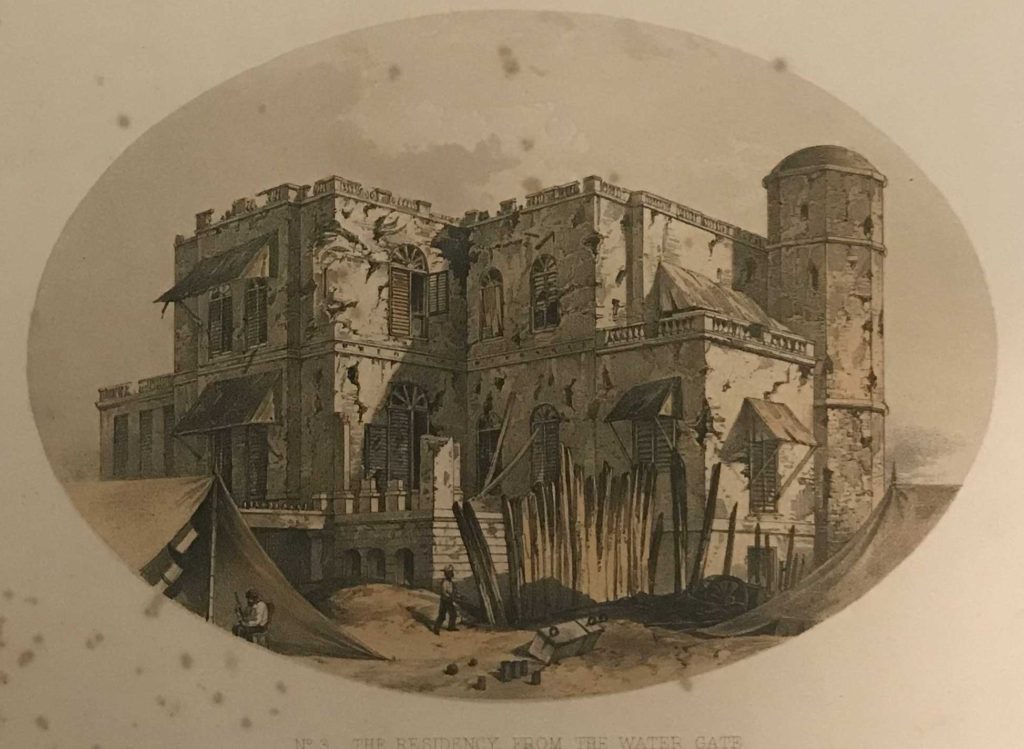 ‘British Residency from the Water Gate’ 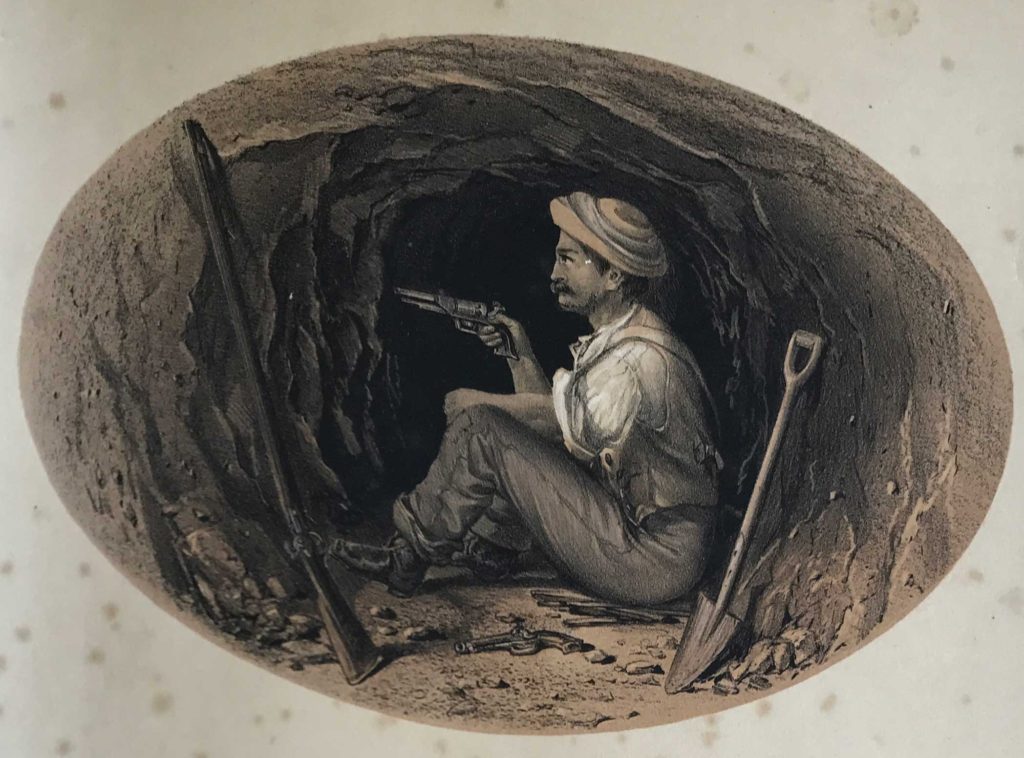 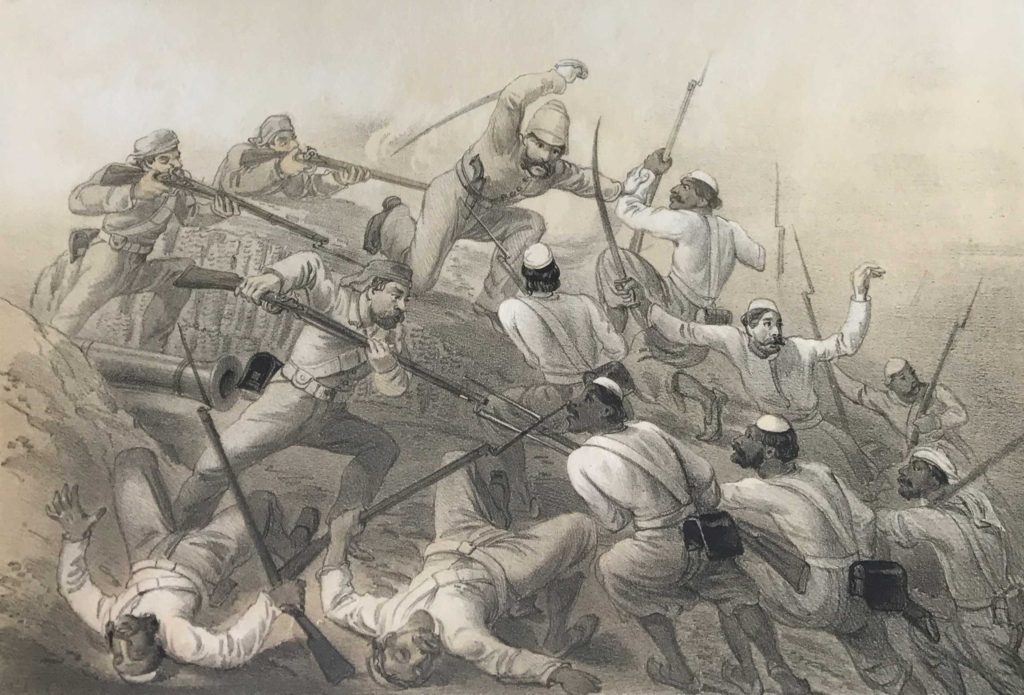 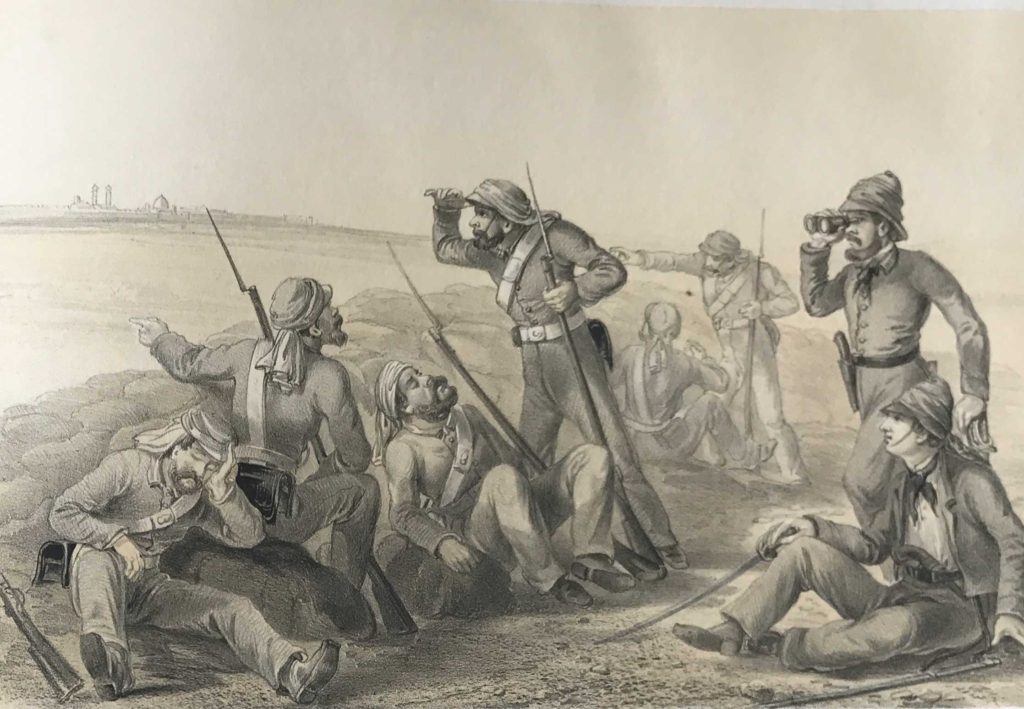 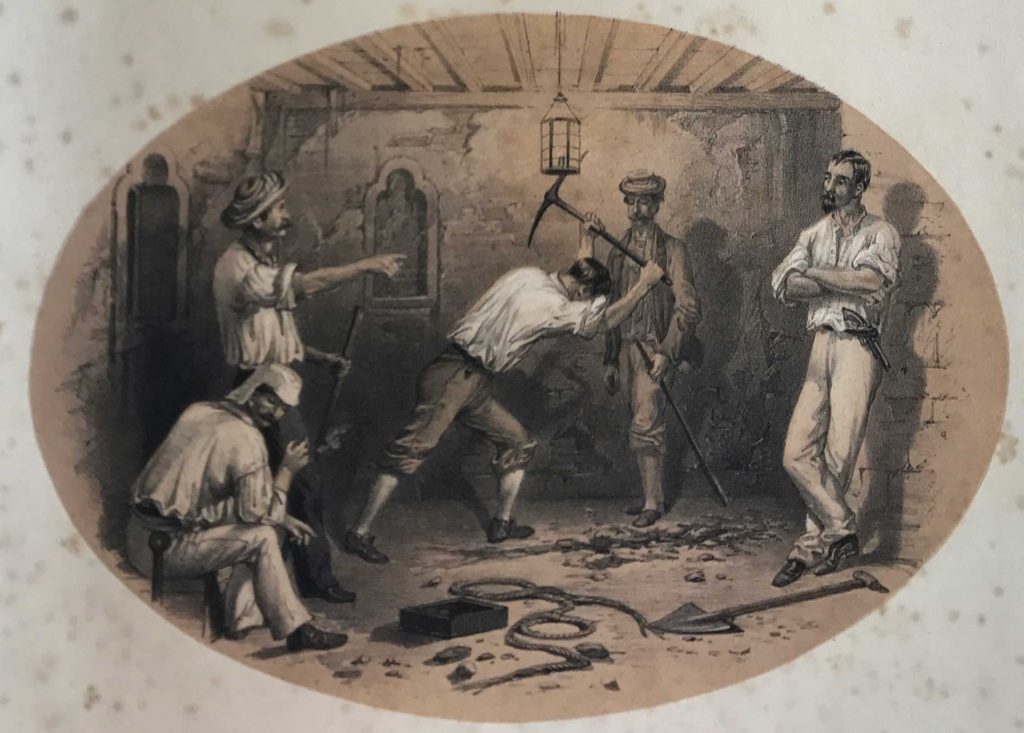 In Sketches and Incidents of the Siege of Lucknow, Clifford Henry Mecham, lieutenant of the Madras Army c. 1857, goes to the extent of victimizing the British. He believes that the Indians betrayed the British thorough “the treacheries and atrocities practiced against those to whom they were bound by every tie of honour and morality to be faithful.” He also writes wholly imagined stories: “No man or woman can be misled as to the feeling in Great Britain who has read of the unspeakable atrocities committed on our betrayed countrymen, and their women and children – of these latter being factiously tossed in the air and caught upon bayonets – of their flesh being cut from their bodies and forced into the mouths of their parents. A daughter made to drink her father’s blood – of English mothers and wives driven naked through the streets, and then given up to the wretches hounding after them.” 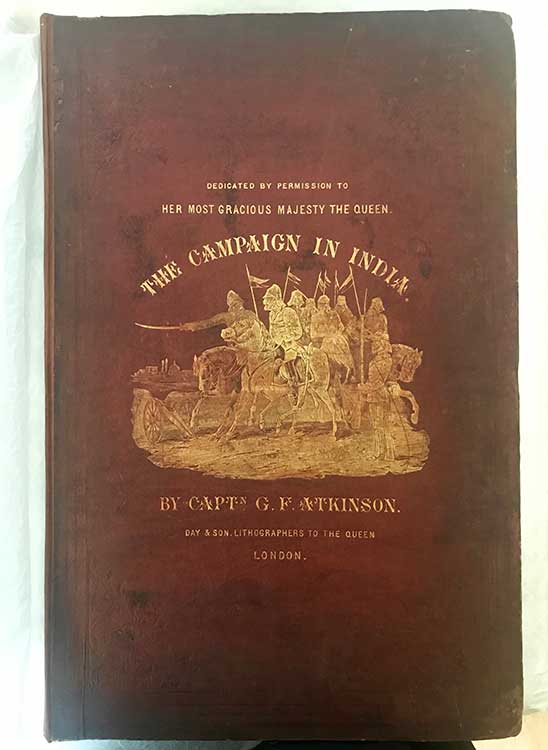 Cover of ‘The Campaign in India’, c. 1859 by Captain GF Atkinson

In The Campaign in India, c. 1859 by Captain G.F. Atkinson of the Bengal Engineers, readers are prompted to believe that the British were the victims in the Uprising of 1857, and that the Indians were “constantly excited and intoxicated by drugs”, attacking and disrespecting their superiors. Atkinson goes on to describe the trials of the British as “[they] were constantly exposed to hand-to-hand conflicts with the enemy, no flesh could endure such a trial for any length of time; and the enemy knew this well, and, owing to their numbers, they were enabled to play their own game, and by incessant alarms and threatenings of assaults, the poor wearied British soldier was perpetually under arms.” 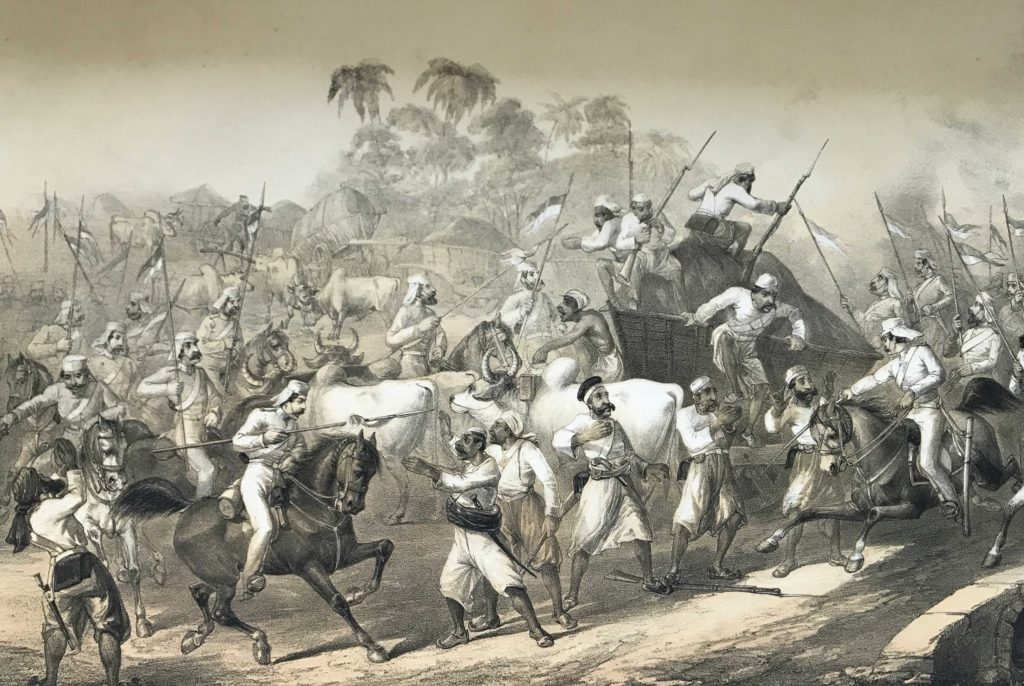 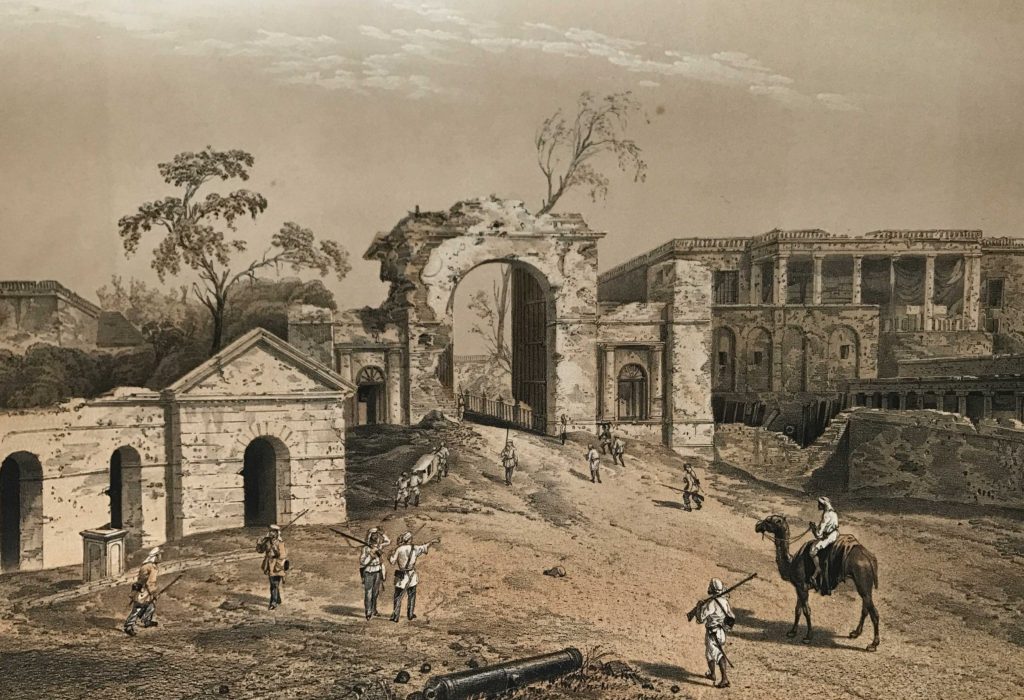 ‘The Battle Guard Battery and Hospital’ from Atkinson’s book 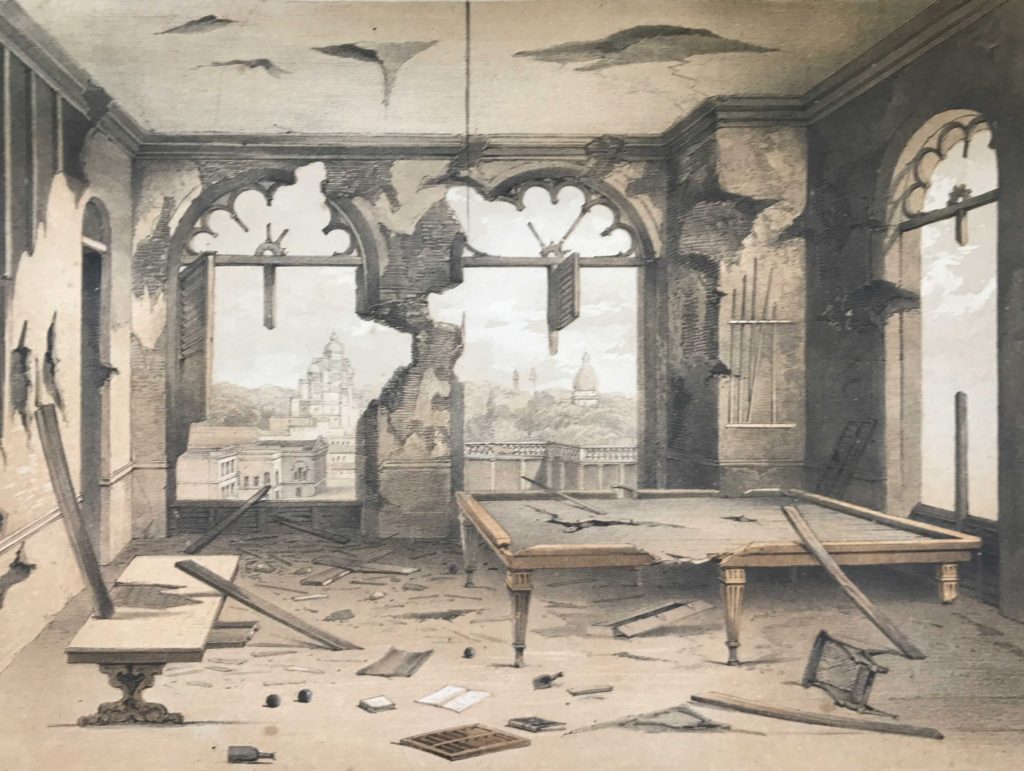 ‘Interior of the Residency Billiard’s Room’ from Atkinson’s book

Mecham too states his utter disappointment in the rebellion, using a tone of surprise that the oppressed had the audacity to fight back. His book opens with a note to the Queen quoting “the trials and hardships faced by your subjects in the East. A feat which will always remain on record to tell how Englishmen can fight, and how English men and women can die for their Queen, their country, and their God.”

Isn’t it ironic that while the British were to be applauded for being faithful to their beliefs, values and country, Indians doing the same were vilified and called hooligans? Not one of the five books written by British diplomats and officials takes into account the perspective of the Indian people. The truth of the British as invaders and oppressors stood undisputed for a long time. Modern historians, of course, have dismantled many of these narratives. Recently, Sarmaya Talks speaker and the highly respected historian Rudrangshu Mukherjee explained exactly what made this year so significant to Indian history—it briefly allowed us the opportunity to voice our dissent, take charge of our land and attempt to write a better future for ourselves. Watch the full talk here.