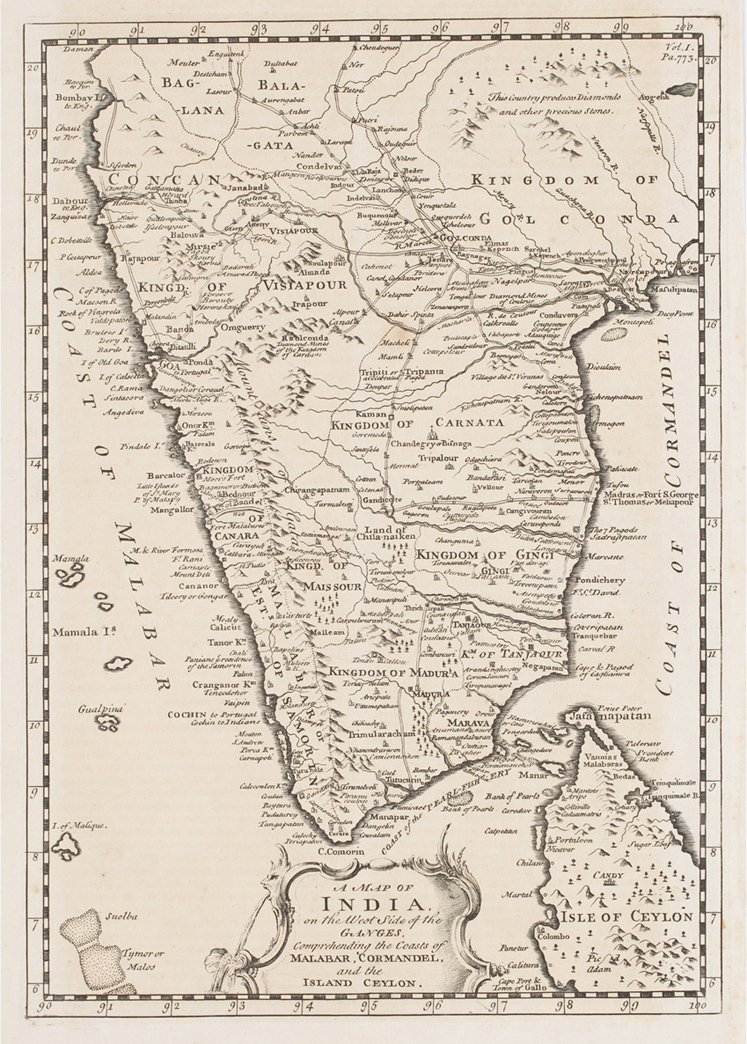 The Kingdom of Mysore began its life in the 14th century under the thumb of the Vijayanagara Empire; as the fortunes of the latter fell, those of the Wodeyars ruling Mysore rose. By 1565, Mysore was an independent kingdom and it kept expanding to take in swathes of present-day Karnataka and Tamil Nadu, including cities like Bangalore and Coimbatore. Its career as a southern empire peaked under the rule of Haider Ali and Tipu Sultan. Their ambitions touched Malabar in the south and Bellary in the north, and even reclaimed some territories that had been previously lost by the Wodeyars, like Coorg. Mysore’s military march led to frequent collisions with neighbouring powers, like the Marathas, the Nizams and the emerging menace of the British East India Company. Of these, Tipu rightly judged the British to be the deadliest threat. They would finally defeat him—after four wars—in 1799 and return Mysore to the Wodeyars, who by now owed the imperial forces too much to be any real danger to them.

Dipping into Sarmaya’s vast collection of maps, engravings and photographs, we roam the cities, forts and countryside once ruled by Tipu Sultan. Many of these historical works of art were made a little before or immediately after Tipu’s reign, which lasted from 1782 to 1799. 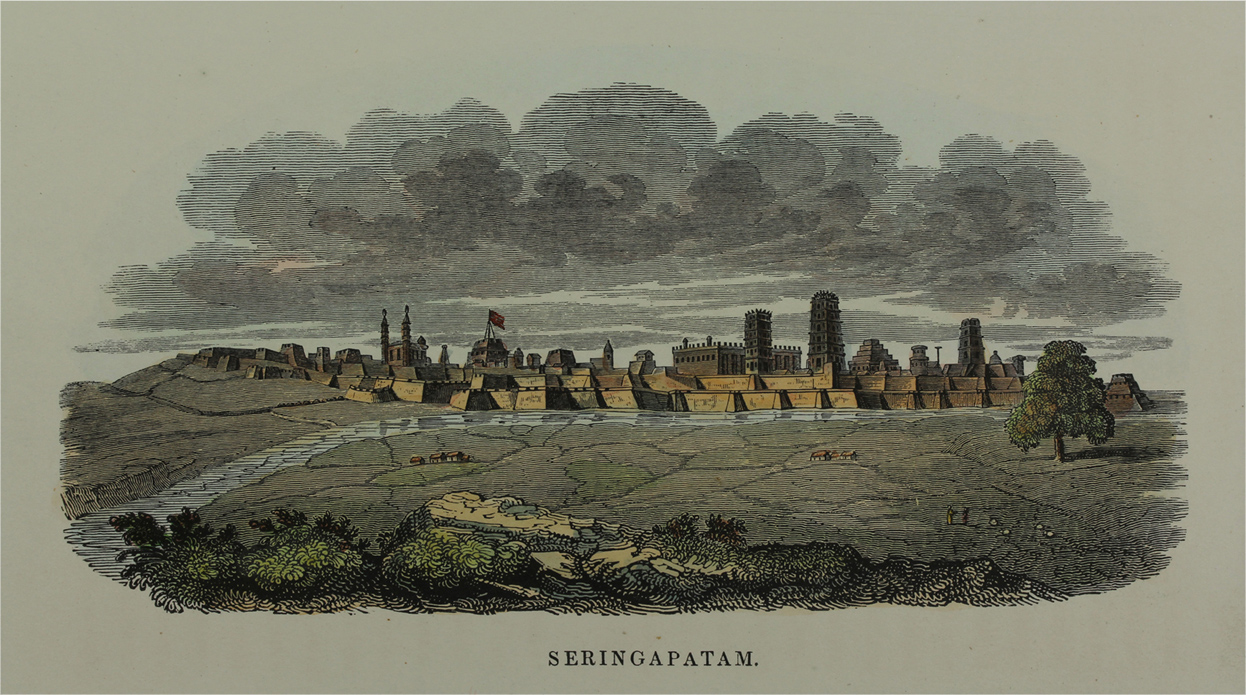 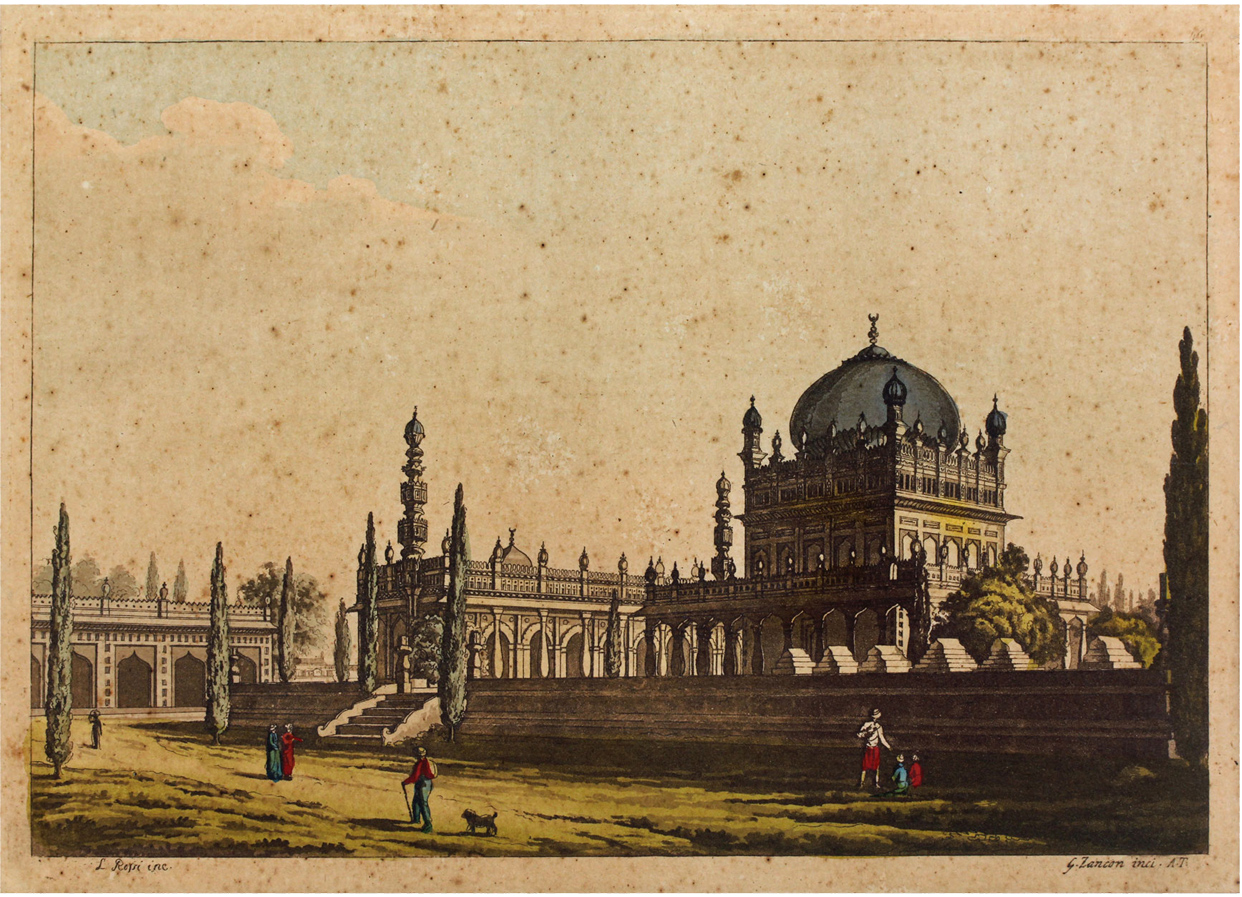 Named for its biggest attraction, the Ranganathaswamy Temple, Srirangapatna (corrupted to Seringapatam by the British) was the capital of Tipu’s Mysore. As an island on the Cauvery river, this naturally fortified city gave its rulers protection from surprise attacks. To a landscape of ornate Vaishnava temples, Tipu added stately mosques and a summer palace. This is also Tipu’s final resting place. The domed mausoleum that holds the remains of Haider Ali, his wife and son was built on a raised platform in the middle of a landscaped garden. The dome is supported on granite pillars, and, inside the mausoleum, the walls are decorated with tiger stripes, the official insignia of Tipu. Cypress trees, traditionally a symbol of mourning in the Islamic world, surround the building. 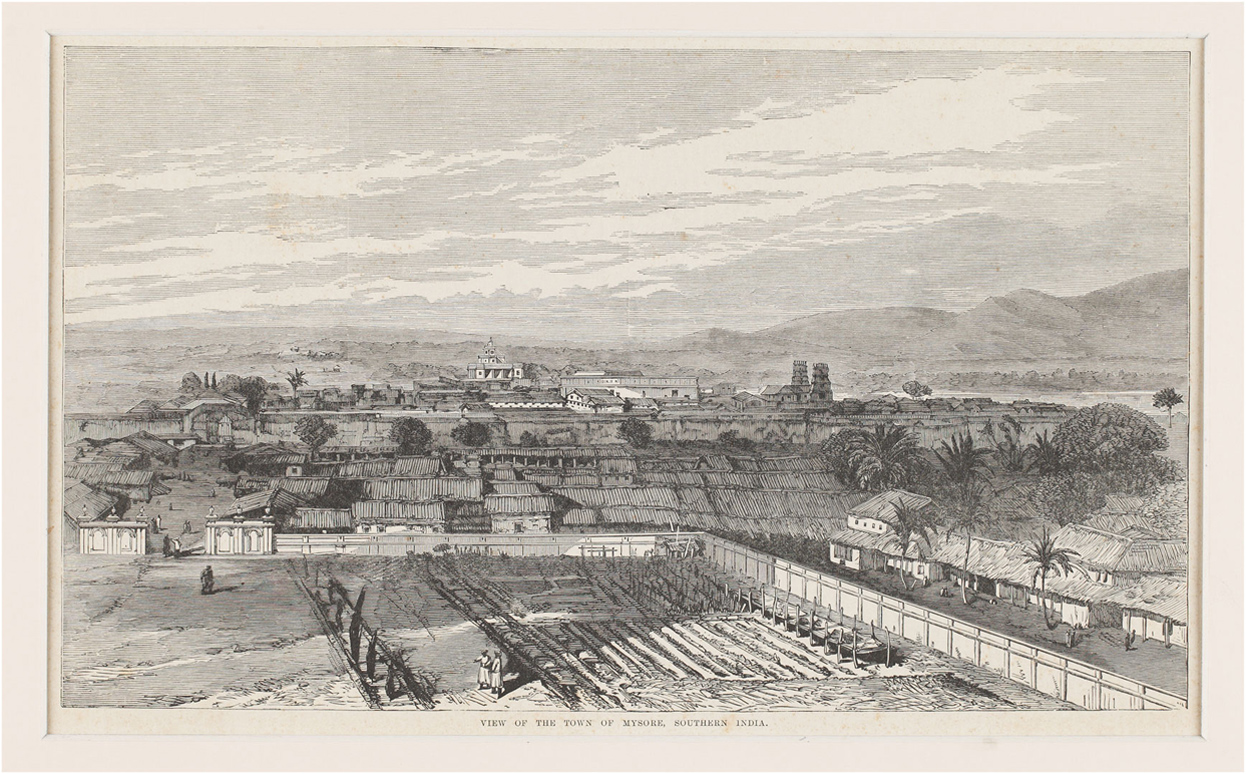 View of the Town of Mysore, Southern India, an engraving in The Illustrated London News

Although the capital of the kingdom shifted away from Mysore during the time of Tipu Sultan, both man and city influenced each other in small and big ways. During his reign, the ‘chitragars’ or painters of Mysore continued to enjoy royal patronage. The walls of Tipu’s summer palace were covered in Mysore paintings. Important events like the Battle of Pollilur aka the Second Anglo-Mysore War are immortalized in murals on the walls of Darya Daulat Bagh in Srirangapatna. It is also believed that Tipu sowed the seed for Mysore’s silk industry, one that thrives to this day. 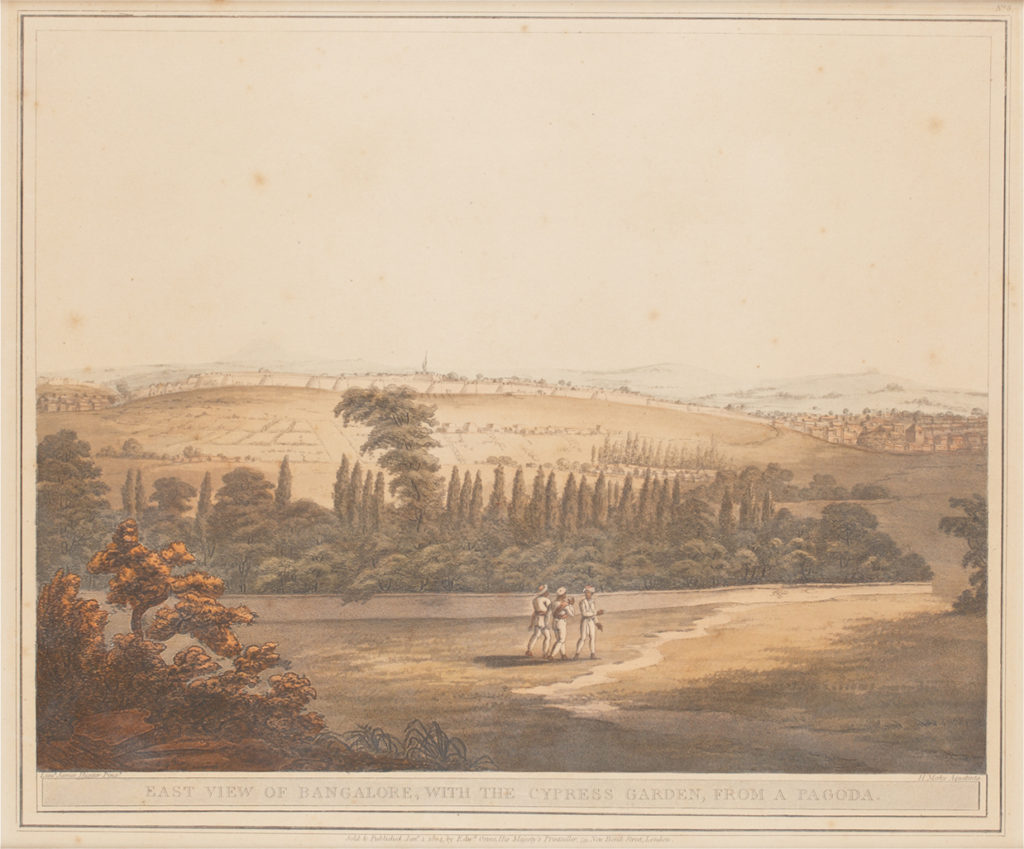 East View of Bangalore with the Cypress Garden, from a Pagoda, an aquatint engraving by H Merke after a drawing by Lieutenant James Hunter

Tipu was born in Devanahalli on the outskirts of Bangalore and spent his time between the city, Srirangapatna and Nandi Hill. He once commanded a massive fort here and built a palace he called the ‘Envy of the Heavens’ or Rash-e-Jannat. The fort was a crucial stronghold especially against the British who stormed the guard in 1791 after 20 days of fighting. 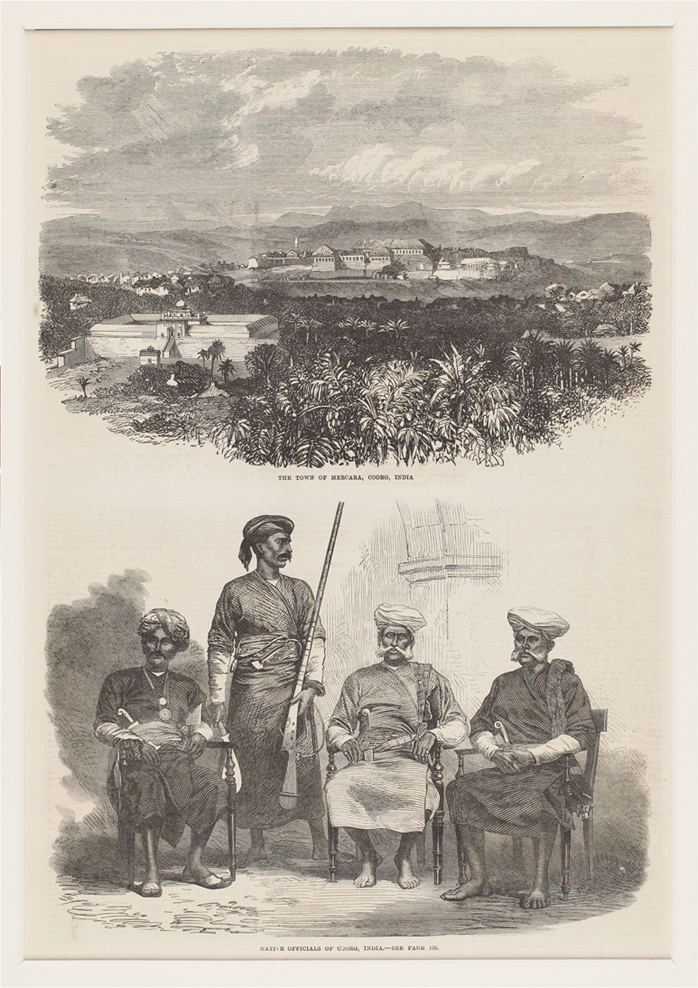 Native officials of Coorg, India, an engraving in The Illustrated London News

The Kodava kingdom of Coorg bitterly opposed the expansionist Mysore state under Haidar Ali and Tipu Sultan, resulting in one of the most violent rivalries in South Indian history. After decades of resistance, Coorg, finally annexed by Haider Ali in 1780, was ceded to the British following Tipu’s defeat in the Third Anglo-Mysore War in 1792. 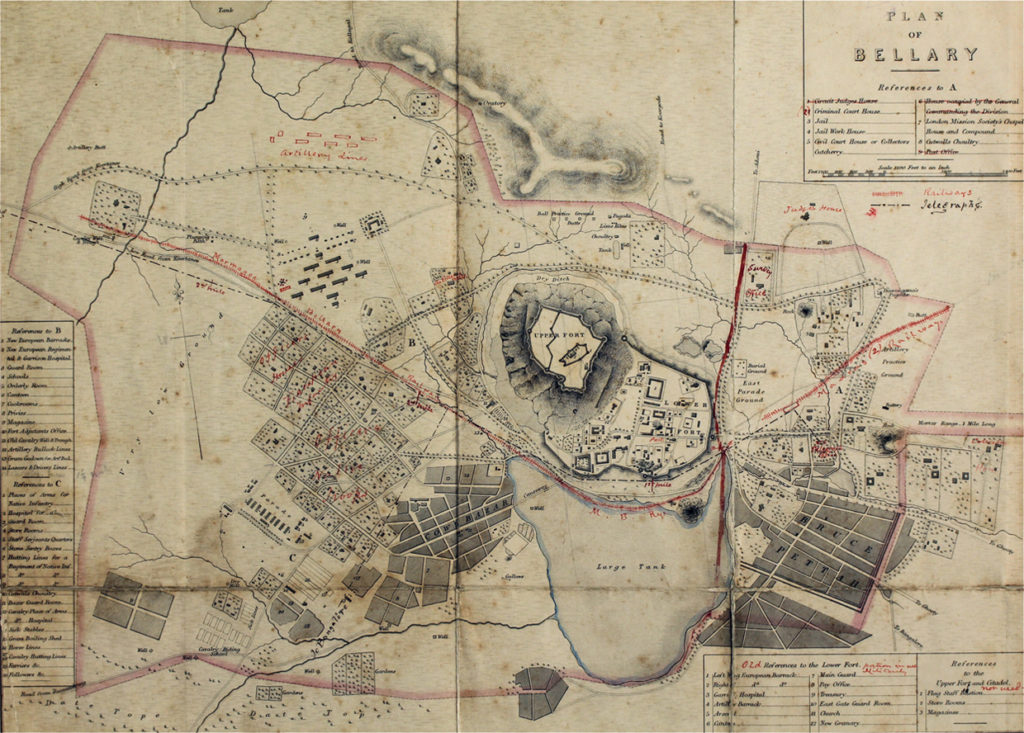 Not only was Bellary the site of an important fort built in part by Haider Ali, it’s also a region that reaped the benefits of his son’s scientific temper. Tipu is considered a pioneer of the prodigious mining industry here. He is said to have extracted minerals like copper to build superior weapons, like war rockets. 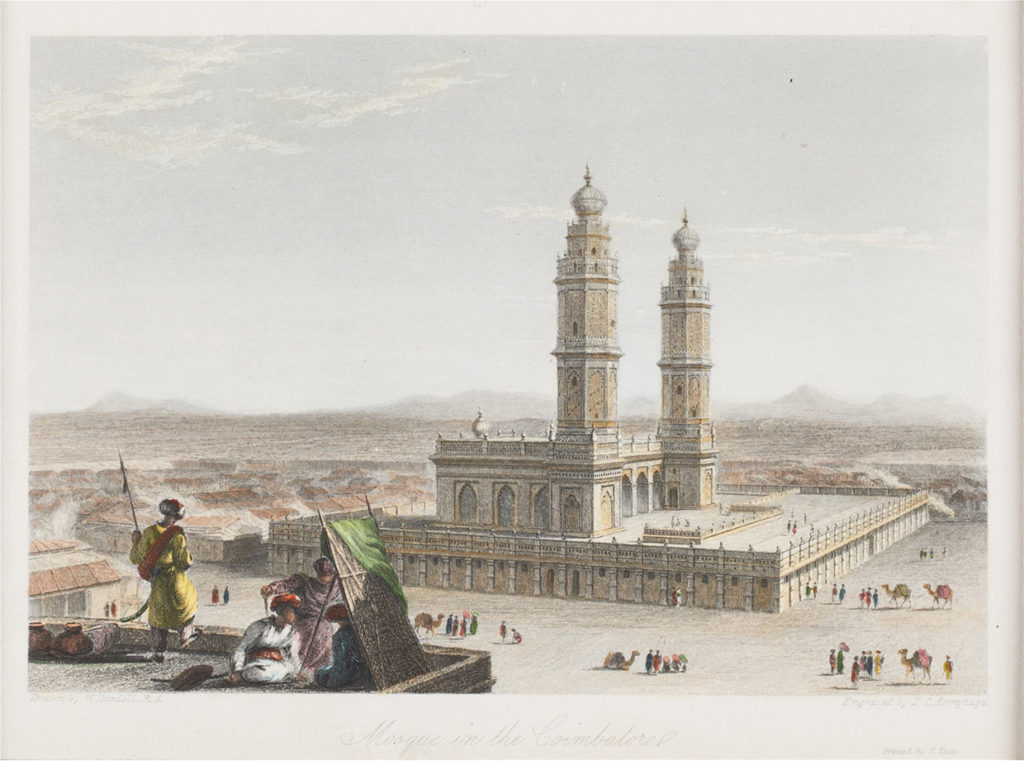 Mosque in Coimbatore, an engraving by J C Armytage based on the art of William Daniell

A hotly contested territory during the Anglo-Mysore Wars, Coimbatore changed hands between the two sides quite a few times before being annexed to the British empire after Tipu’s death. It was a city close to the heart of both Haider Ali and his son, who built and patronised some beautiful mosques here. Interestingly, a likeness of Tipu was even found etched on a pillar of the Venugopalaswami Temple in the city.

According to a Bangalore University research paper, there were nearly 208 forts functioning in the Kingdom of Mysore during the reign of Haider Ali and Tipu Sultan. Some were large fortified areas—Srirangapatna, Bangalore, Nandidurga—and the other, lesser ones were spread across the territory and concentrated in the borders, like Hosur Fort or Ryacotta Fort in the Baramahal region between Mysore and Tamil Nadu. These forts lost much of their glory after the fall of Srirangapatna and in many cases, all that remain now are engravings like the ones below. These were made by British artists, including military men like Lieutenant Colonel James Welsh and Thomas and William Daniell, whose series titled ‘Oriental Scenery’ was a best-seller in the early 1800s. 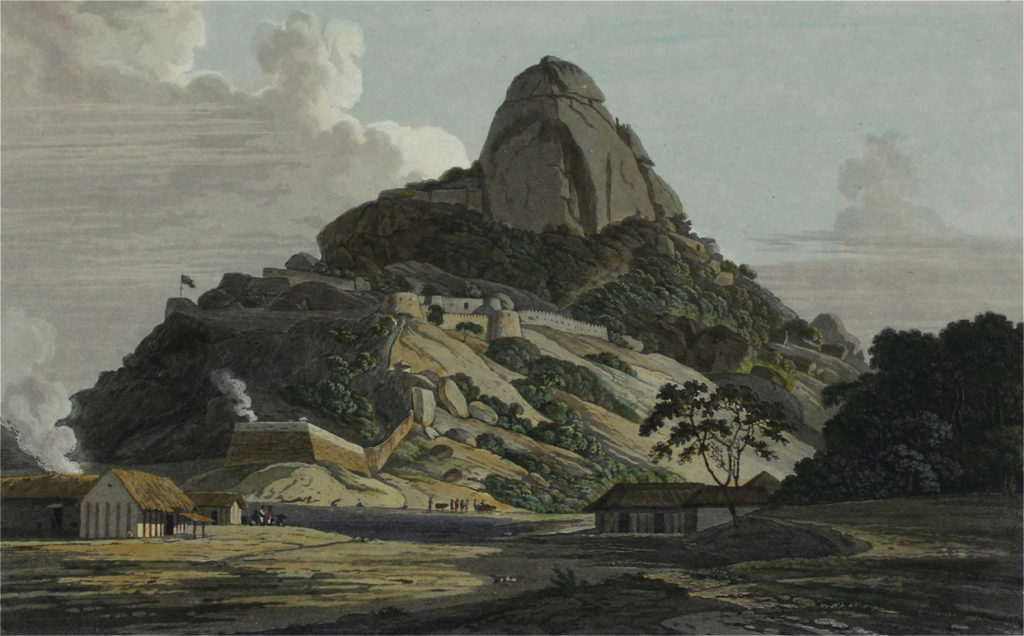 Ryacotta in the Barramah’l, an engraving published by Thomas & William Daniell 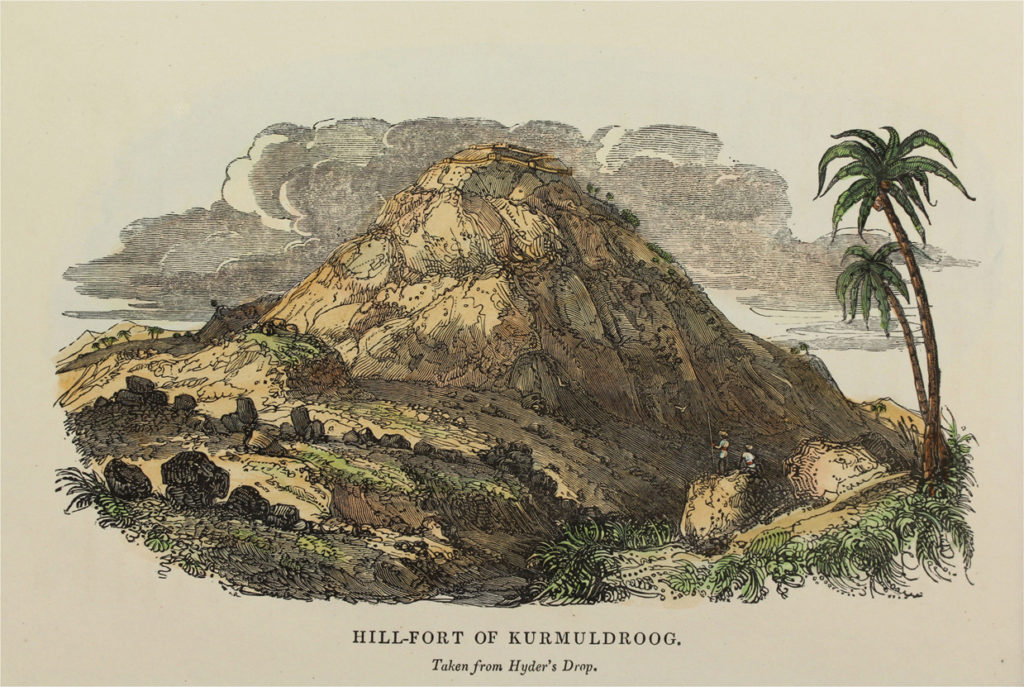 Hill-Fort of Kurmudroog, an engraving after a drawing by Lieutenant Colonel James Welsh 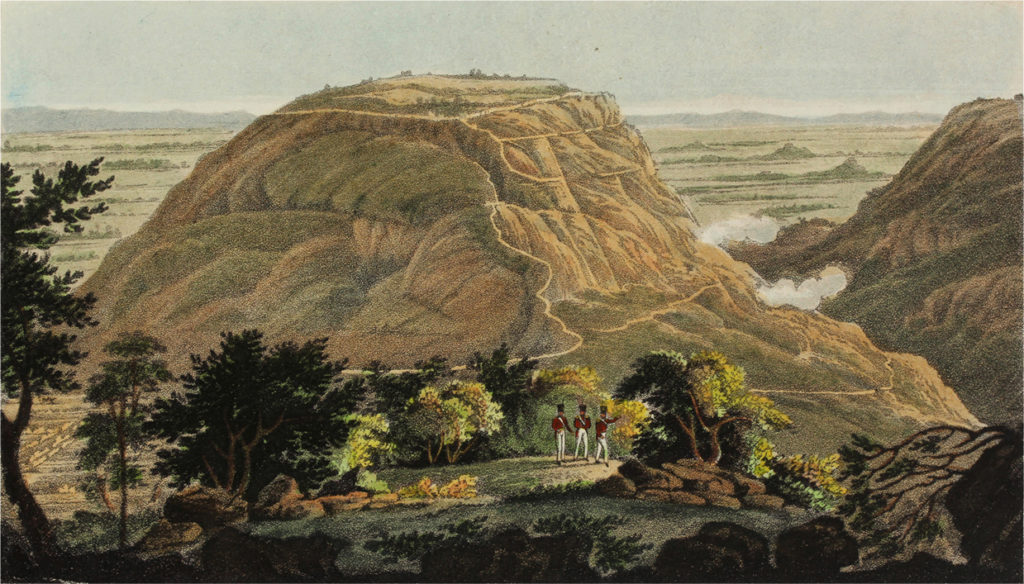 The Hill Fort of Nundydroog in Mysore, an engraving published by Colonel Welsh and R Havell 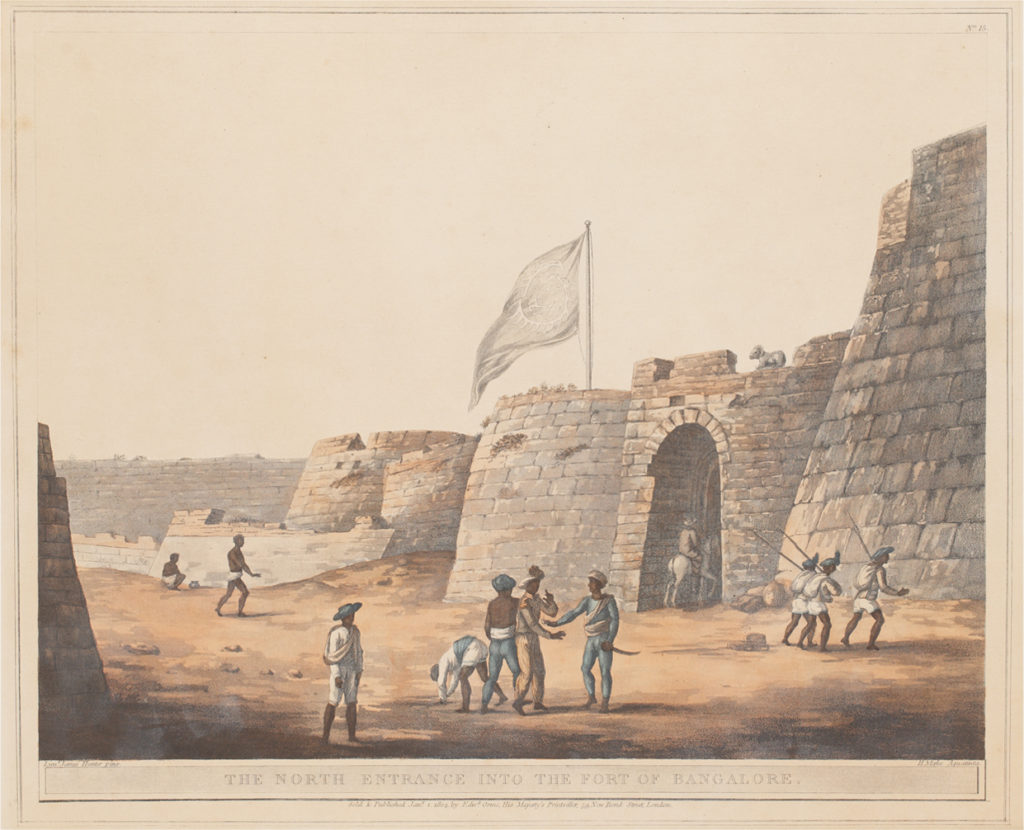 The North Entrance into the Fort of Bangalore, an aquatint engraving by H Merke after a drawing by Lieutenant James Hunter 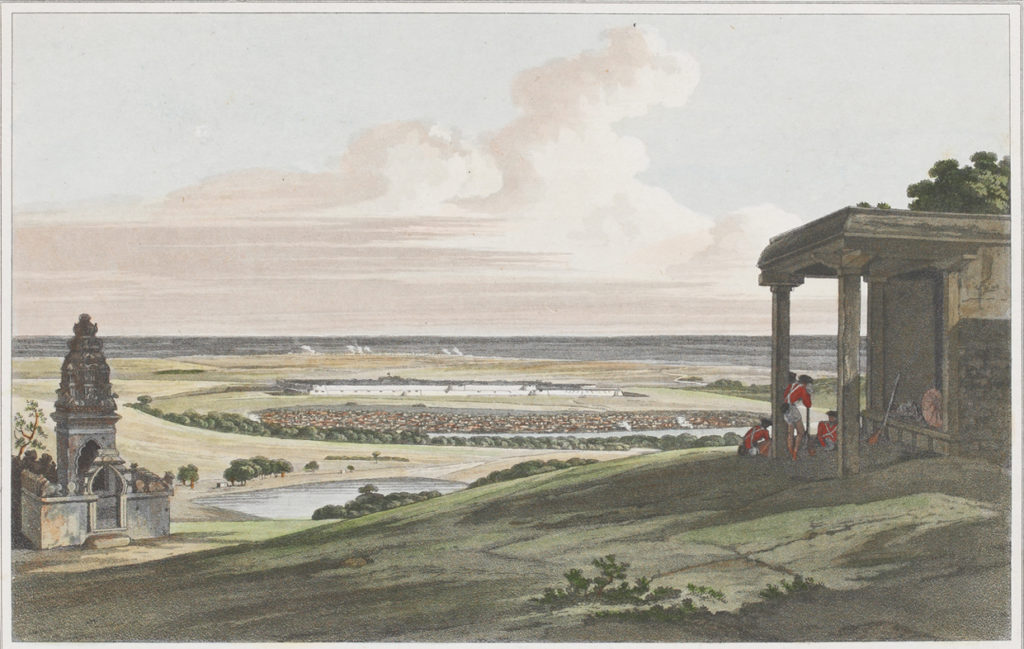 Ousoor in the Mysore, an engraving published by Thomas & William Daniell