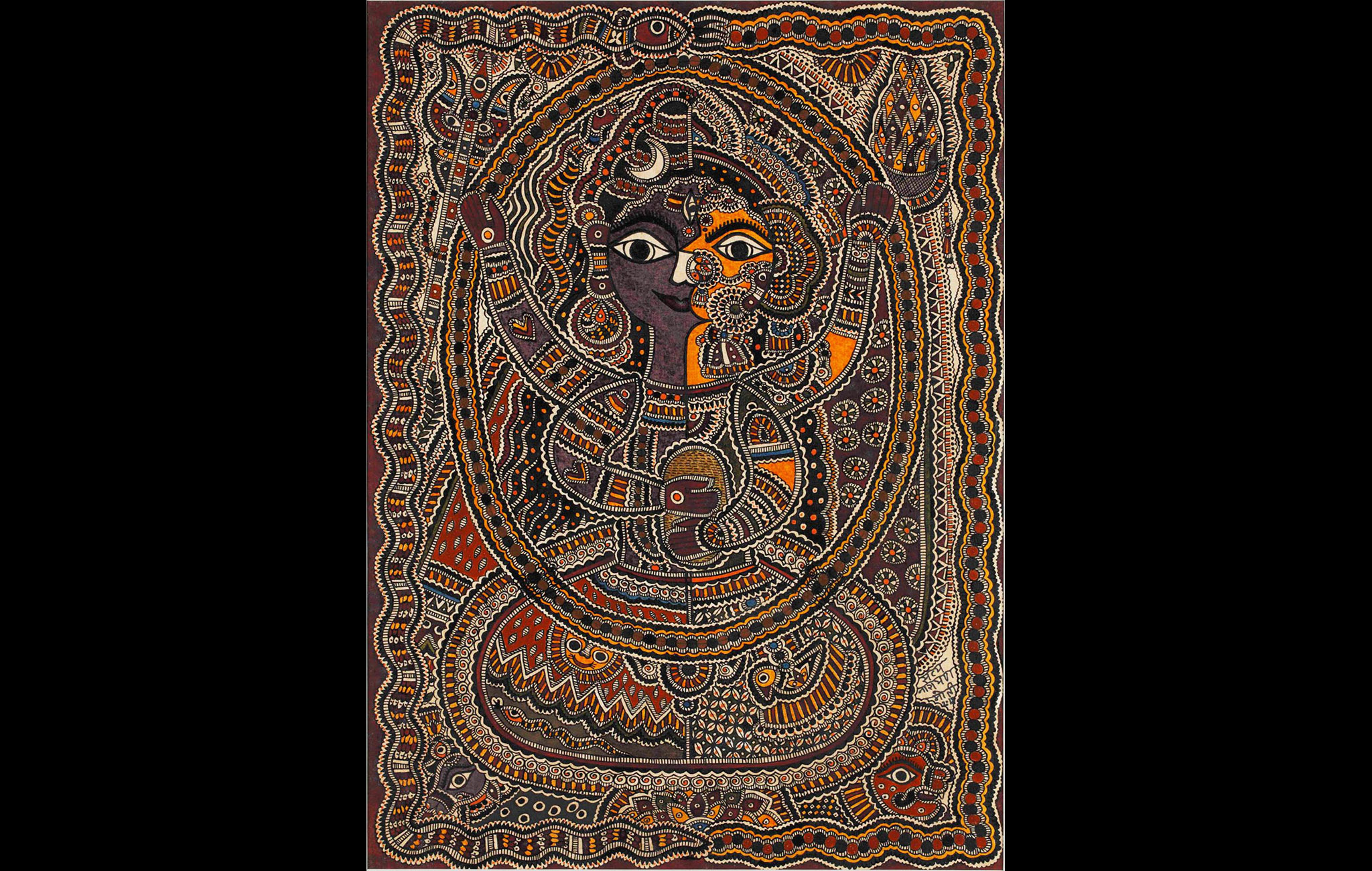 The theme of this painting is religious, it showcases the deity, Ardhanareshwar. The right side of the central figure of the painting is Shiva and the left, Parvati. In rare depictions of the Shakti cult, Parvati is shown on the right because the group believes the Goddess to be the creator of all beings, and it is the male form that merges into her to form the being of the Ardhanareshwar.

The form is depicted with 8, 4, 3 or 2 arms. Shiva is seen with a jata-mukata (matted hair bun) and a crescent moon ornament. Shiva wears a large earring called a Kundala or a serpent earring called the sarpa-kundala. The third eye is depicted on the Shiva side of the forehead as well. Shakti wears a karada-mukuta (A basket crown) on her braided hair as well as on top of her veil. She too wears a large earring. Both the male and female forms of the Gods ride their respective vahanas; nandi and the lion. Sometimes they are also shown seated on a lotus together.

In the Mithila style, Shiva is often shown facing the front and Shakti is shown in profile, as seen here.

Moti Karn is a renowned Mithila artist. She is the daughter of master artist Kapuri Devi, who encouraged her to pursue the art form from the tender age of six. Initially, Moti learned to paint on the mud walls of her home in the village, and as time progressed she began painting on paper and canvases. At the age of 16 she married Satya Narayan Karn, who himself was a painter. Soon after their marriage, Satya Narayan and Moti moved to Delhi, where Satya Narayan acquired a job as a teacher in the government organisation Bal Bhavan. Satya and Moti often made collaborative compositions on paper or canvas, they also have a combined signature ‘Satya-Moti’.

Satya and Moti belong to the ‘Kayastha Karn’ caste– traditionally the chroniclers of stories, but the duo paint in both the kachni and bharni (Brahmin) styles. They jointly received the National Award for their combined efforts in preserving and taking forward the art of Mithila painting, in 2003. Satya and Moti together developed their own unique style of painting that involved the use of fine-line detailing that densely covers the entire composition of their paintings. Satya Narayn passed away in 2015, at the age of 63.

Moti Karn continues to paint in both their names as a tribute to her husband. Moti Karn has made several paintings on religious and secular subjects, she says that she uses the traditional two-line border in her work as it is considered the parallel lines of Shiv and Shakti. She draws the eyes of the deities at the very end of the painting process, as it is believed that once the eyes are painted, the atma or the soul of the deity enters the painting.