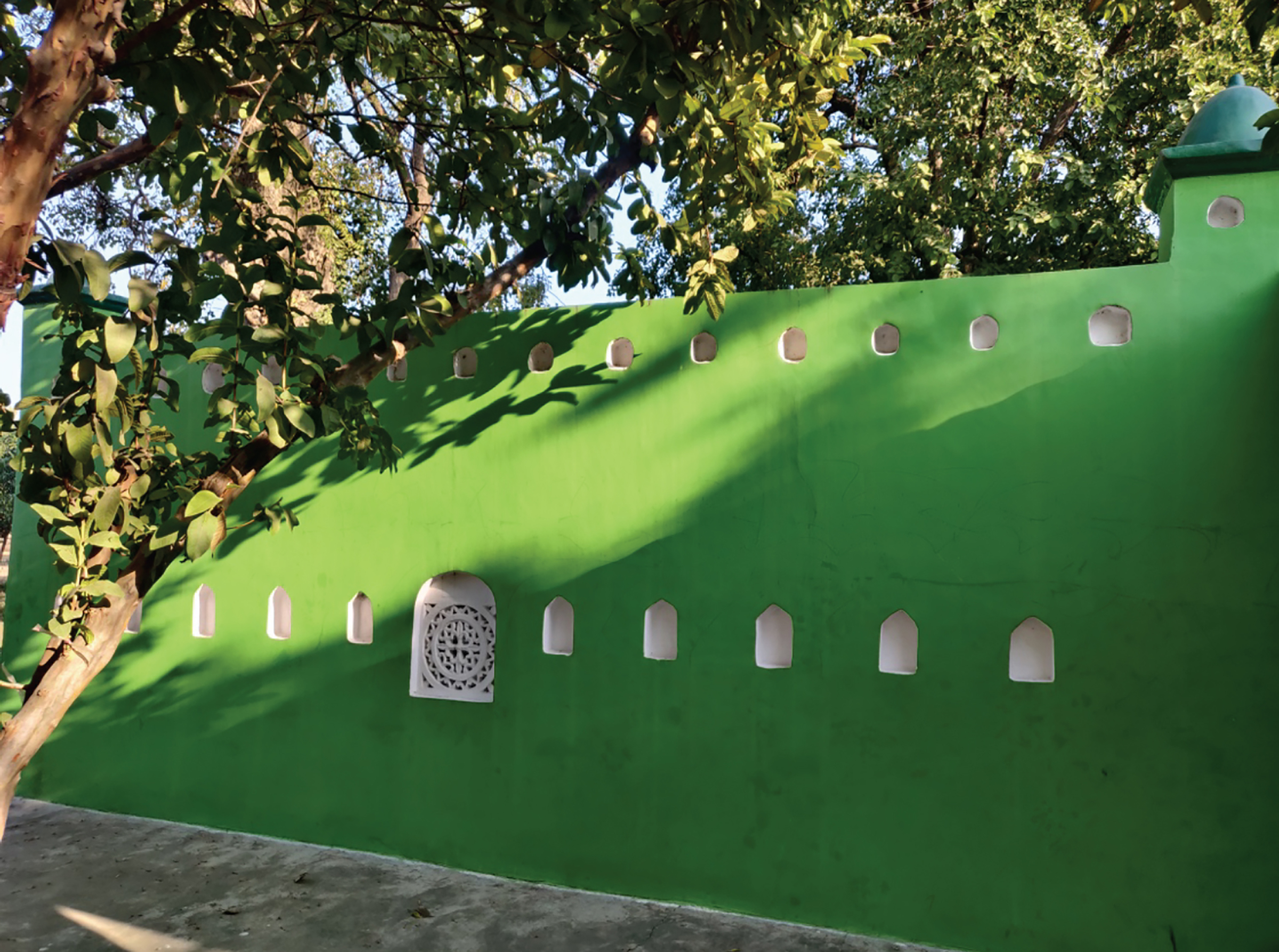 My mother introduced me to music and poetry, and it was through her that I acquainted myself with the voices of Mehdi Hasan and Begum Akhtar, and the spellbinding words of Meer, Ghalib, Allama Iqbal and Altaf Hussain Hali. Interestingly, my introduction to English was through Urdu – I got to know of poetry by Wordsworth and Shakespeare through their Urdu translations.

My favourite shaghal1 was either watching my mother make entries in her diary, which I would try to copy, or making beds of dried leaves in the Haji Bagh, a mango orchard in front of our house. I don’t remember visiting any place outside Najibabad with my family. But my parents took me and my two brothers to visit forts, Baradari, Jama Masjid and small Mughal architectural ruins nearby and told us many fascinating stories about places and myths people believed in. 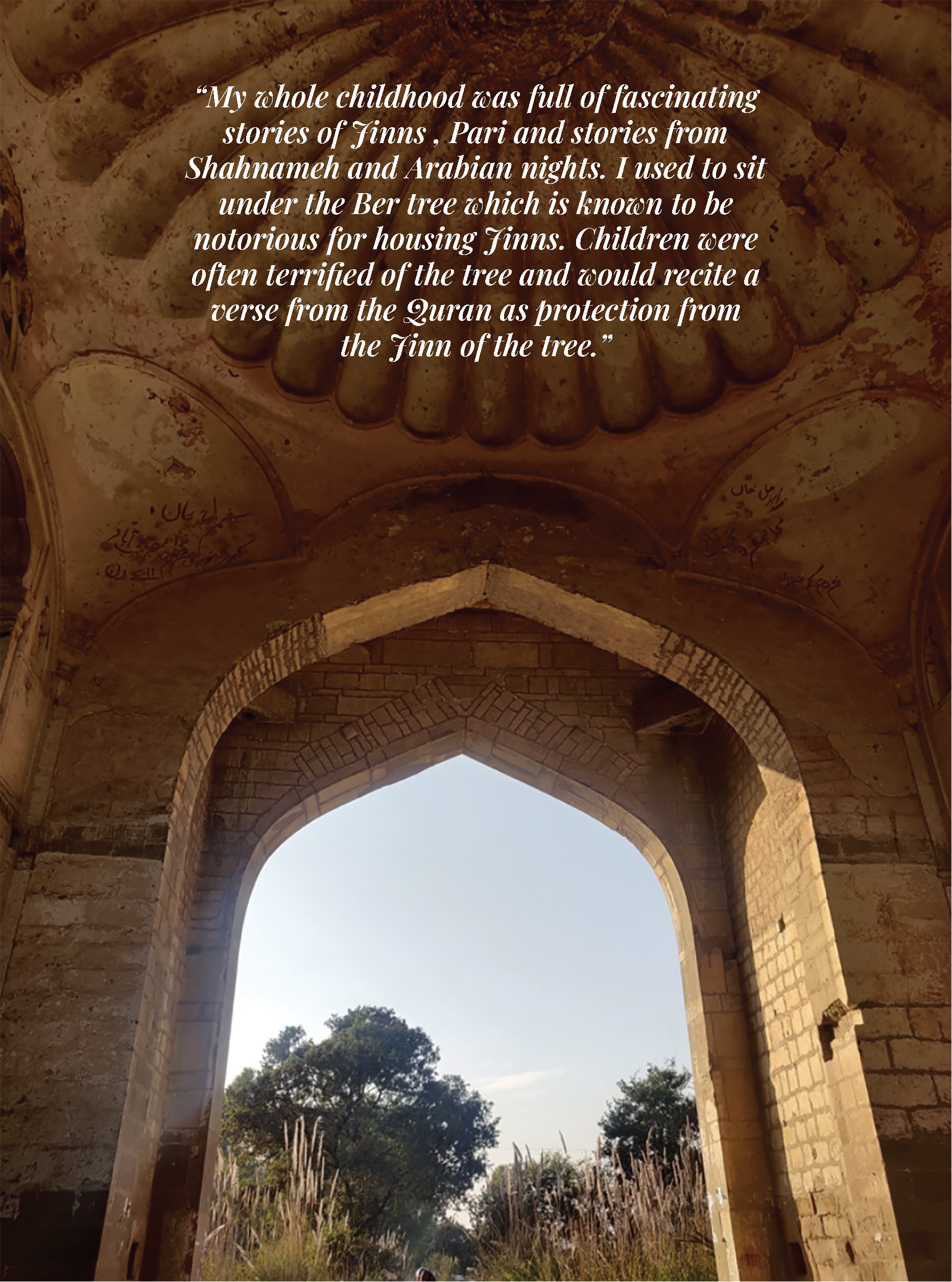 I spent my early childhood in our village haveli. It was big and split into several compartments and rooms, but among these were several hidden doors and roshandan2 so one could easily sneak into someone else’s home. The whole haveli was connected with a large central dalan3 where my mother taught me to read and write. I remember quite vividly this memory of me sitting under the guava tree in the haveli’s dalan and applying a paste of multani mitti4 on a wooden takhti5 and putting it out in the sun to dry.

Alif 6, the first letter of the Arabic/Urdu alphabet, was the first thing my mother taught me to write, gently holding my hand as I made the letterform on the takhti. Later, a Sufi scholar and moulvi7 in the madrasa near my house was appointed as my Arabic tutor. I would do my homework of writing the Arabic alphabet on the takhti, using a kalam8 and ink made by crushing and soaking these small and hard black tablets. I used to spend a lot of time with friends in search of good reeds to make the kalam.

My process of creating an artwork is laborious- especially preparing fabric, soaking it in rain and applying papier mache like a paste to hide the roughness of fabric, making it appear like the earth. I like zameen9 as a concept and I am constantly trying to create an effect of the earth of whichever city or country I am visiting, using papier mache. Then comes the process of making different dyes from fruits and vegetables; wildflowers, pomegranate and saffron are among my favourites. I really enjoy this process as vudhu10 and creating work itself is like visiting a shrine under a tree on a hot day, or like offering namaz. The initial exploration of this process took a lot of time and in a way prepared me for my journey towards the creation of an artwork. One can call it ibadat11. 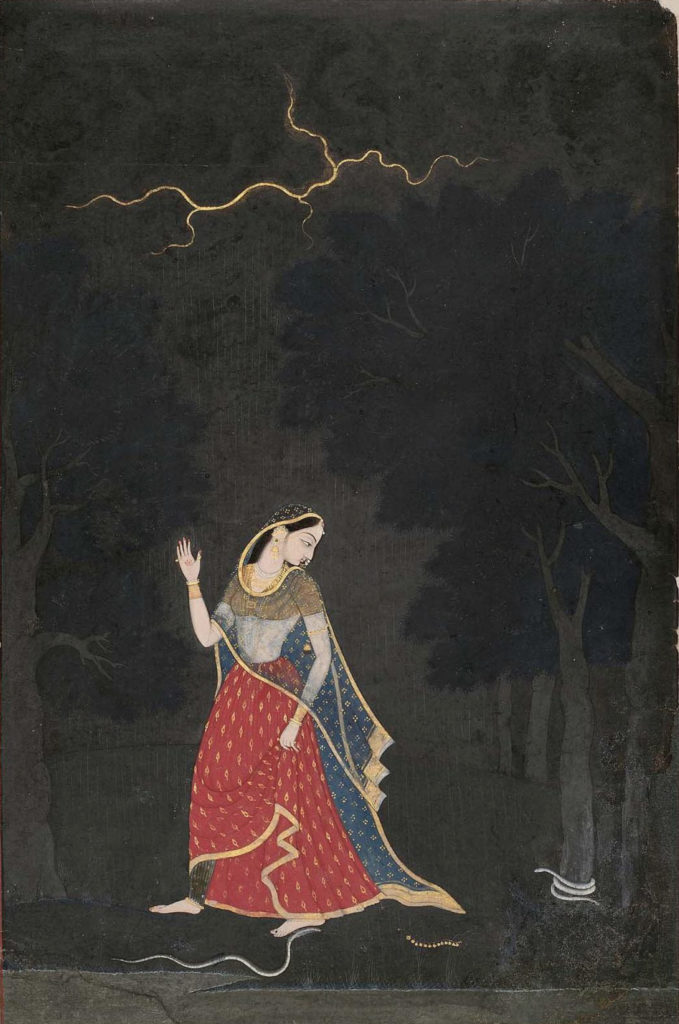 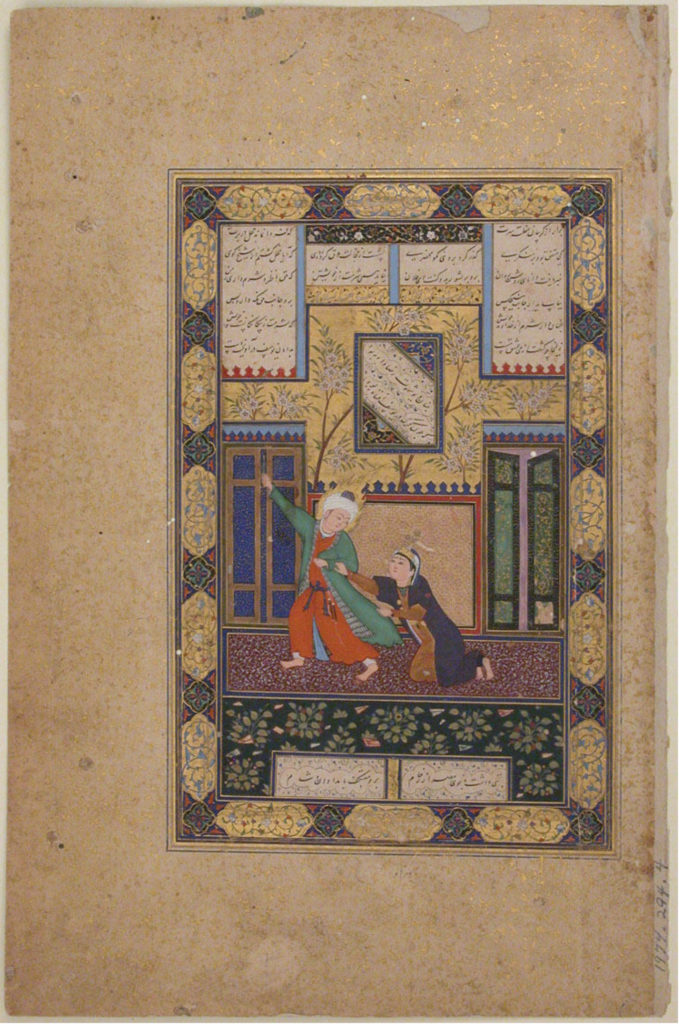 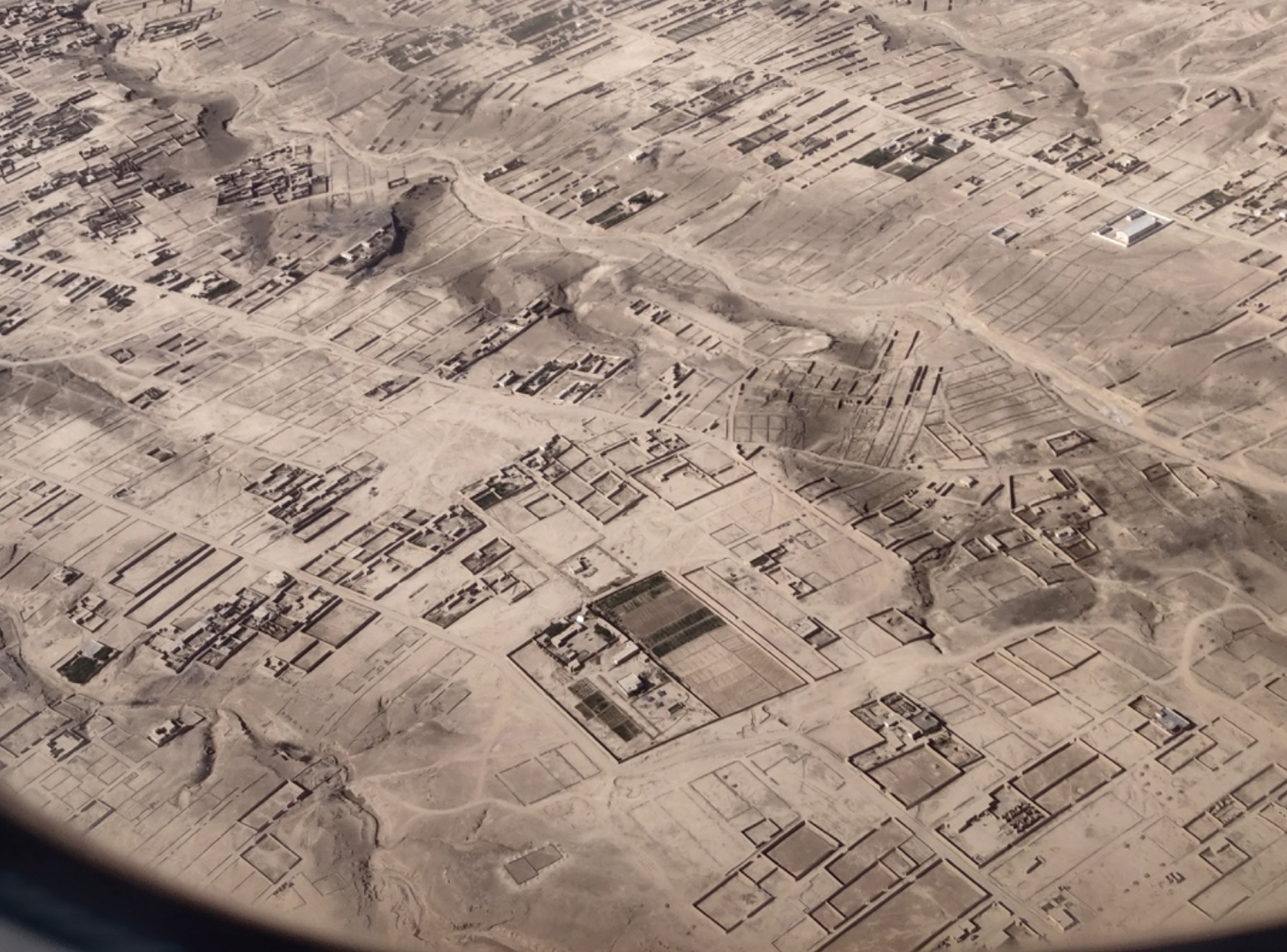 The aerial view of Kabul is the inspiration for how I divided space in my artwork and the earthy texture was achieved by applying papier mache on fabric. The view reminds me of the fascinating Khurasani/Persian/Mughal and Pahari Ragmala miniatures. 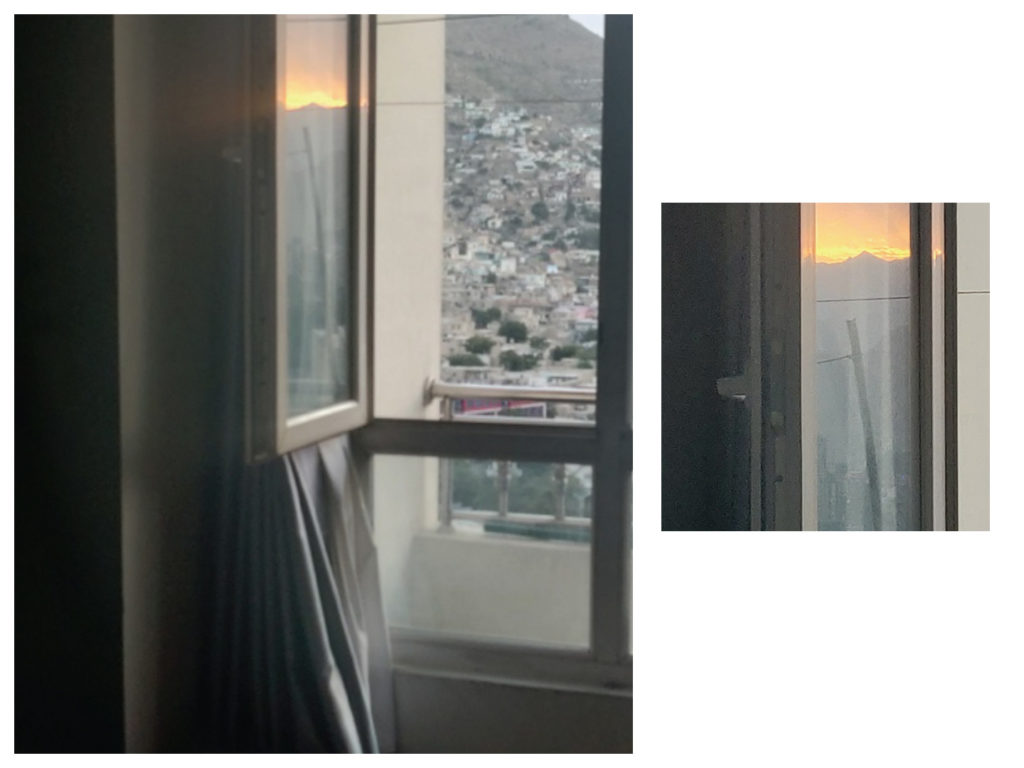 The play of sunlight on earth fascinates me when I look at Kabul’s aerial view. Also, the works which are now part of the Sarmaya collection are inspired from Koh-e Asmaai (mountain of Goddess Asmai) which was in front of my apartment. The religious history of Afghanistan always intrigues me – from Ilaha-e Bakhtar (Goddess Bactria/Goddess Nana), Goddess Asmai to hundreds of goddesses of Kafiristan (now Nooristan) destroyed by Muslim invaders. 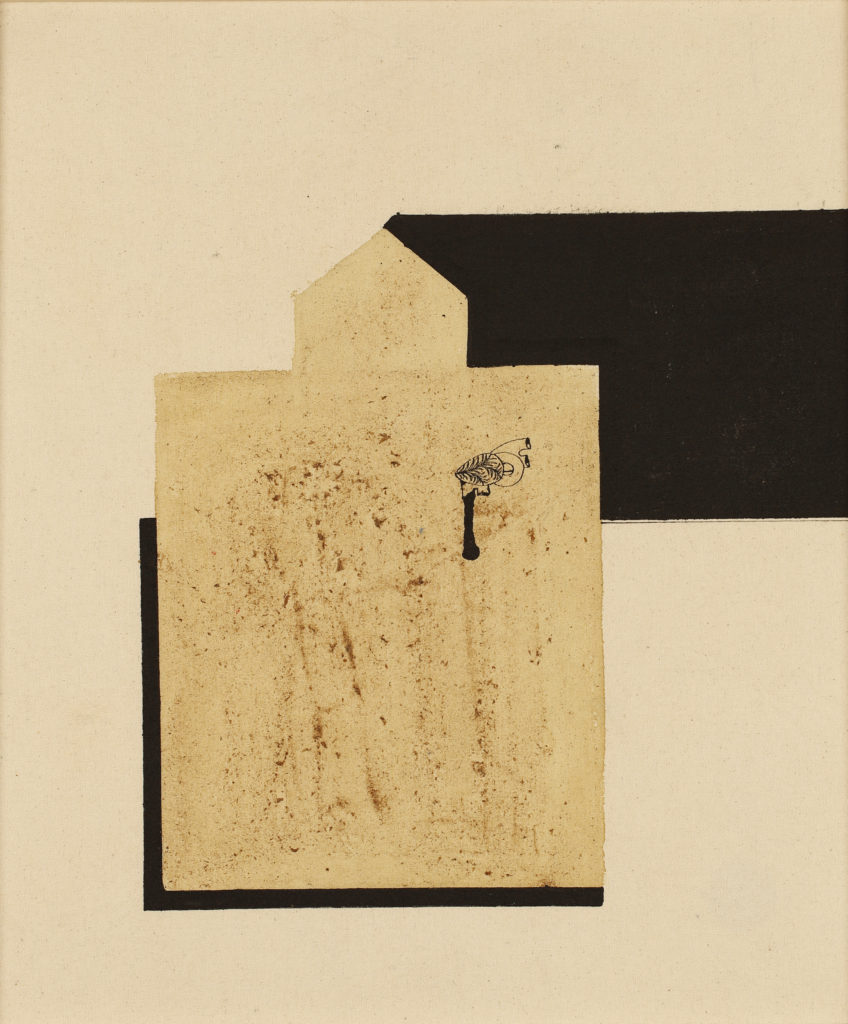 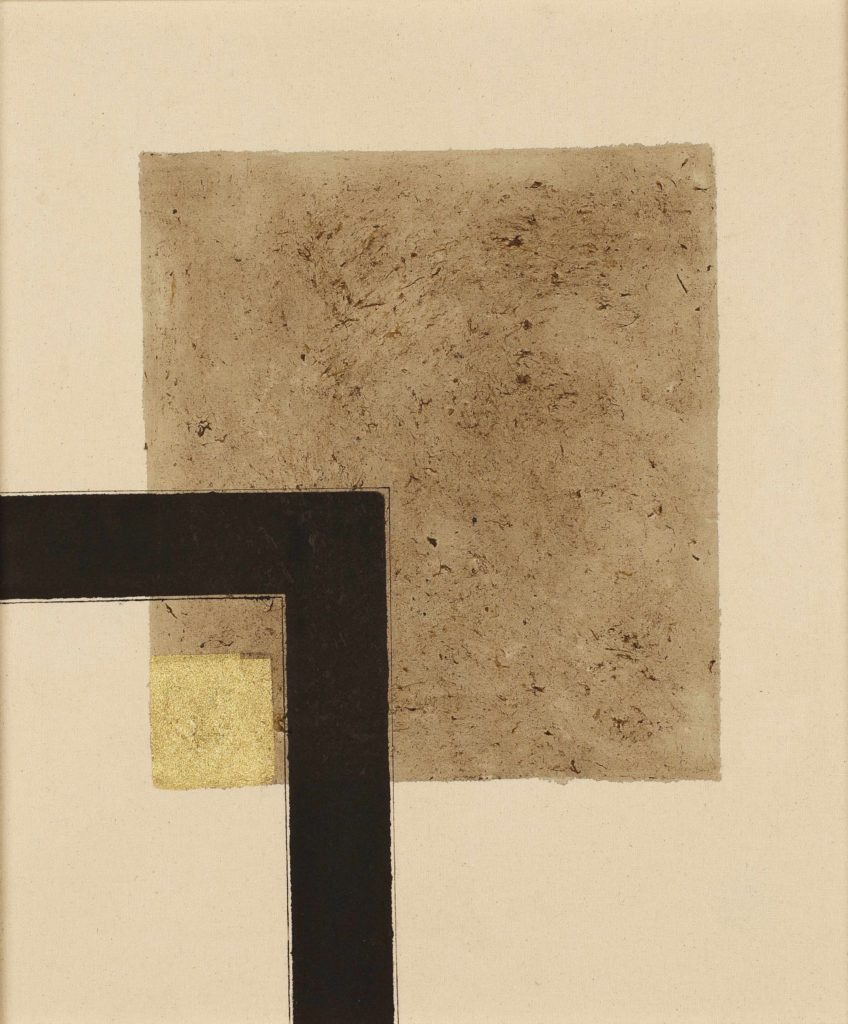 The history of goddesses in Afghanistan constantly makes me question the present reality of being a woman in Afghanistan. I want to quote an ashaar13 by Nadia Anjuman, a known contemporary Afghan poet, who was beaten to death by her husband for writing poetry.

What I mean when I speak about the sun touching the Koh-e-Asmai and the light overcoming the darkness of the night is my interpretation of that lamha, that moment, thinking about the Goddess Asmai and twilight, seeing bhor and saanjh, dawn and dusk, as two lovers leaving their messages on the mountain of goddess Asmai. I relate this to the unspoken words of Havva in search of wisdom, after separating from Adam, when she sees this act of day and night at the mountain of Asmai. I want to explain this pain of being in love and being separated, with an ashaar from Rumi: 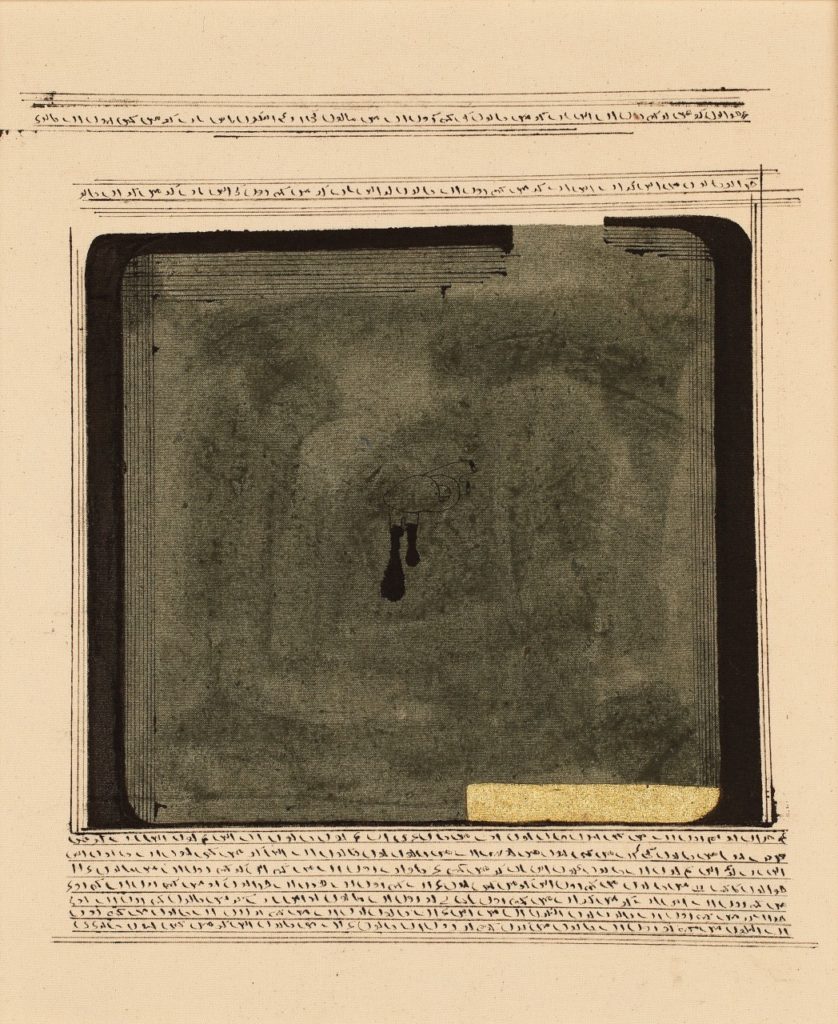 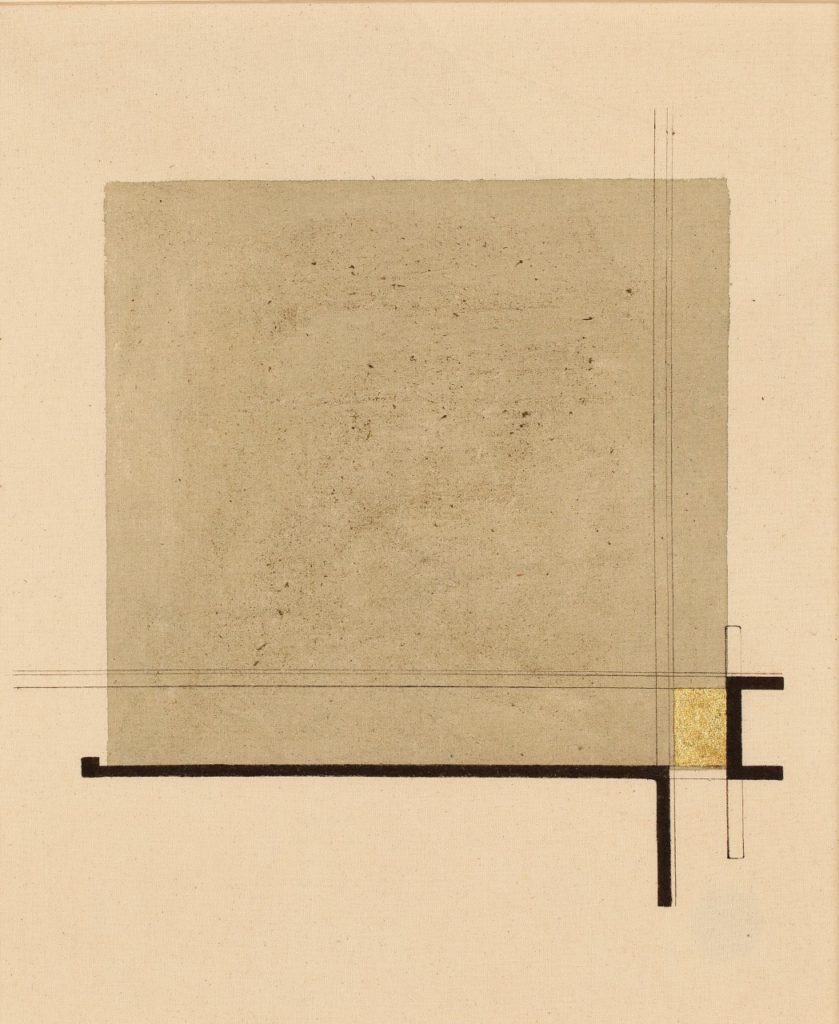 “The male gaze is inescapable – but what about a woman’s perspective. Why didn’t history talk about that? It has been a big question to me since my childhood.  Now, here I am, more interested in Havva’s point of view; being vulnerable and feminine and almost untouched. Adam or Yusuf, or any other men from history for that matter, don’t need my focus.”
Since childhood, my mother instructed me to read Islamic text and history. Her little library consisted of many books from Ghalib to Taurait. The text and histories always focussed on men- what a man does, why and how important it is to be an Adam or Yusuf but not Havva (as Eve is called in Arabic) or Zuleikha. In Islamic text and history, we have women like Havva who pushed her husband to eat the forbidden fruit and Zuleikha who was very much aware about her sexuality and femininity. When my mother used to tell us bedtime stories from Shahnameh or Arabian Nights and stories from Persian folklore, it was always about the struggle of being a woman whether she is a princess or a ragged, poor girl.

Everything somehow becomes a part of who I am and what I am doing. Now, here I am, more interested in Havva’s point of view; being vulnerable and feminine and almost untouched. Adam or Yusuf, or any other men from history for that matter, don’t need my focus; they already have had their parts written by male counterparts. I remember discussing this conflict of women in history with my mother and she always quoted this ashaar by Iqbal:

The picture that this world presents from woman gets its tints and scents:

She is the lyre that can impart pathos and warmth to human heart.

“Because this bleeding heart is growing inside me, what it signifies has started flowing in my blood.” 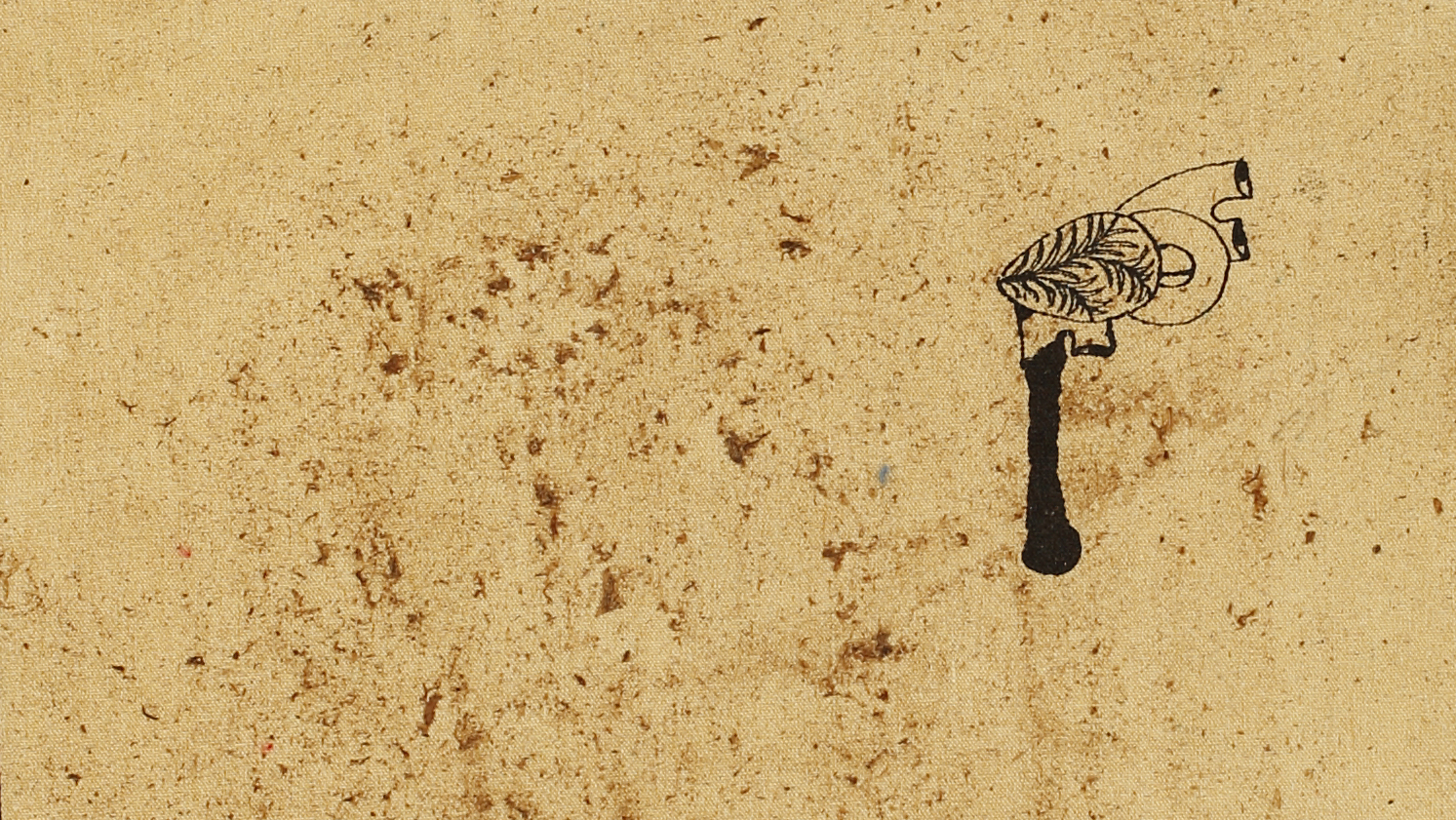 A bleeding heart is delicate and vulnerable on an extreme level. It’s the blood of pain. It is about the language no one can speak but somewhere deep down can understand. This bleeding heart is present in almost every second work; it’s not a symbol but a metaphor and I need more time to explain this in words. Because this bleeding heart is growing inside me, what it signifies has started flowing in my blood.

Merely because it courses through the veins,

I’m not convinced if it drips not from one’s eyes, blood cannot be held true.

5 Takhti – A wooden board used to practice writing.

6 Alif – The first letter of the Arabic, Persian, and Urdu Alphabet. The word ‘alphabet’ itself is a portmanteau of the first three Arabic letters; Alif, Be, Te.

8 Kalam – Arabic term for pen. Here it refers to a reed pen used in calligraphy.